A blueprint for the future 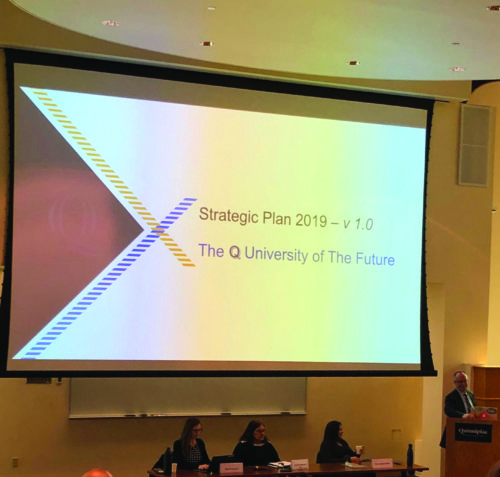 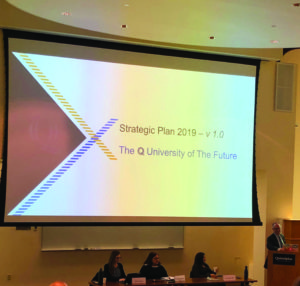 [/media-credit]Quinnipiac’s future is now in our hands–in the form of the first draft of President Judy Olian’s strategic plan, which is now public and ready to be critiqued by the Quinnipiac community.

Groups around the university have been eagerly anticipating the release of plan in hopes that it will include provisions for their respective institutions. The first draft did not delve into specifics but the highlights included a new health and wellness facility, efforts to increase diversity of students and faculty and a rich alumni connections program.

The draft, which was outlined at the Faculty Senate meeting by Executive Vice President and Provost Mark Thompson on Jan. 28, will be refined based on feedback from staff, students and faculty. The complete draft is available to students on Blackboard and can be accessed via a link in a Jan. 29 email from President Olian.

“Several town meetings are planned for faculty, staff and students over the next few weeks to provide input on the plan,” Olian stated in an earlier email on Friday, Jan. 25. “I look forward to these meaningful discussions and more constructive dialog as we chart our future.”

The schedule for the town hall meetings can be found in Olian’s Jan. 29 email as well as a link to an online forum to submit feedback.

The finalized plan will result in two versions–one for the internal community and administration and one for external audiences, according to a slideshow from Thompson’s presentation before the senate. The internal plan will be more detailed than the external plan, which aims to “energize supporters.”

The plan will include four main goals to help Quinnipiac become the “University of the Future.” These goals were based on advice and input from a diverse group of “task groups” representing all aspects of the Quinnipiac community.

The first goal is to “build and employ an institution-wide mindset that prepares graduates for citizenship and 21st century careers.” Thompson acknowledged “pockets” of career preparation across campus, but said that these areas of growth lacked support from the institution as a whole.

“The first one came directly from the task force,” Thompson said. “What the task force promoted here was a recognition. There was an awful lot of innovation taking place, but it would be best to have a centralized function that would help to coordinate that.”

The second is to create an inclusive, excellence-driven community. The focus of this goal is to attract diverse students via a new summer bridge program and academic advisers that specialize in the retention of at-risk groups.

“You all know the importance of this,” Thompson said. “Both from a human perspective, being accessible and supporting everyone who is invited to be a part of our community, not just to answer diversity numbers but to ensure that they feel value and connected in some way. In addition to that, we’d be foolish to ignore that we do have a much more diverse population that surrounds us and it is in our own best interest to serve a wide array of students.”

The third goal is to nurture and impact internal, local and global communities. The focal point of this goal includes the construction of a state-of-the-art health and wellness center for physical health as well as counseling services.

The health center is part of a “Facilities Master Plan” which also includes residential housing updates. The acknowledged lack of space on Quinnipiac’s campuses for expansion and larger facilities drew a laugh from the senate. Faculty Senate member and Chair of the Department of Journalism Margarita Diaz cited the new facilities plan as one of her top priorities.

“I know that we all want to see a clear facilities plan that provides additional space for classrooms and faculty offices, as well as a commitment to allocating the necessary resources to deliver on Quinnipiac’s promise,” Diaz stated in an email.

Faculty Senate Chair Charlotte Hammond described the lack of classroom spaces as “the elephant that continues to be in the room.” She suggested that donors eager to fund Quinnipiac’s future in a tangible way should contribute money to increasing classroom spaces.

“You said donors like to have ‘something,’” Hammond said, “I think their ‘something’ should be a gigantic extra building here on the Mount Carmel campus.”

The final goal is to foster lifelong success and communities, which means extending and improving connections with alumni. This will also involve creating a networking program that engages the university with network partners.

“Alumni who are well-connected to the institution can provide quite a lot of benefit in recruiting students, retaining students, educating students, providing them internship opportunities, job opportunities,” Thompson said. “And we in turn, receiving that benefit should be committed to some provision of helping them with their lifelong learning needs.”

The success of the plan will be measured through student retention, employment, diversity and philanthropy.

Ultimately, the plan hopes to solidify a “Q Promise for the Future.” As a “University for the Future,” Quinnipiac will become more adequately prepared to prepare graduates for a life after college by partnering with employers and individuals to help graduates transition into a successful professional career.

Funding the future of Quinnipiac will come at a price, but this is something Olian has considered when crafting her plan.

“We’re taking a holistic look at the budget for the first time in a long time in terms of what makes sense for us to continue investing in and whether or not it connects to our vision of the future,” Thompson said.

Quinnipiac’s radio station, AM-1220 WQUN did not connect to this vision, and thus is scheduled to close in June 2019. The radio station was closed due to decline in student interest in the industry, according to Vice President of Public Affairs, Lynn Bushnell.

After viewing the first draft of the plan, Diaz believes the plan has promise.

“I am encouraged by the prominence of diversity in this early draft and look forward to working with the administration to produce a blueprint that we can all get behind,” Diaz stated.

Olian will be presenting the plan to the student body on Monday, Feb. 4 at 5 p.m. in Buckman Theater, but Jeremy Gustafson, a freshman political science major, already has some ideas.

“It is time for the university to look for solutions for crowded classrooms, an insufficient number of faculty and a more diverse university,” Gustafson stated in an email. “I am hoping that President Olian’s strategic plan touches upon all of these issues and provides a creative long-term agenda to fix these problems.”