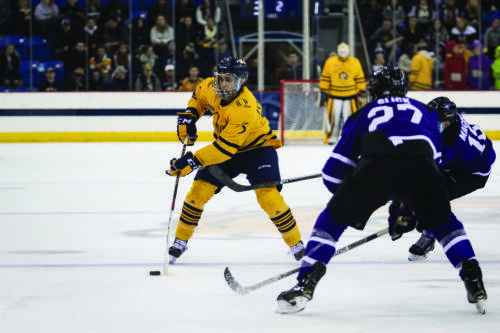 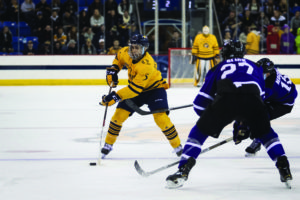 [/media-credit]If you looked at the ECAC Hockey standings at any point this year, the Quinnipiac men’s ice hockey team was almost always at the top.

But there’s no need to panic. It was expected that Quinnipiac, who is nationally ranked at No. 5, would drop a bit in the standings after having this past weekend off. Not only that, but Quinnipiac has not played a conference game since Jan. 12 when it lost to Harvard 2-1.

“We’ll figure it out, where we are is where we are,” Quinnipiac head coach Rand Pecknold said after the team’s last game against Holy Cross on Jan. 22. “We’ve got to get better and make a good run. We have enough games here and we just have to keep getting better at some things.”

While Quinnipiac boosted its overall record with wins against Boston University and Holy Cross to finish out January, everyone else in ECAC Hockey was playing catch up. Now, Quinnipiac has about the same amount of games remaining with 10 entering the final five weeks of play.

“I think we’re all in pretty good spirits,” junior forward Alex Whelan said in regards to the final games left on the schedule. “We’re all excited for this upcoming grind. We have a good opportunity here to do some special things.”

One of the biggest changes this team has had in the recent weeks is that it finally has a clear-cut No. 1 option in goal. Junior Andrew Shortridge has started the last five straight games, going 3-1-1 in that stretch. Ever since the Colgate game on Jan. 4 when Shortridge relieved sophomore Keith Petruzzelli in net, no other goalie has touched the ice.

“I feel good,” Shortridge said. “I feel as a team we’re really gelling. Personally, I feel I’m doing pretty well to do my job. Stop the puck, give the guys some confidence to do their jobs. Overall as a team, I feel like we’re really hitting our stride here.”

It was big tell-tale sign from Pecknold when he decided to go with Shortridge against Boston University and especially against Holy Cross. With those two matchups wrapping up the non-conference schedule for the Bobcats, it was a little shocking to see Petruzzelli not get a nod in either of those games.

The other big factor has been the re-emergence of senior defenseman Brandon Fortunato. After putting up 10 points in the first six games, Fortunato cooled off. Fortunato went a stretch of 12 games, registering only five points.

“I was just trying to stay positive,” Fortunato said of his cold spell. “I was trying keep doing what I had been doing all the first half before that cold streak. Guys have been great, pushing me everyday to keep getting better. They’re all in my corner, just trying to get better everyday.”

But 2019 has treated the Boston University transfer well. Since the turn of the year, he has nine points in six games, including a three-point night against his former team where he scored the game-winning goal with two seconds left. He currently rides a four-game point streak heading into February.

“I feel like I’ve just been trying to shoot more and just be more aggressive with the puck and attack open areas,” Fortunato said. “So far it’s been paying off so I just have got to keep it up.”

Those two players will be vital in the team’s run at an ECAC Hockey championship and more – but that road is not an easy path to travel on.

Looking at the standings, Cornell and Yale are tied at the top with 17 points. Quinnipiac is 1-0-1 against Cornell, having beaten them in November, then tying them earlier this month. Quinnipiac has yet to play its rival, Yale. That presents four huge points in the standings that each team certainly can benefit from.

The same situation with Yale presents itself with Clarkson. Clarkson is tied for third with Harvard at 16 points. It’s another team that Quinnipiac has yet to match up with this year, so that’s another two big games that lie ahead for the Bobcats.

Quinnipiac and its 15 points are tied with Dartmouth for the fifth seed. Each team has exchanged 5-1 victories over each other, with the home team prevailing in each.

“It’s a little bit of a mess,” associate head coach Bill Riga said. “Just how close it is, you win one game, you’re in first, you know, it’s a little bit crazy. So it’s best to just not to focus on it and just focus to what’s next and look at it after each game and see where we’re at and see what it means.”

In addition to the four games against Yale and Clarkson, Quinnipiac has two games apiece against Brown and St. Lawrence. Brown sits right behind Quinnipiac with 13 points.

Take an even deeper look at Yale and Clarkson, the top two opponents Quinnipiac has left to play, and they are not unbeatable by any means. Yale’s ECAC Hockey losses have been to Dartmouth, Cornell, Clarkson and Union, all teams in the upper-to-middle part of the standings. Yet, the Bulldogs lost to Maine and UConn, two teams Quinnipiac handled fairly easily.

The same can be said of Clarkson. Its losses have been to Union, Harvard, Yale and St. Lawrence. Mostly all formidable opponents except for the fact that St. Lawrence has one conference win – the win against Clarkson.

But, again, Quinnipiac has followed the same pattern. Four conference losses to Union, Dartmouth, Harvard and Colgate. Colgate’s a team Quinnipiac had beaten easily twice, however, one that did not count for conference. That is until Jan. 4 when it blew a 3-0 lead in Hamden and lost 5-4 in overtime to a Colgate team with three conference wins.

The fact of the matter is it’s crunch time for this team. The final month and beyond will not only say a lot to the build of this team, but can seriously impact where Quinnipiac finishes in the standings as No. 1 – No. 7 are only separated by four points.

With all of these two-game weekends upcoming, there is going to be a lot of shifting up and down the ECAC Hockey standings. And teams are going to see what a difference a loss here or a win there will make.

But when summing out the mentality of the team down this final stretch, Riga put it perfectly.

“It’s just a series of one-game segments that we need to play the rest of the year. Points are at a  premium, any point that you can get at this point is going to help. You see how close it is. We’re just focused on going out there every night and getting points.”