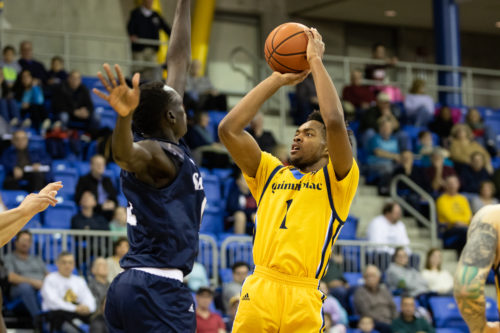 Head coach Baker Dunleavy was impressed with his team’s energy and consistency throughout the matchup.

“I thought this was a pretty complete game for us,” Dunleavy said. “As a coach you’ll find things to nitpick about, but as complete of an effort as we’ve had.” 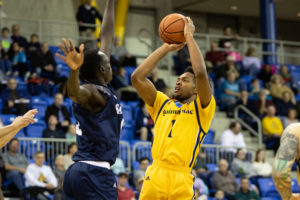 [/media-credit]The Bobcats struggled finding a rhythm early in the first half  as Saint Peter’s was able to match each basket with Quinnipiac and trailed 17-16. However, graduate student Cameron Young was able to provide that spark as he reached the 1,000-point mark.

Young is the 41st Bobcat in program history to reach the milestone and it didn’t seem to affect him as he finished the day with 28 points.

“I knew this was the game I’d probably get it, but I tried to keep it in the back of my mind,” Young said. “I’ve been through a lot at this school the past two years, and I was able to seize my opportunity.”

Despite it being his second season as Quinnipiac’s head coach, Dunleavy has grown to appreciate the things Young provides for his team.

“It’s incredible what he’s done, he started pretty aggressively and capably on offense last season,” Dunleavy said. “He’s a talented offensive player, the things I’m so proud of are his increased defensive effort and passing the ball through a crowd. Those are things he’s developed and it’s taken a lot of hard work, but he’s put it in and I’m really impressed.”

The Bobcats took that energy into the second half as more players were able to get involved such as sophomores forward Jacob Rigoni and guard Rich Kelly.

Kelly was able to record a team leading six assists. Rigoni made his mark by finishing the game with 16 points and shooting 60 percent from three. Despite his early season struggles, Rigoni’s preparation was something that never changed.

“I’m just confident in the reps I put in and focusing on your technique,” Rigoni said. “When you’re having trouble, just getting back to the basics and having guys believe in me whether I’m making shots or not.”

The Bobcats will look to win three straight MAAC matchups as they travel to face Canisius on Friday, Feb. 1 at 7 p.m.