Shut down, but not sleeping

I don’t always go to D.C., but when I do, the government is shut down, there’s a historic snow storm, which shuts the government down even more, a terror plot targeting the White House is foiled by the FBI and one of my classmates is robbed at gunpoint.

In other words, the week was relatively uneventful. 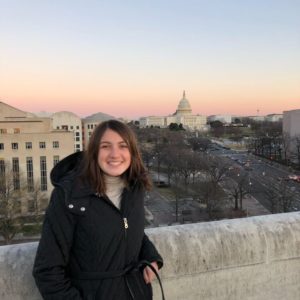 [/media-credit]My two week expedition to D.C. for a Quinnipiac political science class called Inside Washington was my first experience in the nation’s capital. My expectations of the city were startlingly deviant from reality.

For someone who has lived my entire life in the serene countryside of a small town in Connecticut, Washington has always been Hallie Jackson’s face on NBC framed by the White House lawn from the press tent. When she talks about Trump’s tweets with a stern, but slightly judgemental tone, all I can think about is how I’d give anything to be just like her.

What I didn’t realize is that Hallie Jackson isn’t the only one sitting in front of the White House in a tent. There’s also a couple of men with shaggy beards singing Christmas carols and selling jewelry outside the fence. Furthermore, there are dogs stationed on the front lawn that will charge and flatten anyone who tries to trespass.

My ignorance about the city also extended to the climate. To me, any state south of New Jersey is tropical. That’s why I packed black leather boots with a heel, flats and running sneakers, but left the waterproof hiking boots in Connecticut.

In a storm that racked up the highest snowfall totals in the area since the blizzard of 2016, I decided I couldn’t sit around and watch history through my second-story window. I had to experience it first-hand, despite my footwear dilemma.

In the midst of the windswept snow, I ventured out to the capitol building wearing mesh running sneakers with Walmart bags tied to my feet. As I’m sure you can imagine, I was already feeling like the young professional I aspired to be.

My naivety worsened. The government shutdown foiled my fantasies of touring museums like the Smithsonian. Luckily, I was able to keep myself entertained by stalking Bernie Sanders at the dry-cleaners’ and taking selfies outside of Alexandria Ocasio-Cortez’s closed office door.

My visions of traipsing around the city-sidewalks, buying Supreme Court snowglobes and nerdy t-shirts were clouded by a notification that two students, one of which was from Quinnipiac, were robbed at gunpoint just a block away from my residence hall.

I planned to stay inside from then on, and claim it was because the Walmart bags didn’t keep the snow out. While this was partly true, in reality, I was scared, and my innocence and wonder began to evaporate even faster than the snow.

But the next day, I had recovered. I put my soggy, snow-soaked sneakers in the dryer, zipped my wallet inside my inner coat pocket and walked D.C.’s sidewalks with a purpose.

I had envisioned D.C. as a place where I, Emily DiSalvo, could rub elbows with my heroes, get discovered as a journalist and immediately hired by Politico. I eventually came to the conclusion that D.C. isn’t a dream. When it comes down to it, Washington D.C. is just another city.

The only difference is that one pigheaded man can shut the whole joint down if he wants.

Despite these realizations, my love for the city didn’t waver. In fact, it grew stronger with the knowledge that D.C., like me, isn’t perfect. It’s both white marble buildings and ramshackle tents under metro passes. It’s both snappy three-piece suits, and the rumpled collared shirt you’re wearing for the third day because you haven’t had time to do laundry. It has the potential to be both bustling with productivity and closed down due to internal turmoil.

And if I’m lucky, and don’t give up on D.C–accept it for its flaws and love it anyway–one day, I could be just like her.