Quinnipiac men’s basketball moves down to .500 in MAAC play with 75-72 loss to Niagara 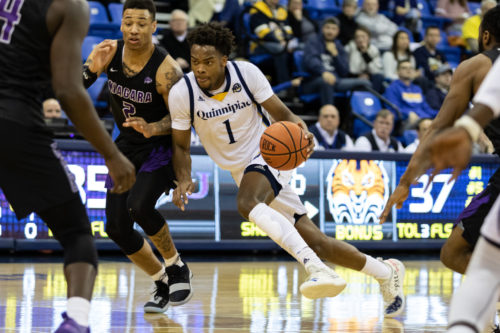 The Quinnipiac men’s basketball team dropped its second close game in a row, as 3-pointers by graduate student guard Cam Young and sophomore guard Rich Kelly came up short in a 75-72 loss to Niagara at the People’s United Center on Saturday.

The Bobcats (8-9, 3-3 MAAC) had their chances to tie this one, as Niagara missed six consecutive free throws in the final minute, but were unable to capitalize. 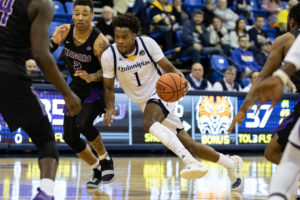 [/media-credit]“Disappointing finish for us,” Quinnipiac head coach Baker Dunleavy said. “Obviously our guys battled at the end and gave ourselves a chance but I think we’re going to have to put together better defensive efforts to have a chance to win more games in this league.”

“[We need] to get more stops,” Dunleavy said. “Being able to key in on the opposing team’s personnel, obviously with [Niagara senior forward Marvin Prochet] being as good as a player as he is keying on him and not letting a guy like that get hot. It’s difficult to do but we’ve got to take that challenge on and do a better job.”

Prochet shot 9-for-11 from the field, which included a 6-for-6 start, and scored 15 of his 24 points in the second half. He keyed an early second half push that put the Purple Eagles ahead.

Dunleavy adjusted, switching his team’s defense to a 2-3 zone, but the Bobcats still struggled to get stops down the stretch as Niagara stunted multiple Bobcat runs with 3-pointers throughout the half.

“[The zone] was just to give them a different look and try take them out of rhythm the best we could,” Dunleavy said.

Quinnipiac made a late push on some big shots by Kelly and Young, who led the team in scoring.

Kelly finished with 20 points and eight assists, while Young led the Bobcats with 24 points and seven rebounds.

“Rich is playing great basketball,” Dunleavy said. “I think a lot of guys, Cameron Young, really put up good numbers and was efficient offensively. Our team had 16 assists to 10 turnovers.

“In my opinion we [well] played enough offensively to win the game, the low hanging fruit here is defensively.”

The Bobcats had four starters in double-figures as Tyrese Williams (11 points) and Abdulai Bundu (10 points, eight rebounds) both played key roles on offense. With the eight boards Bundu became just the fourth Bobcat in Division I program history to have 600 career points and 600 career rebounds.

“[Bundu] is very consistent in what he’s been doing,” Dunleavy said. “We’re really lucky to have him. I think his foul trouble hurt us, he had to come out of the game for a stretch and we couldn’t start him in the second half.”

A key for the Bobcats going forward will be to get more production out of their bench as senior guard Aaron Robinson, junior guard Travis Atson and freshman guard Tyree Pickron combined to shoot 0-for-12 off the bench.

“We have good shooters coming off our bench,” Dunleavy said. “We’ve just got to keep them confident and keep them aggressive. In a game where bench goes 0-for-12 your not going to have 90 points but we did have enough points to win the game if we defend. That’s where we’ve got to get better.”

The Bobcats will be on the road next time out as they will travel to Marist to take on the Red Foxes next Friday at 7 p.m.