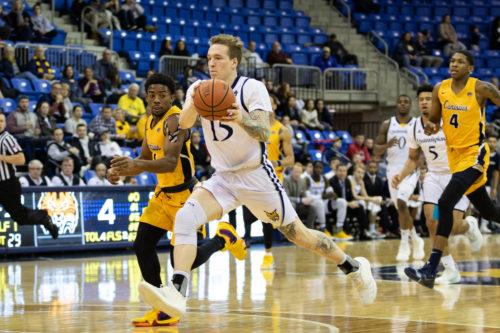 The Quinnipiac men’s basketball team was unable to pull out victorious in a close one, as graduate student guard Cam Young’s 3-pointer bounced out at the buzzer, sealing a 65-63 loss to Canisius.

Tied at 63 with 44.6 seconds remaining, the Bobcats turned the ball over, which led to a layup by sophomore forward Takal Molson with 5.6 seconds left to seal the win for the Golden Griffins (6-11, 3-2 MAAC). 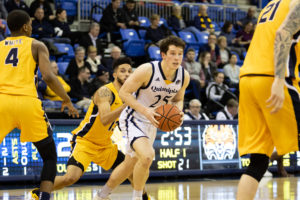 [/media-credit]“It really comes down to every single possession,” sophomore guard Rich Kelly said. “Whether it’s a box out, a back pivot jump stop and being solid, one play, like at the end, you can lose the game on.”

Quinnipiac got multiple big shots down the stretch, as a 3-pointer by senior guard Aaron Robinson gave the Bobcats a 58-57 lead with 2:33 to play.

Senior forward Abdulai Bundu followed with an and-one layup to put the Bobcats ahead 63-61, but they were unable to hold the lead.

“He’s done great,” Quinnipiac head coach Baker Dunleavy said of Bundu, who had a game-high 13 rebounds. “He’s done the same things he gave for us last year. He’s really consistent in his effort and it’s one of the strengths of our team when you lose starting five-man (junior forward Kevin Marfo) and you have another guy coming in to do what [Bundu] can do is very special.”

The Bobcats were able to contain Metro Atlantic Athletic Conference (MAAC) Preseason Player of the Year Isaiah Reese to just 11 points, but he picked up nine assists and the game-tying bucket to help the Golden Griffins pick up their third conference win.

“We certainly emphasized him,” Dunleavy said of Reese. “He’s a really good player. He only had 11 points but nine assists to two turnovers can help you win a game. I think that’s a credit to him.”

Molson, the reigning MAAC Rookie of the Year, finished with a team-high 18 points for the Golden Griffins on a blistering 8-for-10 shooting.

“[Molson] is just a physical player who gets a lot done near the basket,” Dunleavy said.

The Bobcats struggled out of the gate in this one falling behind 9-2 and shot just 37.9 percent from the field for the game.

“Usually I try to drive and find other guys and today they were denying a lot of the shooters,” Kelly said.

Dunleavy said they didn’t necessarily play well, but that they kept themselves in the game to win, which shows his team’s character.

The Bobcats will stay at home on Saturday as they take on Niagara at 2 p.m. at the People’s United Center.