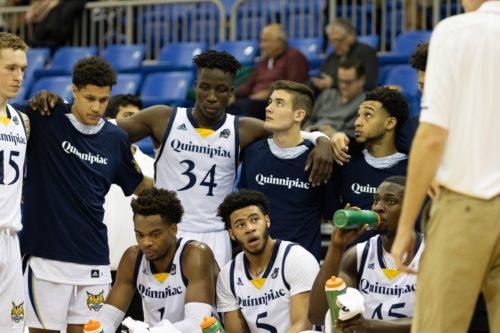 Ready or not, 2019 is here. The new year can be an opportunity for a fresh start or to make major changes in your life.

The Quinnipiac men’s basketball team wrapped up its non-conference slate on Dec. 22 with a 76-73 home loss to Stony Brook. Overall, the Bobcats finished 5-6, an improvement from the 3-9 record they finished with during the 2017-18 non-conference season. Despite the better record, there are still plenty of areas Quinnipiac can improve in the new year. 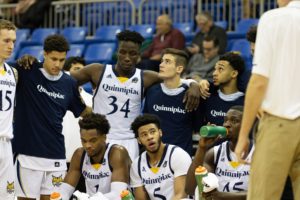 [/media-credit]With that, let’s establish some New Year’s resolutions for the team.

Baker Dunleavy: Live up to the preseason expectations

In the MAAC Preseason Coaches’ Poll, the Bobcats were voted to finish tied for third in the conference. Expectations were high for the second-year head coach after the Bobcats overachieved last season (finished 6th after being picked last [11th]).

After an up-and-down start to the season where the Bobcats lost two games, then won two, lost two, won two, then lost, won and lost, Quinnipiac is going to need to find consistency.

Luckily for the Bobcats, the entire MAAC struggled during the non-conference portion of the schedule. Niagara (7-6) was the only team to finish above .500, while Quinnipiac had the second best winning percentage (.455). The two teams picked above Quinnipiac in the Preseason Poll – Rider (5-7) and Canisius (3-8) – experienced some similar growing pains early in the season.

After a date with lowly Manhattan (2-10) on Jan. 3, the Bobcats will play defending MAAC regular season champion and preseason favorite Rider on the road on Jan. 5. That game will tell a lot about what to expect for the rest of the season.

The area that Young should look to improve? Efficiency.

Last season, Young shot 42.2 percent from the field and 30.3 percent from 3-point range. Through 11 games this year, he’s down to 40.5 percent overall, but up to 37.7 percent from deep. The 3-point percentage is right around where it needs to be, but the overall shooting number should be higher. Most of Young’s attempts are contested shots around the rim, and that’s where he has to improve.

Looking at the last stretch of games, Young is already trending in the right direction. In the first six games of the year, Young didn’t shoot above 40 percent from the field in any game (28-for-83 overall, 33.7 percent). But in the last five games, he’s been over 40 percent in each contest (34-for-70 overall, 48.6 percent). Young needs to stay on that positive, more efficient track as conference play begins.

The sophomore point guard was selected to the Preseason All-MAAC Third-Team, but an MCL sprain suffered in late October held Kelly out of the first five games of the season.

In his first game back (a loss at Stony Brook), Kelly had six assists, the most any Bobcat had recorded in a game at that point in the season. Quinnipiac is 3-3 since Kelly returned, but his scoring averaging is down from last season (11.1 PPG to 9.2).

In the new year, Kelly needs to remain healthy and regain the magic that he flashed last season (40 points at Fairfield on Feb. 17, five games with eight or more assists).

In only carrying two true big men, Dunleavy took a risk with this roster. So far, it’s paying off (as long as they stay healthy).

Marfo, a junior in his first year as a Bobcat after transferring from George Washington, is averaging a team-leading 9.3 rebounds per game (RPG) – good for second in the MAAC. On a team with so few big men, Marfo’s contributions have been invaluable. His continued dominance on the glass will be vital heading into MAAC play.

Bundu, a senior leader for this team, has come in off the bench all season and filled his role. Bundu grabbed at least five rebounds in each of the three games where he played over 20 minutes.

If these two stay healthy and available, the Bobcats should have no trouble controlling the glass all winter long (Quinnipiac is currently third in the MAAC team rebounding at 35.5 per game).

Williams, a freshman, Rigoni, a sophomore, Atson, a junior, and Robinson, a senior, are all key role players on this team. On any given night, their roles can change. In MAAC play, these guys will have to be ready for any and every role thrown at them.

Williams, a traditional off-guard, was forced into the lead ball handling role when Kelly was out. He has started all 11 games this season, even as Kelly has returned. In playing outside his comfort zone, Williams has discovered more layers to his game. The fourth leading scorer on the team at 8.6 PPG, Williams also averages 4.5 RPG and 2.4 APG.

Rigoni has regressed slightly in his second season. A 3-point specialist, he’s shooting 38.2 percent from deep this season, down from 45.5 percent last year. In his last three games, though, he’s shooting 60 percent from long distance (12-for-20). Perhaps he’s getting hot at the right time.

In his first year as a Bobcat, Atson (a transfer from Tulsa) has been solid. Since moving to the bench when Kelly returned, Atson is averaging 8.6 PPG. He’s been just as solid as a reserve as he was when he started. That’s exactly what the Bobcats need, and Atson could be a huge piece off the bench the rest of the way.

Lastly, perhaps no one on the team has improved more this season than Robinson. After primarily serving as a 3-and-D player last season (one who is a catch-and-shoot player who plays strong defense but doesn’t create for himself or others much), Robinson expanded his game this fall. He was the primary ball handler off the bench behind Williams and now he is another versatile weapon going forward.

The way that each of these four players handle their roles going into MAAC play could be a huge determining factor down the stretch. Young and Kelly will be the main focuses of the team, but the way these role players perform will make the difference between winning and losing.

While the “New Year’s” concept is generally commercial, the Bobcats can use it as a way to keep searching for the best version of themselves