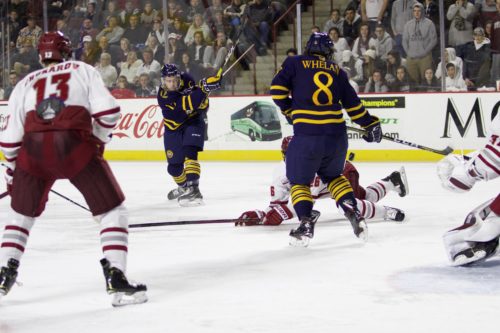 A peculiar location for a college hockey game, Nassau Coliseum, was the home to a Saturday night full of milestones and accomplishments as the Quinnipiac Bobcats (15-3, 6-2 ECAC) dominated the Colgate Raiders (4-10-2, 1-3-2 ECAC) in a 6-0 win. 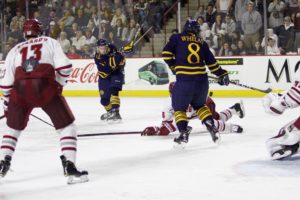 [/media-credit]“It would have been nice to get it at UMass that night, but I’m happy with the year we’ve had so far,” Pecknold said. “We still got some work to do here. I thought tonight was a really good team effort.

The game started out a little slow but picked up the pace as the first period went on. Quinnipiac started to control the game with offensive possession and constant forechecking. Eventually, the offensive pressure created a grand opportunity for DiLiberatore as he strolled in from the point and fired the puck past Colgate’s freshman goaltender Andrew Farrier.

“I was really excited [for DiLiberatore]. I told him before the game if he hit the net it was going in,” Priskie said.

Freshman forward Ethan de Jong added to the lead after forcing a turnover in the neutral zone and casually flick the puck top-shelf on a breakaway for his fourth goal of the season.

The second period was much slower than the first and lacked a ton of action, but Quinnipiac’s Karlis Cukste finished off a terrific shift for the Bobcats by firing a puck from the point through a multi-player screen into the back of the net. This also happened to be his first of the season.

“It’s what we always do. It’s just good habits and it was going to go in eventually, for both of them,” Pecknold said.

Colgate gained some momentum back with a couple of really strong shifts but ultimately it was not enough to keep them in the game during the third period.

Within two minutes of the period starting, Priskie forced a turnover on the forecheck and made a perfect cross-crease pass to freshman forward Michael Lombardi, who shoveled the puck into the net, extending Quinnipiac’s lead to 4-0.

Just about mid-way into the third, Burgart found the back of the net after a loose puck rebound dropped in front of him. His first career goal also happened to be Priskie’s 100th career point.

“I made sure Desi got [the puck], you never forget your first one,” Priskie said. “He’s been doing the right things the whole first half and he wasn’t able to put one in and today it just kind of fell in front of him. I was just so happy he got his first one and hopefully the floodgates open and we see many more of Desi scoring.”

Junior forward Alex Whelan wanted in on the scoring as he one-timed senior forward Craig Martin’s pass into the net giving Quinnipiac an insurmountable 6-to-nothing lead.

Junior goaltender Andrew Shortridge combined with sophomore goaltender Josh Mayanja, who came in with five minutes remaining to get some playing time, for the team’s seventh shutout on the season.

This was one of Quinnipiac’s most dominating win of the season, which seemed fit for Pecknold earning his 500th.

Quinnipiac’s next game will be back in Hamden after the new year, as it faces off against Colgate again on Friday, January 4th.