Quinnipiac men’s basketball moves to .500 with win over Lafayette 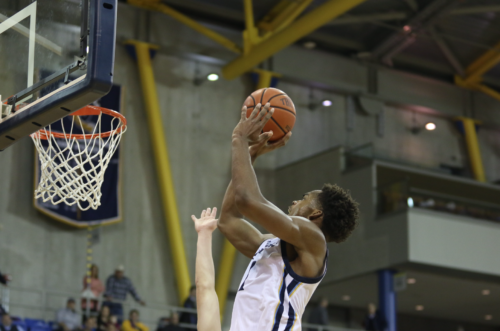 The Quinnipiac men’s basketball team cruised to an 88-77 victory over Lafayette (2-7) on Saturday at the People’s United Center in Hamden to get back to .500 on the young 2018-19 season.

The Bobcats (4-4) started the game hot from beyond the arc, hitting eight of their first 13 attempts from 3-point range and 10 total in the first half to send them into the break up 15.

“We’ve really been talking a lot about how we start,” Quinnipiac head coach Baker Dunleavy said. “A lot of the start was making shots, but we defended, we forced turnovers and offensively we able to get each other good shots.”

Earlier this week, senior forward Abdulai Bundu talked about the team’s slow starts being attributed to their slow starts in practice, but the Bobcats flipped the script in this one, leading Lafayette for over 35 minutes. 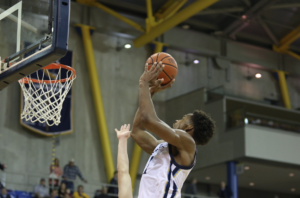 [/media-credit]“[Starting games] is something that we’ve been focusing on in practice as of late,” graduate student guard Cam Young said. “Just trying to get it going early. We try to start it in practice with how we start practice and try to continue [that].”

Young led the way for the Bobcats with 28 points, 20 of which came in the first half where he shot 7-for-12 from the field and 3-for-6 from beyond the arc.

“My teammates draw a lot of attention on drives,” Young said. “They just find me on the kicks and I was able to knock them down.”

Freshman guard Tyrese Williams also had a big game which included 4-of-5 shooting from 3-point range in the first half. Williams finished with 16 points, four rebounds and a team-high seven assists.

With sophomore guard Rich Kelly back in the starting lineup, Dunleavy believes it has opened up more opportunities for the whole team, citing that his greatest attribute is that he makes people around him better. 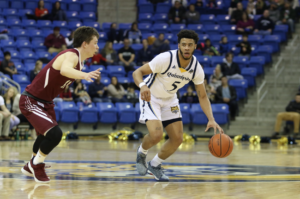 “It feels great,” Williams said of getting to play off the ball more with Kelly back. “These guys they look for me to kick and drive and just our offense, drive, jump stop, kick and whoever’s open knocks down a shot.”

The Bobcats got contributions all around, with six players scoring 10 or more points including two off the bench in Travis Atson (10 points) and Aaron Robinson (10 points).

“I would say that [our bench] has been a strength for us in general,” Dunleavy said. “You take the Maine game at home, those guys off the bench bringing energy [was important]. I think adjusting and getting [Atson] coming off the bench has been really helpful.

“I’ve been proud of our bench, Robinson, Bundu, Atson, Pickron, all those guys are extremely valuable. If you’re going to talk about 40 minutes, it’s not just the starters it’s everybody who comes in there.”

Quinnipiac led by double-figures for the entire second half, but there are still things Dunleavy feels they need to work on to improve as the season progresses.

“We’re a work in progress in every way, especially on the defensive end,” Dunleavy said. “I’m proud of our progress but I’m telling our guys that we’re not close to what we want to be.”

The Bobcats will take on Drexel on Sunday Dec. 16 at 6 p.m. at Mohegan Sun Arena as they look to get themselves over .500 in non-conference play.