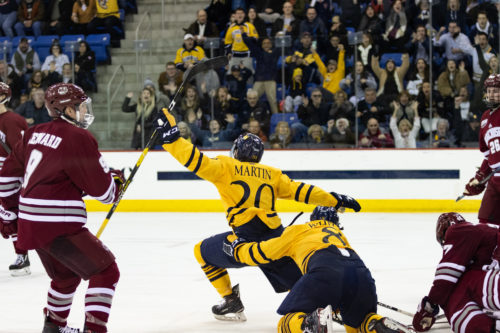 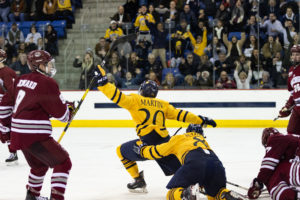 [/media-credit]Quinnipiac head coach Rand Pecknold spoke about his team’s play after the game.

“The atmosphere was phenomenal and our fans were great,” Pecknold said. “We weren’t perfect but we were really good. I thought Shortridge was the best player on the ice. We got some timely goals and I thought our compete was great.”

Just 42 seconds into the game, a rocking Quinnipiac crowd became even more electric when freshman forward Wyatt Bongiovanni took advantage of a juicy rebound to score his seventh goal of the year and the eventual game-winner. Later on in the second period, freshman defenseman Zach Metsa tallied his second of the season to double the Bobcats’ lead.

Junior forward Craig Martin also scored two goals in third, including an empty-netter that solidified the team’s win over the top-ranked team in the country. Martin now has four goals in his last two games, but his value on the team comes from more than just goal production.

“[Martin] is a 200-foot player and we’re really happy with how he’s played, not just tonight, but the whole season,” Pecknold said.

Pecknold discussed Shortridge’s improvement from a season ago to this year, where he has a perfect 6-0-0 record, 0.83 GAA and a .966 save percentage.

“I think he’s been calmer in net and it’s just a natural maturation process,” Pecknold said. “He’s reading the play better and I thought tonight he was ahead of the play a lot.”

“[Shorty] was phenomenal tonight,” Priskie said. “He had our backs when we needed him to and he came up with some really big saves. That’s what we need from our goalies sometimes. We need them to be there to bail us out and he’s been a rock for us all season.”

Priskie mentioned after the game that the fans reminded him of the 2015-16 season, when the Bobcats made it all the way to the national championship game. He talked about the importance of that atmosphere in providing energy to the team.

The Bobcats can expect a similar atmosphere from the UMass crowd in tomorrow night’s rematch at 7:30 p.m. at the Mullins Center in Amherst, Massachusetts, when they try to complete the sweep against the No. 1 team in the nation.