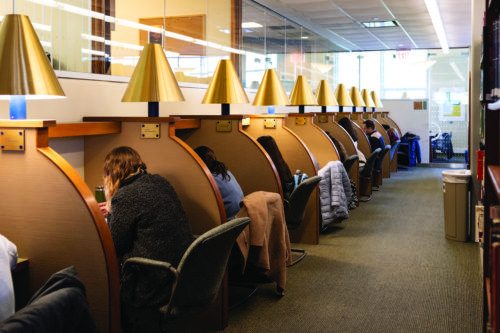 “There are peak times during finals week and midterms week where we are reaching 90 percent capacity,” Joven said. “Not every seat is occupied, however it is very crowded.”

Joven acknowledged that a crowded environment is not ideal for effective studying, especially because of increased noise levels.

“When there is overcrowding, noise level tends to be an issue,” Joven said. “We only have two floors so the noise level is contained. There’s not a whole lot of quiet room when there’s a lot of people on both floors.”

“A lot of people” means a significant increase from the amount of people that populate the library during non-finals weeks. According to Joven, on a typical week, capacity is at about 50 to 60 percent. During finals week, almost all of the 600 seats available in the library are taken.

Additionally, the number of available private study rooms is severely compromised during finals. Since the library only has 14 private study rooms, these become quickly reserved during a week when many students have to meet as a group to work on final projects. As a result, library staff plans to a post list of alternative study locations on their website to accommodate the demand.

“If you can’t find a quiet place here there might be alternative locations,” Joven said. “I looked at every square foot of this library to see if there are any rooms that we can make available for study purposes but we just can’t find any additional spaces from our existing floor plan.”

Joven and ABL librarians such as Sandy O’Hare are hopeful that the upcoming release of the University-wide Strategic Plan in January will include plans that will increase space in the library.

“What we’re hearing is that they are trying to touch everything on campus and include everything in this strategic plan so we are hoping,” said O’Hare who is the head of access and document services librarian.

In the past, ABL made changes to alleviate crowding by removing shelves of print materials to make room for more study areas. This strategy will not work going forward because the library’s stock print materials such as paperback and hardcover books is at its bare minimum says Joven.

“In the past couple of years we have been constantly looking at our print collection to see if we could remove any more,” Joven said. “Right now we are down to the bare minimum of our print collection. I don’t foresee removing a big chunk of what is left.”

In addition to potential changes resulting from the strategic plan, O’Hare says the library hopes to create small term fixes for the space problem by listening to feedback from students.

“We can’t knock down walls,” O’Hare said. “But if we could do tables as opposed to cubbies or something like that, something that is in our scope, we would be happy to pursue it if we could get feedback.”

The library has received feedback in the past from students via an extensive survey conducted on 2016. Many of the anonymous responses the library received in this survey complained about overcrowding.

“The library is always full during finals and the environment is not conducive,” stated a junior health science student in the 2016 survey. “People are having full volume conversations while seating, talking on the phone and all other manners of rude behavior. Last semester I resorted to driving to the North Haven library because it’s actually quiet there.”

O’Hare acknowledged that library crowding has actually gone down since the shuttles began taking students to North Haven.

“Since the shuttles started running over there we have not hit the numbers that we were hitting,” O’Hare said.

One way the ABL hopes to provide a more productive study environment is by offering ear plugs for students to use while studying if the noise levels become distracting. Additionally, Joven said librarians will be patrolling the library throughout the week to ensure noise is kept at a respectful level.

“We do periodic walk-arounds to make sure that our situation is not out of hand in terms of noise level and such,” Joven said. “We do what we can and for the most part we’ve never had major issue.”

Joven says while the library may be too crowded for some students next week, ABL’s online resources can be accessed anywhere. Additionally, librarians, like O’Hare will be responding to inquiries via a chat feature on the website.

“Librarians are important to maintain their presence in the library because there are now various complexities in accessing information,” Joven said. “It’s important that students come to the library to study, to collaborate, to work in groups but also the presence of librarians in their mix to help them navigate information highway.”