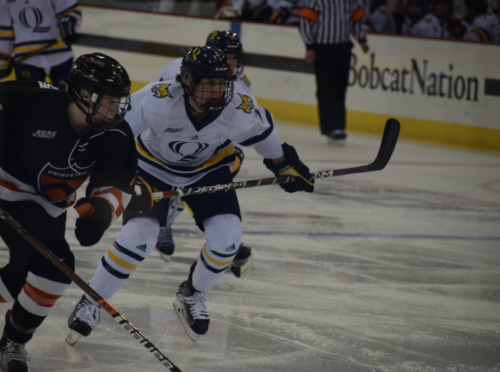 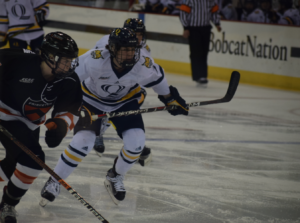 [/media-credit]In the second game of a home-and-home series, the Quinnipiac women’s ice hockey team was defeated by the Princeton Tigers Saturday afternoon at the Frank Perrotti, Jr. Arena, 4-1.

Quinnipiac head coach Cassandra Turner acknowledged the fact that the way Princeton played this afternoon is the reason why it is ranked the way it is.

“Princeton is definitely a good hockey team,” Turner said. “They deserve that undefeated status that they have in our conference. They were opportunistic when they had their chances and they put so much pressure on us today.”

Early into the first period, it was all Princeton. It was firing shots from anywhere it wanted, but these shots were saved by junior goalie Abbie Ives. There wasn’t much action until halfway into the first period. The Bobcats were on a powerplay and were able to take the first and only lead of the game from a goal from freshman goalie Zoe Boyd, notching her first goal of the season and propelling the Bobcats to a 1-0 lead.

Boyd described the moment of getting her first goal of the season and how the team was able to execute it.

“It was really a good feeling,” Boyd said. “Honestly I was just happy to put the puck in the net for the team and get the first goal there.”

It was actually Turner who called that this moment was going to happen for her freshman defensive man.

“Well we said before the game, ‘Zoe you’re going to get your first goal today’ and she did,” Turner said. “The play we drew up, she did it and I was excited for her.”

Minutes later, the Tigers came back with a goal of their own. This goal, coming from freshman forward Sarah Fillier, getting her second goal of the season and tying the game at one.

At the end of the period, Princeton was able to take the lead for the first time in the game, this time with a goal from senior forward Karlie Lund, getting her seventh goal of the season and putting the Tigers up 2-1 before the end of the first period.

At the end of the first period, it was Princeton with the shooting advantage, outshooting the Bobcats 14 to six.

At the end of the second period, it was Princeton who was again outshooting Quinnipiac, this time outshooting them 15 to eight.

The third period was more of a defensive battle, with each team not allowing many shots on goal. However, you did see Quinnipiac pushing the pace more than it did in the past two periods.

That would be credited to the fact that Turner, as she was starting to mix up the lines and see what she could do to create some momentum for her team.

“We mixed up the lines a little bit to get some different looks and I thought it created a little jump in the third period,” Turner said. “I think that’s what the team needed, you know to push ourselves and to make ourselves better.”

At the end of the third period, the Bobcats seemed to keep the shots limited, but was still outshot 10 to seven for the period and 39 to 21 for the whole game.

The Bobcats look to bounce back in their next game against the Union Dutchmen Friday, Dec. 7 at Messa Rink in Schenectady, New York.