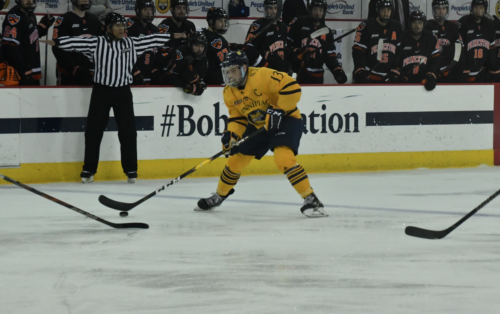 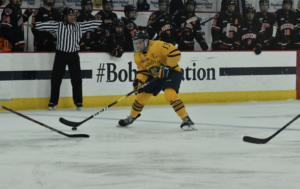 [/media-credit]A Friday night ECAC Hockey showdown between the Quinnipiac Bobcats (12-2, 5-2 ECAC Hockey) and the Princeton Tigers (3-5-1, 3-3-1 ECAC Hockey) at the Frank Perrotti Jr. Arena at People’s United Center was a hard-fought and physical game, with Quinnipiac coming out on top, 3-0.

Quinnipiac struggled to start the game with turnovers in its own end leading to a few high-percentage scoring opportunities for the Tigers. Quinnipiac junior goaltender Andrew Shortridge came out sharp to start the game and never lost a step, notching his second shutout of the season.

“Our goaltenders have been outstanding,” senior forward Scott Davidson said. “I think our defenseman have been really, really well too. Guys have great sticks in the (defensive) zone, defensively our forwards are playing well too.”

Not many chances sparked in the first period until Quinnipiac received its first power play of the game. With seven seconds remaining in the period, sophomore forward Odeen Tufto won the faceoff back to senior defenseman Chase Priskie, who sniped it top corner for his ninth goal on the season.

“When I got the puck, just kind of waited, trying to find a lane to the net,” Priskie said. “(Wyatt) Bongiovanni did a great job setting a net-front screen.”

The second period contained more action and physicality than the first, with both teams surging in the offensive end. Eventually, a Princeton neutral zone turnover led to Quinnipiac’s second goal on the night.

Freshman forward Michael Lombardi pick-pocketed Princeton and chipped the puck over to Scott Davidson, who proceeded to rifle a shot over the glove hand of sophomore goaltender Ryan Ferland, recording his first goal of the season.

The third period was much of the same as Quinnipiac continued to shut out Princeton’s offense. With just over a minute remaining in the game, Odeen Tufto slid the puck into the empty net after an unselfish pass from freshman forward Ethan de Jong, for his team-leading 10th goal of the season.

“I thought it was a great win, Princeton is a really good team,” head coach Rand Pecknold said. “We found a way to be good tonight, Shortridge was great, we got the win and got to try to reload to go to Princeton and play them down there tomorrow night.

Quinnipiac’s defense was the story of the game. They kept the offensive pressure to the outside, limiting scoring chances from the slot and tying up forwards trying to screen Shortridge or get to a rebound. The team went out and blocked shots the whole night to secure their fifth shutout of the season.

The Bobcats will travel down to Princeton this Saturday evening, for the second leg in the home-and-home matchup this weekend.