A taste of the nightlife 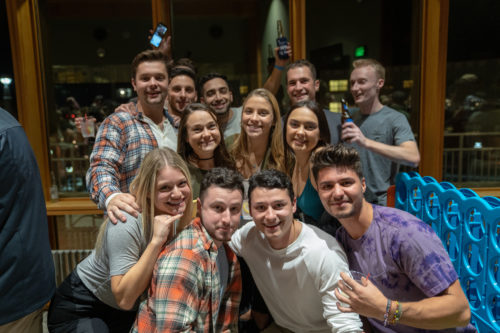 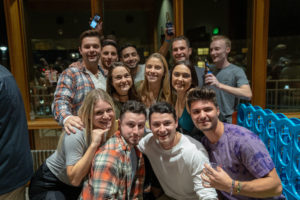 [/media-credit]The Rocky Top Student Center on the York Hill campus was flocked with students ready to party at the university’s first ever Pub Night on Thursday, Nov. 8.

The event took place from 9 p.m. to 12 a.m. and was organized by the Student Government Association (SGA), promoting its initiative to have a pub on campus.

Senior Class Vice President Allison Kuhn said that SGA was pleasantly surprised at the big turnout. There was a calculated total of 475 people who attended the event, but Kuhn understands that this caused overcrowding, which made some students disappointed at the long line to get inside the temporary pub.

Senior nursing major Brooke Hamilton was one of several students who endured the long line to get inside the pub.

“I think Pub Night was a great idea, but due to hitting the max capacity so early in the night, I had to wait in line for 40 minutes with a one-in-one-out system,” Hamilton said.

SGA members told students waiting outside the pub that they were free to wait until they’re able to enter and did not turn anyone away due to overcrowding, according to Kuhn.

“I don’t think everyone was completely satisfied due to capacity conflict, but to be fair we had no idea that the students would be as receptive,” Kuhn said. “The Fire Marshal gives us a number that we have to stick to. The number was 350 for our space.”

Pub Night was open to any undergraduate or graduate student 21 and older to enjoy a cash bar run by bartending service Two Pour Guys. Alcoholic drinks like liquor, wine and beer were priced between four to seven dollars, with non-alcoholic drinks available for free.

Platters of free food were offered as well that had mozzarella sticks, chicken wings and jalapeno poppers. On top of that, there was a variety of card games and other activities like a giant Connect Four and a carnival-esque basketball free throw station.

Senior biomedical marketing major Jeffrey Kim said that he had a great experience at Pub Night. 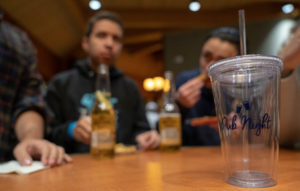 [/media-credit]“It definitely exceeded my expectations when I got there,” Kim said. “I was surprised that there was a lot of free food and Jenga and music. I think the school could definitely benefit from this. Boost morale, it just builds comradery between us and it’s just overall a lot of fun.”

Senior Class President Matt Corso said that SGA worked for two months straight to bring this plan to fruition, which included talking to many administrators of the school and just as many, if not more, strategic planning meetings.

“We worked with QU Dining and they supplied all of the food at the event and for that we are very thankful,” Corso said. “We are also very thankful to SPB who helped us out with the event.”

Corso sees having a pub on campus as a great tool to not only bring more life to York Hill, but to also strengthen connections within the academic community.

“It could bring alumni back on campus, and when there is a tight relationship with alumni, that usually helps schools out because alumni then turn into donors,” Corso said. “We have looked at other schools that have pubs on campus and feel that it is part of creating a community.”

Junior business marketing major Jake Glassheim also sees the benefits in having a pub as he says it can better protect the students.

“You don’t have to worry about drunk driving and people going out and doing other stuff like that. It kind of keeps everybody close together,” Glassheim said. “I look forward to hopefully having it more, and hopefully it becomes a staple of Quinnipiac on the York Hill campus.”

Kuhn said that there is more that SGA hopes to accomplish in the future involving this initiative. 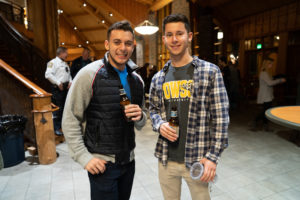 [/media-credit]Kuhn wants students to know that if they are interested in supporting this initiative of having an on-campus pub, that they can help by attending more events like these.

“We are really doing the best we can to build something really great and we really appreciate everyone’s support,” Kuhn said. “Student participation is what’s going to get this initiative passed, so we need everyone.”