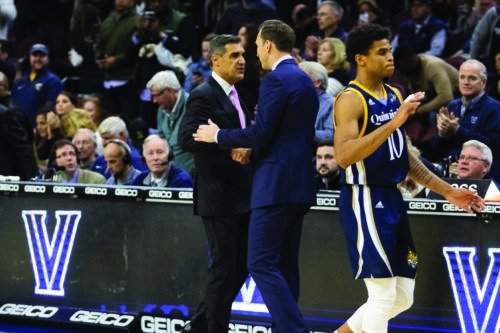 “For 40 minutes we’re going to compete and hate each other – just like any other game – but then after, we’ll come together and be family again.”

Quinnipiac head coach Baker Dunleavy and Villanova head coach Jay Wright are as close as any two opposing coaches could be. That’s what made Saturday night’s 86-53 Villanova win over Quinnipiac so odd. 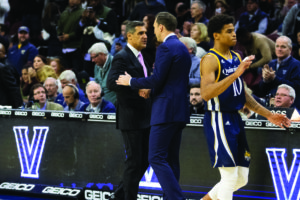 Now leading his own program in Hamden, Dunleavy is trying to emulate what Wright has built at Villanova.

“[Villanova] is a program whose culture and identity has been built over the last 20 years,” Dunleavy said. “We’re just kind of digging and building ours. [This game] was a great learning lesson for us.”

Quinnipiac was overmatched in the game – and rightfully so. The Wildcats – now ranked No. 8 in the nation – have won two of the past three national championships and made the NCAA Tournament in 13 of the past 14 years. The Bobcats went 12-21 last season and have never made an NCAA Tournament.

“Obviously, coming into this game – being that I’m from here and I went to school here – a lot of it was about me,” Dunleavy said reluctantly after the game. “But we really wanted to come in here and build confidence by playing this game. It’s hard to do that when you get jumped on early and that’s what happened.”

Villanova came out gunning, opening on a 26-5 run in the first 11:28 of the game. The Bobcats never really had a chance to get into a rhythm playing from so far behind all night.

While the game wasn’t particularly close, the similarities between the two teams were evident – especially to the coaches.

“[Playing each other] seemed like a good idea when we were talking about it, but then when it comes the week before, I’m watching film of them do exactly what we do,” Wright said. “I said to the team before the game ‘Whatever play we call, they know everything we do. It’s going to be tough to run specific plays.’”

Before the game, Dunleavy admitted that he still uses a lot of what Wright uses.

“There’s quite a few things I stole from Villanova, only because it’s not like I just worked for him for two years and borrowed his stuff,” Dunleavy said. “I grew up in that program, so a lot of it is ingrained within me.

“A lot of things that we deem to be our core values are the same things they do. The main thing is attitude. We talk about it a lot here about how we can only control what we can control and how we respond to adversity. Some bad things are going to happen to us within the course of a game, but by the next play can we get over that and move on? That’s probably the most valuable thing.”

So, each team knew what to expect out of its opposition. But the two old pals surely had a fun time facing off, right?

Well, not so much.

“I didn’t particularly enjoy [playing Dunleavy],” Wright said. “I was glad to get him back here. Tonight was Alumni Night and he’s really well-respected and loved by our alumni. I’m glad he was here for that.”

“It was fun to see all those guys, but not under these circumstances,” Dunleavy said. “This was a one-time thing. You play these games against really difficult opponents, and then you mix in the emotion of being home and being with family and it’s tough. We’ll do this one time and be done with it.

“Obviously this place means a lot to me and I think Quinnipiac will hopefully be better based on what I learned [at Villanova] and we can instill some of those values [at Quinnipiac].”

Even more strange than the coaches knowing each other so well was how Dunleavy knew nearly all of Villanova’s roster personally. As the lead assistant over the four years prior to last, Dunleavy was responsible for a lot of the recruiting for Wright.

“[Dunleavy] knows this team. He recruited a lot of them,” Wright said. “This was a real strange one because we really haven’t changed anything since he’s been here and he recruited so many of these guys.”

Redshirt seniors Phil Booth (23 points on Saturday) and Eric Paschall (11 points) were both products of Dunleavy’s recruiting. Now, Booth and Paschall are key figures on a Wildcat team poised to make a run at back-to-back titles.

While Villanova is essentially a guarantee to make it back to the NCAA Tournament and compete for a national championship, Quinnipiac just isn’t there. It makes sense, given that Quinnipiac is a mid-major program in a game traditionally dominated by teams from power-five conferences.

“I think as a team we just aren’t ready to compete on that stage yet,” Dunleavy said.

While Dunleavy and the Bobcats left Philly upset about the way they played, Quinnipiac made Wright a believer in its potential this season.

After the postgame press conferences in the halls of Wells Fargo Center, two great friends shared a moment and an embrace after a long night.

“I saw how you played on Tuesday [when Villanova beat another mid-major, Morgan State, but only by 23 points]. I knew this buzzsaw was coming,” Dunleavy told Wright.

“I knew you knew that,” Wright replied with a smile.

As anticipated, Dunleavy and Wright are back to being family after 40 minutes at war.