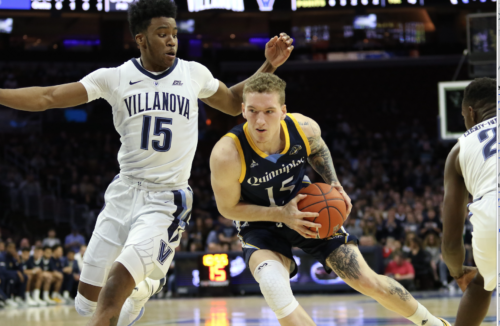 The Quinnipiac men’s basketball team struggled against the No. 9 ranked Villanova Wildcats, falling 86-53 at the Wells Fargo Center in Philadelphia on Saturday night.

Villanova (2-0) showed why it is the defending national champion in this one, dominating Quinnipiac (0-1) from the opening tip.

“[Villanova] is a program whose culture and identity has been built and dug in over the last 20 years,” Quinnipiac head coach Baker Dunleavy said. “We’re just beginning to dig in and build ours. Great learning lesson for us, I’m proud of our guys that we came in here and battled to the end, but obviously not the result we wanted.”

Quinnipiac opened the game 1-for-11 from the field, its lone field goal being a 3-pointer from freshman guard Tyrese Williams, as Villanova jumped out to a 16-3 lead.

First career bucket from @YungRese_4 comes on an NBA-range three.

Bobcats trail 9-3 at the first media timeout with 15:55 remaining in the first half. pic.twitter.com/1cLAo32a1F

“We really wanted to come in here and build confidence by playing this game,” Dunleavy said. “It is hard to do that when you get jumped on early and that’s what happened.”

Williams got the start in place of the injured sophomore guard Rich Kelly, but he struggled, picking up his fourth foul early in the second half and turning it over four times.

However, Dunleavy took some positives from his youngsters play, highlighting his six rebounds and aggressiveness on offense.

“We put him in about as difficult a situation as you could ask, on the road against a top-10 team as a freshman,” Dunleavy said. “He’s never really played true point guard before. So, given that, I thought he did a tremendous job. I know his numbers won’t reflect that but all he can do is play that position to his strengths.”

The Wildcats dominated on the glass as well, out-rebounding the Bobcats 50-29 overall and 20-10 on the offensive glass. 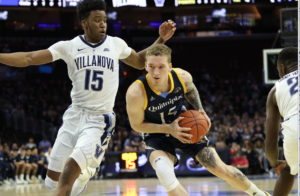 [/media-credit]On the other side, Villanova’s guards dominated the game, as senior Phil Booth led the way scoring 23 points on 7-for-16 shooting.

“[Booth] is as every bit as good as any player in the country and I think he’ll show that this year,” Dunleavy said.

Sophomore Collin Gillespie had a solid game himself, finishing with 16 points, including back-to-back 3-pointers in the first half to extend the Wildcat lead to 26-5.

“I think we had stretches where we played well and stretches where we didn’t play well,” Dunleavy said. “The ‘moral victory’ is in how you respond, not within the game. If we can come back and practice really well to get ready for our next game and use [tonight’s loss], that would be a victory for us.”

Villanova led 47-20 at the break basically without star senior forward Eric Paschall, who picked up two quick fouls and went scoreless in five first half minutes.

Paschall, who scored 26 points in the Wildcats opener against Morgan State, made his presence felt in the second half as he finished the day with a team-high 8 rebounds to go with 11 second half points.

Graduate student guard Cam Young and junior guard Travis Atson led the way for the Bobcats – especially in the second half – as the duo scored 17 of the Bobcats 33 second half points.

Young was the high-man for the Bobcats with 18 points, but struggled to score efficiently against the Villanova defense as he shot just 7-for-18 from the field.

Atson looked like the 1B to Young’s 1A in the Bobcats offense, as he made numerous driving baskets in traffic.

First bucket in a Quinnipiac uniform for @cantstoptrav after a series of up-fakes and spins pic.twitter.com/JVMZy05gV1

“What Travis brings to the table is he plays hard,” Dunleavy said. “He did that tonight. What we’re trying to figure out is while we play hard, how do we function and operate as a unit.”

The Bobcats were much more competitive in the second half, getting outscored by just six points.

“We showed some potential during the game,” senior forward Abdulai Bundu said. “We showed spurts [defensively] where we played a few good possessions. It’s there. What we want to do is there, just trying to put it all together for a longer period of time.”

Both Dunleavy and Bundu talked about the importance of the team playing together and moving to the next thing as they look to find themselves in the same position at the end of this year as they did last season.

“We have a brand new group again,” Dunleavy said. “We’ll talk about it a lot all season that it is about growing and being the best version of ourselves at the end.”

The Bobcats will take on the Hartford Hawks on Thursday Nov. 15 in their home opener.

“Today [Villanova] was a tough team,” Bundu said. “We’ve got to give it to them. It was one of those games where we were all jittery, we were all excited.

“At the end of the day [we just need to stay]  together and keep our heads up, no matter what a team does.”