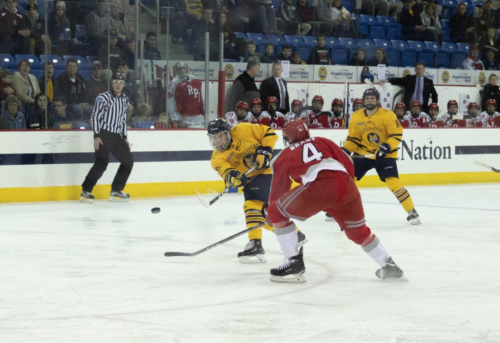 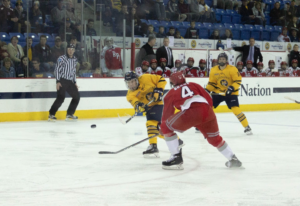 “That’s how we should play every night,” Quinnipiac senior captain Chase Priskie said. “We saw that earlier in the season, and that’s the intensity that we expect to bring every night. I really was happy how we played, how we refused to give RPI time in space with the puck, and just overall I was really happy with all five guys as a unit.”

Priskie had himself a night as he recorded his 29th career goal as a Bobcat which sets a new Quinnipiac Division I record for goals by a Bobcat defensemen. The captain put the icing on the cake with the third goal of the game, solidifying the Bobcat’s victory. He has scored seven goals this season and has a goal in six consecutive games.

In just his second start of this season, junior goaltender Andrew Shortridge earned his seventh career shutout. He saved all 12 of the Engineers’ shots.

“The whole unit as a team stepped up and played very solid defensive hockey,” Shortridge said. “Like you said, only 12 shots given up. A couple odd-man rushes, but that’s what I’m here for. They did a great job of not allowing RPI to have time in space, and just limiting their opportunities with the puck.”

Quinnipiac’s 3-0 shutout Friday night was its second shutout of the season. Although seeing a shutout is nice, Shortridge insists that it necessary.

“I’m just always ready for any opportunity I get whether it’s back-to-back or I go two months without seeing a start,” Shortridge said. “Just going day by day and making sure I’m ready every day in practice.”

Quinnipiac freshman forward Daniel Winslow got his second career start against Rensselaer. In the first period, he crashed to the net for a chance to poke the puck past the goaltender. After official review, the goal was confirmed, giving Winslow his first collegiate goal of his career.

“It felt really good, especially it being only my second game,” Winslow said. “I didn’t really see it go in right away, but I saw Joe and he said it went in, so I celebrated with him.”

Despite not starting much this season, Winslow has kept a positive attitude and continues to work his hardest each day in practice. He has made connections with teammates, especially forward Joe O’Connor.

“It’s awesome. Me and Joe have actually been friends for a long time, since youth hockey,” Winslow said. “So, being able to play with him and get my first goal with him is awesome.”

Winslow’s goal will be one to remember, especially for his parents. He plans on giving his career puck to his parents rather than keeping it for himself.

“I’ll give it to my parents,” Winslow said. “It’s more special for my mom.”

Quinnipiac will look to keep its undefeated record at home against No. 12 Union at 7 p.m. Saturday night in Hamden.