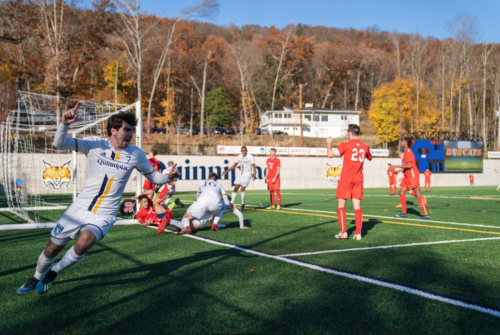 The Quinnipiac men’s soccer team will make its second appearance in the MAAC Championship in the last three years after it defeated the Marist Red Foxes, 3-3, on Wednesday in a game that went to penalties, with Quinnipiac winning 8-7 in 10 rounds.

From the beginning of the game, things looked bleak for the Bobcats. They couldn’t possess the ball much outside of their own half, and it seemed like only a matter of time until they would be trailing. That moment came in the 13th minute when Marist’s junior midfielder Samad Bounthong scored the game’s first goal. It was less than four minutes later when Bounthong assisted on teammate Marcus Ginman’s goal, giving the Red Foxes an early 2-0 lead. 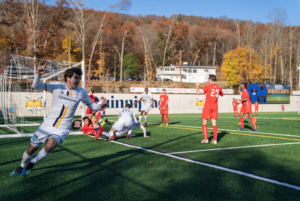 [/media-credit]“It sounds cliché, but it’s just belief,” Quinnipiac head coach Eric Da Costa said of the team’s mindset when facing the early deficit. “We just put ourselves in a really difficult position, but we continued to believe, and it was important to get one before the half.”

Quinnipiac finally scored that goal just five minutes before halftime, when senior forward Rashawn Dally turned the tides with his sixth goal of the season. A cross to junior forward Eamon Whelan resulted in a blocked shot, but Whelan was able to recover the loose ball and play it on to Dally, who sent a screamer into the bottom left corner of the net to cut the lead in half.

It only took one minute of the second half for the Bobcats to even the score. Whelan received a cross in the air, took it to the ground with his chest, and floated a ball perfectly over Marist junior goalkeeper Ryan Sinnott to score his 13th of the year.

In the 83rd minute, Junior defender Jeppe Haehre scored the next goal for Quinnipiac, streaking into the box and sending a ball off his head and into the net to put the Bobcats up 3-2 with just seven minutes remaining in regulation.

Marist didn’t just lay down and accept defeat. With only six minutes left to play, senior midfielder Beau Hornberger scored to ties it at three and force overtime.

After an uneventful first overtime period, both teams turned up the heat in the second. The Red Foxes found themselves constantly on the attack, and the aggression paid off in the eighth minute of the period. A controversial handball in the box gifted Marist a penalty kick with fewer than two minutes remaining in the game.

“I think it’s a really, really harsh call at that moment of the game,” Da Costa said. “The way that the law is written, in my opinion it’s not a penalty, but you know, they gave it.”

With a trip to the MAAC Championship game on the line, the team rallied around sophomore goalkeeper Jared Mazzola as he prepared to defend against the penalty kick.

Mazzola made the play of his life, guessing left and diving to save the ball despite the scouting reports that said senior midfielder Simon Lund Jorgensen always goes right.

“There was a lot of pressure,” Mazzola said. “I knew where he was going when he was walking up, it was just a feeling I had, and I just knew it.”

The save gave the Bobcats new life, and they were able to hold off Marist for the remaining few minutes. After 110 minutes of play, the game had totaled six goals, 33 shots, eight yellow cards, and 41 fouls. With all that in the past, the teams entered into a penalty kick shootout.

His confidence shined through as he made an incredible play, diving to his right to save Marist’s first attempt, keeping the score even at 0.

From there on, it was goal after goal, each team only missing once more. In the tenth round, the Bobcats found themselves leading 8-7 as Marist stepped up to the line to even the score once again. Mazzola had other plans though, saving the shot and sending the entire stadium into a frenzy.

“The pressure was big, but I felt that for the Marist goalkeeper it was a little harder,” Mazzola said. “We had all these fans and they were just boosting me and so all that pressure, all that anxiety I was having, it all just went away, and I could focus on the game.”

Da Costa was thrilled for his players and staff following the victory, opening up about the team’s struggles and fight to reach this point.

“Sometimes to get here you have to go through the fire,” Da Costa said of the Bobcats’ 0-4-1 start. “When you’re in that fire, you either stand still and let it consume you or you move forward, and you push through, and they pushed through. They had a decision to make, they made that decision, and the reason we’re heading into the final is because they believe.”

The win over Marist gives Quinnipiac its second MAAC Championship appearance in just three years. Quinnipiac will host Rider in the final on Sunday at noon with a trip to the NCAA Tournament on the line.