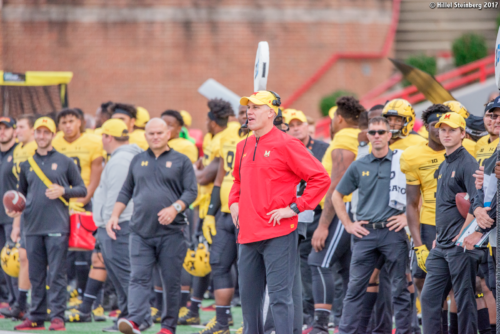 Jordan McNair, an offensive lineman for the University of Maryland football team, passed away this past June after suffering a heat stroke in a May 29 practice.

The incident led to an investigation into Maryland’s football program. Head coach DJ Durkin was placed on administrative leave by the university as the investigation was conducted into McNair’s death.

The University of Maryland reinstated head football coach DJ Durkin on Oct. 30, almost three months after he was placed on administrative leave.

The next day, Durkin was fired without cause, according to university spokesperson Jessica Jennings.

Durkin and multiple members of the Maryland training staff had been placed on administrative leave due to the handling of McNair’s hospitalization, and eventually his death.

While there was certainly time needed to conduct a proper investigation, Durkin should have already been fired by Maryland and should not have been reinstated, even if it was only for one day.

Durkin’s reinstatement had led to disapproval from players, the parents of the late McNair as well as the Governor Larry Hogan, according to USA Today.

SEC Network analyst, and former NFL quarterback Tim Tebow sounded off on how Maryland handled the situation, saying that the school allowed social media to influence  the decision.

“You need to make a decision and stand with it,” Tebow said. “People are so afraid to have conviction to believe in somehting when they make a decision.

Tebow has a point. Maryland waited for the public backlash before making a final decision. If you’re going to decide to keep Durkin, stand by it.

“This is not at all a reflection of my opinion of Coach Durkin as a person,” University of Maryland President Wallace D. Loh said in his statement. “However, a departure is in the best interest of the University, and this afternoon Coach Durkin was informed that the University will part ways.

“This is a difficult decision, but it is the right one for our entire University.”

Loh acted alone in the firing of Durkin, and it was immediately met with approval by Maryland Congressman Anthony G. Brown.

“Dr. Loh’s firing of Coach Durkin is the right decision and the decision that had to be made if the UMD community was going to ever move forward,’’ Brown said, according to ESPN.

While Loh was critical of the original allegations against Durkin, the decision to even allow the coach to be reinstated or not  was one that Loh was unable to make himself.

On Aug. 10, ESPN had reported allegations against Durkin and head strength and conditioning coach Frank Court stating that there was “a toxic coaching culture under Durkin and Court. Multiple sources close to the program describe past behavior of intimidation, humiliation and verbal abuse that created a culture of fear for the players. The sources also reveal allegations of unhealthy eating habits and using food punitively against the players.”

These allegations led to Durkin’s placement on administrative leave and the University of System of Maryland Board of Regents (USM) launching an investigation into the the May 29 practice that led to McNair’s death as well as the culture of the football program as a whole.

“I am profoundly disturbed by the media reports yesterday about verbally abusive and intimidating conduct by Maryland football coaches and staff towards our student athletes on the team,” Loh had said in a statement on Aug. 11. “Such behaviors contravene the educational mission and core values of our University. They are unacceptable. They will not be tolerated.”

On Tuesday, Oct. 30, the USM recommended to President Loh that he should reinstate Durkin and keep Damon Evans as athletic director.

The investigation done by the USM found that the cause of McNair’s death was due to improper treatment by the training staff for his heatstroke. The investigation also concluded that there was “no toxic culture” in the program, according to ESPN.

“There was a failure to identify escalating symptoms associated with exertional heat illness,” Rod Walters said after investigating the May 29 practice. “Including assessing vital signs, identifying the condition and aggressively treating the patient’s elevated core temperature. No apparatus was used for prompt cooling of the patient.”

The USM Board Chairman, James Brady, pushed for Loh to reinstate Durkin, but in this situation he had all the leverage.

Loh, who announced he would retire in June, was told by the USM Board he would be fired if he did not reinstate Durkin, according to ESPN.

“We believe that Coach Durkin has been unfairly blamed for the dysfunction in the athletic department,” Brady said. “While he bears some responsibility, it is not fair to place all of it at his feet.”

After major pushback because of the decision to reinstate Durkin, Loh acted against the board, and in my opinion, rightly fired Durkin the next day.

On Thursday, Nov. 1, Brady resigned from his position as board chairman, making this situation even messier.

The problem I have with this situation stems from the player reaction to the reinstatement of Durkin.

With Brady’s resignation, there are even more questions around why the USM Board had the power to force Loh to reinstate Durkin in the first place.

And while the USM Board did conduct a thorough investigation, I think the biggest aspect that makes the decision to reinstate Durkin puzzling is based on the player reaction it brought.

“Every Saturday my teammates and I have to kneel before the memorial of our fallen teammate,” Offensive lineman Ellis McKennie tweeted after Durkin was reinstated. “Yet a group of people do not have the courage to hold anyone accountable for his death. If only they could have the courage that Jordan had. It’s never the wrong time to do what’s right.”

McNair’s father, Marty, said that he felt as if “I’ve been punched in the stomach, and somebody spit in my face,” according to ESPN.

Once Durkin was fired, McKennie and teammate Tre Watson took to Twitter to express their feelings — feelings that I believe should have held more weight than the fact that Durkin wasn’t “fully responsible.”

These feelings, expressed by players who had to endure the loss of a teammate, show to me that Durkin should have never been reinstated to begin with.

In addition to the players feelings that were clearly against Durkin, ESPN found that the investigation into Durkin found players were uncomfortable going to Durkin when bullied and humiliated by Court.

The fact that players couldn’t turn to their coach shows there was clearly a problem.

Durkin, who took over for Randy Edsall in December 2015, made more than just one mistake that cost McNair his life.

His players proved that by advocating and praising his firing.

The USM Board was wrong to force Durkin back in, and I credit President Loh for doing what is right.

It is hardly justice for Jordan McNair and his family.

But it’s a start.