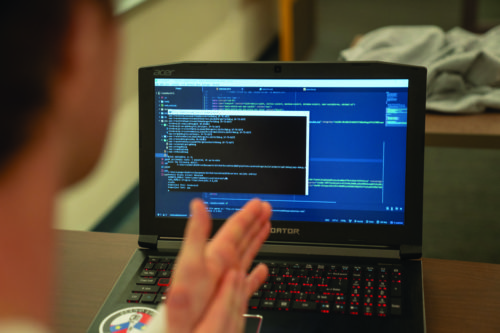 Ten teams of students waited to see what their efforts were worth as the room fell silent in anticipation as assistant professor of software engineering, Stefan Christov, began to announce the winners of the Hackathon competition.

Over fifty Quinnipiac students competed at the Quinnipiac Computing Club’s (QCC) semiannual Hackathon on Saturday, Nov. 3. Hackathons are known by programmers throughout the world as competitions to solve real-world problems by creating websites or mobile applications. Each Hackathon has a different theme or issue. Saving the environment and helping people treat anxiety and depression are just a few problems that Quinnipiac students have tackled in past competitions. 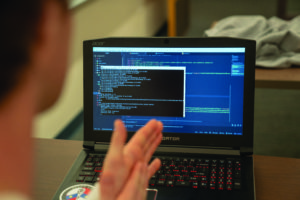 [/media-credit]“It was kind of stressful,” first place winner Julianna Shevchenko said. “In the past they had given more time. It’s kind of hard to get everything done. I’m glad that we scoped our project really well.”

During most college Hackathons, teams of students have one to two days to create their app, Christov said. However, Quinnipiac’s Hackathon is only six hours long. When the time runs out, each team must present their projects to a series of judges who determine the winners.

The theme of this Hackathon was political awareness. Students were tasked with creating an app or website that would help citizens become better informed about politics. Ten teams competed and three teams won prizes in the competition.

The first place prize of $400 went to team “Fantasy Font”, comprised of Alexandra Sazhin, Jonathan Bryce and Shevchenko. The team created a website called “Your Politics Tube”, which provided short videos that explain the different political parties and policies of the United States.

The time crunch was the same for the members of the second-place team, “CATS.” Charles Zhu, Kevin Sangurima, Massimo Angelillo and John Crawford won $300 with a website that provides users with suggestions on who to vote for in local elections based on their results from a political survey.

“It’s a rush,” second-place winner Charles Zhu said about Hackathon. “Those hours go by really quick. You plan out things that you try to do and sometimes you find out there are a lot of features that take way too much time and you gotta scale down and push out something that is presentable.”

In addition to Hackathon being a way for students to earn extra credit and win money, it’s a great experience and a potential resume-builder for future software engineers.

“The overarching thing is just to help the students get experience and get jobs,” QCC president David Lepore said. “It’s also for students to show their stuff to different companies, cause let’s say if you win, you can put it on your resume. If you make something good, you can show it to different companies when you do an interview.”

Christov, has been helping QCC put on the event since 2014. In addition to being good experience for computer science and software engineering majors, Hackathon is a way to start networking, Christov said.

“Sometimes we have people from the industry to participate in the judging session,” Christov said. “I know students who got internships because they met these industrial people and they liked their presentation. So, they actually offered them internships. It could be good for students in many, many ways.”

The judges of Quinnipiac’s Hackathon are generally professors and alumni. Many of the judges this year were recently-graduated alumni who now work as programmers at Cigna Health Insurance, a global health insurance company based in Connecticut and Pennsylvania.

Though very rewarding, Hackathon is a challenging event. Once it starts, it’s a breakneck race against the clock to produce a functional app. 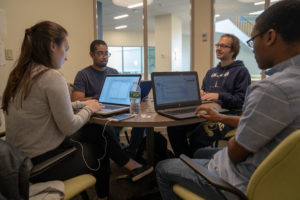 [/media-credit]“We experimented and we found that this seems to be the best format for the college environment here,” Christov said. “Because if it’s too short, nothing meaningful gets produced. If it’s too long, then students just don’t have the time to put into it—especially given that now it’s this time of the semester when so much work has piled.”

Quinnipiac’s Hackathon has been changing over the past few years. More people are entering the competition each year, according to Lepore. The apps from recent Hackathons also tend to be more complex than the apps from previous years.

“I think there’s a big improvement in the quality of the apps that are being produced compared to the first time we started,” Christov said. “I think part of it is because the software engineering program evolved and our courses started to teach more web technologies and mobile technologies. So students already come prepared to build pretty sophisticated apps.”

However, not every change has been positive for students or the QCC. Budget cuts have shrunk Hackathon’s prize pool. This year, the first place prize was $400, whereas in 2016, the winners won $700.

“It’s lower because of the budget cuts in every student organization,” Lepore said. “But, this is the year that we probably had the most amount of people at the very start, so I don’t think it dissuaded anyone from coming.”

Lepore hopes that future Hackathons will be closer to 24 hours long, similar to how it’s done in other colleges.

“We’re trying to head towards that direction,” Lepore said. “Especially this year, we’ve gotten more people so hopefully we might be able to do that if we gauge more interest.”

Christov is hoping to see more participation from majors other than software engineering and computer science.

“Any major could contribute to improving the proposed solutions in the apps that students are building,” Christov said. “For instance, there could be somebody with graphic design experience who can improve user interface. If the theme is healthcare, then there could be someone from the school of health sciences who vets the suggested idea and makes sure it’s practical from the medical point of view. I think involvement of non-engineering students would be really cool.”

QCC plans to hold its next Hackathon in the spring of 2019.