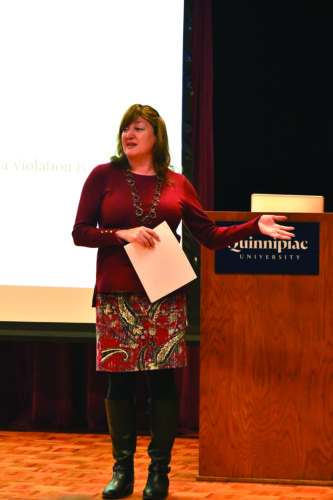 As the fall semester draws to a close, faculty members are reminding first year students who are enrolled in First Year Seminar (FYS) courses to adhere to the university’s academic integrity. Mandatory sessions were held in Buckman theater on Nov. 5 and 6 to discuss the causes of violation and how to prevent them from occurring. These sessions ran between 8 a.m. to 5 p.m, replacing the students’ normally scheduled FYS classes.

It is more likely for first year students to violate integrity since they are still fairly new to the academic community. 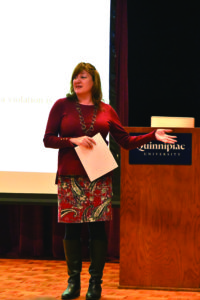 [/media-credit]Professor of athletic training & sports medicine Lennart Johns said that the students will be asked to write more papers and complete group projects in FYS, which is a big reason for why they were told to attend the seminar.

“In the past, freshman were introduced to (academic integrity) during welcome weekend, but with a firehose of information, around many topics, being provided to freshman during those few days, some of that information gets lost,” Johns said in a statement. “With that in mind, we are working with the idea of reinforcing important information over a broader time period and this is an example of that effort.”

Professor of legal studies Michelle Miller hosted one of the many sessions, where she opened her presentation with a brief roleplay between two peer catalysts. They demonstrated a scenario where a student named Jonah gave his essay to his friend, Tara in order to help her with formatting her own essay. However, Tara ended up copying Jonah’s entire essay and said it was her own.

“Under the academic integrity policy, they are both at fault,” Miller explained to the audience. “This is plagiarism. She took somebody else’s work, not just even a few words but the entire paper. But Jonah’s got a problem too, this is facilitation. He enabled the plagiarism by giving her this paper. It’s not like he intended to violate the policy. He wanted to help a friend, but facilitation is still against the code of academic integrity.”

Miller said that this type of scenario happens all too often at the university.

“One of the reasons why we like to start with this (example) is because we see this a lot,” Miller said. “The thing about this situation is you guys have friends and you really want to help your friends and you’re not really thinking about academic integrity.”

More examples like this were given, and students discussed amongst themselves whether or not they considered them to be violations. One of the answers was particularly surprising to the audience, where in an example a student was considered to be plagiarizing a textbook for writing a word-for-word introduction of the textbook for her essay, despite citing it and claiming that it wasn’t her words.

Plagiarizing can go beyond just copying off other people’s work; it can also include turning in a paper that’s already been submitted for a grade in another course, paraphrasing without proper citation and contract cheating, which Miller described as when someone pays another person to do their work for them. This violation is becoming more common at the university, according to Miller.

Professor Brian Fitzgerald teaches an FYS course and said it is beneficial to have students comprehend the policies on the same level as the faculty members do.

“I think it’s very important to have a level set with regards to this particular issue so that the students are perfectly clear on just what the policies are, and some of the pitfalls that other students have dropped into in the past,” Fitzgerald said. “Just (so they can) get the school’s perspective on this and share with the students so that everyone is up to speed in regards to this subject.”

Violations are also more than just plagiarizing, according to the university academic integrity policy. Violations could also include misrepresentation, misusing one’s relationship with the university, and collusion.

The session went on to describe the academic integrity process for a student who is accused of violating the rules, what a student could do to defend themselves if they are falsely accused, and the consequences of being confirmed to have violated the policies.

“You will get an email from the [Academic Integrity] office to let you know that there’s a report of a possible violation against you and then you have 48 hours to fill out the response form,” Miller said. “Once you’ve done that, then what happens depends on several factors. If it’s your first violation and you and your professor agree, then you can sit down with your professor and come up with a joint resolution. You decide what’s going to happen yourselves.”

The consequences for violating academic integrity are called sanctions, which can range from a failing grade on the assignment, suspension, or even expulsion. Miller clarified that expulsions are very rare, and typically most students who violate academic integrity once do not repeat the offense.

Freshman journalism major Eric Kurt said that the session was helpful for him.

“There were some things in the presentation that I did not know were essential for plagiarism, and knowing all that stuff about policies and not cheating on things,” Kurt said. “Some of the things on there weren’t really enforced at my high school, so it’s definitely good to know that kind of stuff now at Quinnipiac and for future classes.”

Miller concluded the session by recommending students to just be honest with their professors if they are having trouble with an assignment, set up an appointment at the Learning Commons or ask questions to be sure they are not violating any part of the policies.

If students are interested in reading more about academic integrity, they can go on MyQ and look at the menu for academics where ‘academic integrity’ should be located. There students can read the presentation that was given at the sessions.