Hoops are here: Juiced up 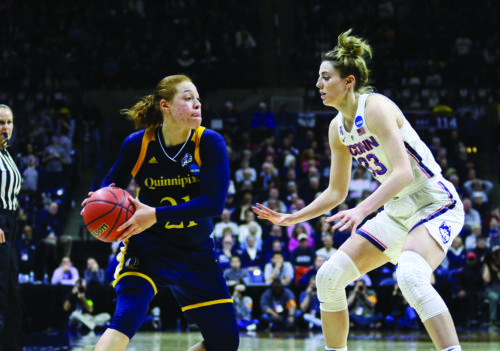 “Juiced up” has been the team’s slogan since this summer, emphasizing bringing energy and effort every day. 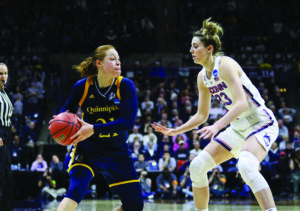 [/media-credit]“I think we’re just excited,” redshirt senior Jen Fay said. “Obviously we have to take it one game at a time and we have to get that MAAC championship first, so that it always our first goal. Then getting back to the tournament, we’ve done it before so I think everyone is believing.”

The Bobcats were picked as the preseason favorites in the MAAC this year after going 28-6 and 18-0 in conference play last season.

While they were unable to get back to the Sweet Sixteen, the Bobcats were awarded a No. 9 seed in the NCAA Tournament and knocked off Miami in the first round for the second consecutive season, before losing to perennial championship contender UConn in the second round.

“The first two times [in the NCAA tournament] were unbelievable,” Fay said. “Getting to the Sweet Sixteen, winning one game was our goal, and then we won two games. Obviously getting back there last year, we didn’t get back to the Sweet Sixteen but we played the powerhouse of UConn and really put our name on the map again.”

Quinnipiac has certainly put itself on the map, as for the second consecutive year, the program earned points in USA Today’s Coaches’ Poll. This year, the Bobcats received eight points in the Coaches’ Poll, but head coach Tricia Fabbri is focused on her team getting better every day.

“Each part of the year is very different,” Fabbri said. “I think we’re all getting a little itchy at this point to start the season. Even when we begin the season, we aren’t going to be as good as we can become in March.”

McClure, who averaged 12.2 points per game and 5.8 rebounds last season, was selected as the MAAC’s preseason player of the year for the second consecutive season after being named First Team All-MAAC last year.

“[McClure] is elite on both ends of the floor,” Fabbri said. “I like that she wants to be a consistent 3-point shooter and continue to develop her game. She’s done that every year over the summer developing an aspect of her game and that’s what makes her great, she’s just never satisfied.”

“It’s a great honor, but it really doesn’t mean anything because it’s the preseason,” McClure said of being picked as MAAC preseason player of the year again. “But it’s good to be recognized by the other coaches in the league.”

Fay echoed her fellow seniors thoughts, highlighting the team-first mentality that has been so key to their success over the past few years.

“It’s always nice to be recognized for your accomplishments and everything but we really focus on team basketball at Quinnipiac so whether or not we have one player or two players [on All-MAAC teams] we know at the end of the day we’re just going to work hard for each other,” Fay said. “All summer everyone has been working. Everyone has been working on their game and trying to improve on their strengths and weaknesses and it’s been showing.”

McClure is among them, as she has focused her efforts this offseason on improving her outside game.

“I want to shoot the three consistently this year,” McClure said. “I failed to do that the last three seasons but this year I want to be recognized as someone who can step behind [the arc] and nail it a few times.”

Quinnipiac returns five seniors and four juniors that have faced just about every challenge thrown their way the past two seasons.

“It’s so comforting as a coach to know that you have all this experience that is returning,” Fabbri said. “That does make a difference because when you’re in those spots of adversity, we’ve been there and we’ve built up those experiences.

“It’s having success in those most adverse spots, whether it is being at home against Marist or on the road up at Siena or seeing Miami again in the NCAA tournament, all those situations and having success in them with this core senior unit allows them to lead from experience and wisdom.” 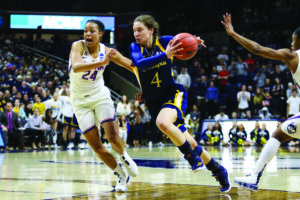 [/media-credit]For the second consecutive season, Fabbri has challenged her team with a difficult out of conference schedule. The Bobcats will open the year against Drexel (picked second in the Colonial) and Bucknell (picked first in the Patriot League) before taking on Providence and No. 11 Texas.

The Bobcats will play the Longhorns in their first game of the Florida Gulf Coast Showcase before possibly squaring off with another top-25 team in their second as they will play either Michigan or No. 16 Missouri.

“A big part of the goal is to beat these teams not only when we are seeing them in March, hopefully, but also to see them in November. That is a big part of our recipe again to see where we are having success against really great teams early and to see where our deficiencies are and where we need to get better immediately.”

The Bobcats will not play a home game until Dec. 2 when they take on Central Michigan at the People’s United Center.

Around that time, the Bobcats could be getting an extra lift in their lineup as well. Junior guard Vanessa Udoji, who tore her ACL just six games into last season, is eyeing a late December return.

“Right now I’m at eight months [in my recovery],” Udoji said. “We’re looking at maybe conference play, maybe the end of December [for my return]. There’s no real timetable it’s just how my body is feeling. I don’t really want to rush anything but when it’s time to go it’s time to go, I’ll be ready.”

Udoji, who started all six games she played in, averaged 8.5 points and 3.5 rebounds per game before going down. However, that has given her all the more reason to get back to where she once was.

“There’s always that motivation that you want to get back to where you were,” Udoji said. “It’s kind of just always taking it day-by-day, staying positive and just working all the time and knowing you are working for a great reason and end goal.

“It’s always nice to have my team, the coaching staff, my family and everyone who is really supporting me. It’s nice having the support, everyone’s pushing for me to come back so it only pushes me to go harder and harder every day.”

Udoji would provide a huge lift for the Bobcats as they look to once again go undefeated in conference play.

“I feel like the last couple years we’ve had that target on our back [in MAAC play],” Fay said. “Of course coming off a championship and an undefeated season every team really wants to beat us. We know we’re going to get every team’s best shot every game and we look forward to it, that’s what makes it fun to compete and play in those tight games.”

The MAAC tournament will take place from March 7-11, where the Bobcats will once again look to win it all and clinch an NCAA Tournament berth.

“We’re ‘Juiced Up’ this year, we’re ready to go,” Udoji said. “Everyone has the same mindset. Our seniors now, they know what they want. Everyone is just fighting for the same thing.”