Quinnipiac men’s ice hockey loses its first game of the year, 5-1 to Dartmouth 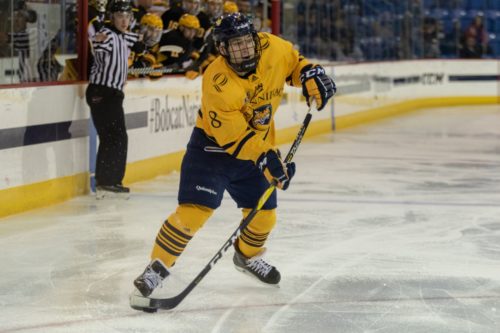 The winning streak finally came to an end as the Quinnipiac men’s ice hockey team suffered its first loss of the year at the hands of Dartmouth by a score of 5-1 on Saturday night in Hanover, New Hampshire.

“We had low energy, low compete, not a lot of care,” Quinnipiac head coach Rand Pecknold said. “It’s a good group, a good group of guys, but they need to realize if we’re going to be successful, we’ve got to compete every game. It was a waste of effort tonight.” 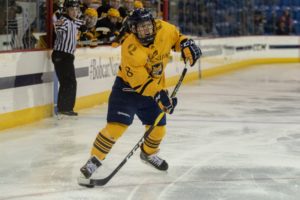 In the second, it was again all Big Green. At first, it was freshman forward Drew O’Connor with the sweet move on the rush to beat Petruzzelli to open the scoring. Then, less than two minutes later, it was sophomore forward Quin Foreman with the power play goal.

The penalty kill continued to not be efficient enough for Quinnipiac as sophomore forward Collin Rutherford fired a one-timer past Petruzzelli off the setup from junior forward Will Graber and senior defenseman Connor Yau. It was a 5 on 3 goal that would put Dartmouth up 3-0 just over the halfway point of the period. Dartmouth would take that lead into the final 20 minutes.

“I would keep it as simple as it wasn’t very good in all aspects,” Pecknold said in regards to the team’s penalty kill.

Quinnipiac came out and did exactly what it needed to do in order to spark a comeback as it was the captain, senior defenseman Chase Priskie with his team-leading sixth goal on the year. A pass through the slot from sophomore forward Odeen Tufto found Priskie in his primary spot on the power play for the man-advantage goal.

But minutes after, a horrible turnover by the Quinnipiac defense led to Dartmouth’s freshman forward Jeff Losurdo wide open in the slot with the puck and he made no mistake of the opportunity. It was Losurdo’s first goal on the year and the first of his collegiate career.

Dartmouth would add an empty-net goal halfway through the period when Pecknold decided to pull Petruzzelli on the power play so Quinnipiac would have a 6 on 4 advantage. The plan backfired as senior forward Carl Hesler would send it into the open net seconds into the power play, putting his team up 5-1.

The score would remain at that all the way to the final buzzer. Dartmouth’s junior goalie Adrian Clark finished with 25 saves and five of Dartmouth’s players had two points.

While being critical of his team’s performance, Pecknold did praise the play of Dartmouth.

“I give Dartmouth credit, I thought they wanted it more than us,” Pecknold said. “They had a tough game last night, and they competed harder. They won battles and races, and their goalie played well.”

When asked about one positive take away from the game, Pecknold was at a loss for words.

“That would be a tough one,” Pecknold said. “I don’t have one right now. I probably could eventually come up with one. But we’ll learn from it. It’s a teachable moment. We need to realize that if we’re going to win hockey games, we need to compete.”

Quinnipiac will return to Hamden next Friday to face RPI (2-4 overall, 2-1 ECAC Hockey) at 7 p.m. at the Frank Perrotti, Jr. Arena.