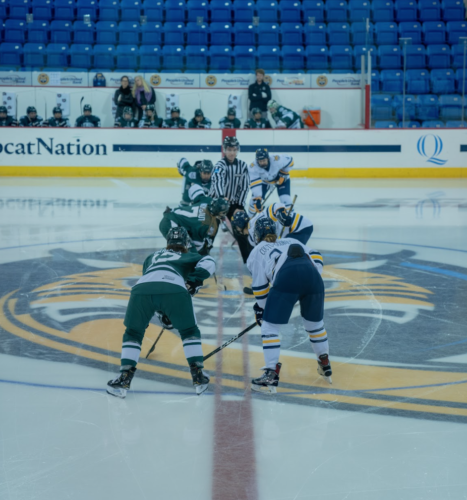 A game that seemed like anyone’s to take, the Quinnipiac women’s ice hockey team fell short against Dartmouth Saturday afternoon in overtime at the Frank Perrotti, Jr. Arena 3-2.

Quinnipiac head coach Cassandra Turner acknowledged the inaccuracy of little things that the team needs to work on to get back on track.

“We made too many mistakes to end up on the right side of the game today,” Turner said. “I think there is a lot of things that we need to work on and get ready to go over these next two weeks before we hit five games in nine days.”

From when the puck dropped, the game jumped to a fast start. Less than a minute into the game, sophomore center Taylor House getting both her first goal of the season and the Bobcats in front 1-0.

House described the moment of getting her first goal of the season and how they were able to get it.

“First shift, kind of getting our legs going,” House said. “Skate harder than them and we just popped into the goal.”

Not even 20 seconds later, the Big Green responded with a goal of their own from senior forward Tess Bracken, also scoring her first goal of the season and tying the game at one.

From that point, both teams had opportunities to score, but Dartmouth’s senior goalie Christine Honor and Quinnipiac’s junior goalie Abbie Ives played from that point flawless, saving every opportunity set up by both teams. Despite the fact that the teams were tied at one after the first period, it seems as if Quinnipiac dominated the first period, outshooting Dartmouth 11 to four.

The second period, in a sense, played out to be a replication of the first period. The first quarter of the period was a defensive battle, until the Big Green took the lead again, this time from junior defensive man Bailee Brekke, who was the third player in the game to score her first goal of the season.

Playing with a chip on their shoulder, the Bobcats were able to claw their way back into the game and score a goal before the end of the second period to tie the game again, this time from Sarah-Eve Coutu-Godbout, who was also able to get her first goal of the season. It still looked evident that that Bobcats should be winning the game, as they were yet again outshooting the Big Green six to two in the period.

Going into the period, both teams were trying to close this game out, but weren’t able to. Both teams were putting up results to try and score, with the Bobcats putting up eight shots in the period, while the Big Green put up six. However, those shots were played well by both goalies, who were able to let nothing behind them and force the the game into overtime.

When overtime came around, it seemed like Dartmouth was able to control the period, as its defense was able to force Quinnipiac to no shots on goal, while putting up two shots on goal, one being the game winner by sophomore forward Jennifer Costa, the final player in the game to get their first goal of the season.

In the end, Quinnipiac head coach Cassandra Turner believes her defense wasn’t playing the best in the game and there is room for improvement.

“I don’t think they [goaltending and defense] would be happy with the way they played today,” Turner said. “I think they all had some good moments, but we needed better.”

The Bobcats look to get back on track as they play they play Cornell Big Red on Friday, Nov. 16 at Frank Perrotti, Jr. Arena. With what they learned from this game, Coach Turner knows what her team must work.

“Making plays together, we really got individual in the third period,” Turner said. “It showed, as we lost the puck in transition back as we were changing poorly.”