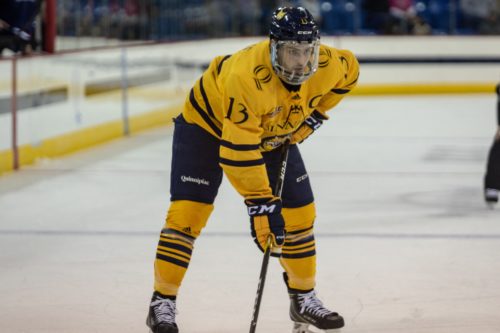 The Quinnipiac men’s ice hockey team came into the Bright-Landry Hockey Center in Cambridge, Massachusetts undefeated and left with its undefeated record still intact as it defeated Harvard by a score of 5-3 in its ECAC Hockey opener. 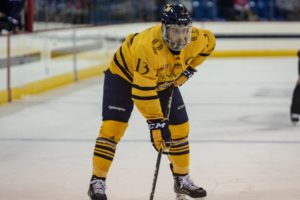 “It was a great win for our program tonight, with our young guys and the first ECAC win,” Quinnipiac head coach Rand Pecknold said. “I think it was a really good example of that you don’t need to be perfect to win hockey games, because we were far from perfect. But I loved our energy, our compete level was excellent.”

Quinnipiac jumped out to an early 1-0 lead in the first period, when Priskie was able to tuck the puck in between the legs of Harvard’s junior goalie Cameron Gornet and just barely cross the goal line.

Then, with just 25 seconds left in the first frame, Quinnipiac junior forward Alex Whelan was able to send a pass to a wide open Tufto for the one timer to put Quinnipiac up 2-0 before the buzzer. Both Tufto and Priskie’s goal were their fifth on the season, and makes them tied for the team lead in goals.

The second period had an absolutely wild start. First, it was Quinnipiac pouring on two more goals, as Fortunato and freshman forward William Fallstrom each collected tallies. However, Harvard immediately answered with a goal 31 seconds later from freshman defenseman Jack Rathbone, his first of his college career.

Less than a minute later after the Rathbone goal, it was Harvard’s senior forward Lewis Zerter-Gossage who beat Quinnipiac’s sophomore goaltender Keith Petruzzelli with a backhand and it was all of a sudden back to a two goal game. This was all less than four minutes into the second period.

“Responding to adversity is something that we’ve been focusing on all offseason,” Rafferty said. “Not only [Priskie and senior forward Scott Davidson], but the rest of the leadership steps up and kind of rallies everyone in after something like that happens.”

Quinnipiac’s response to the adversity was evident, as the team did not allow Harvard to score for the rest of the period.

While holding onto a 4-2 lead, freshman forward Ethan de Jong collected his first goal on the year late in the period after a great pass from Rafferty. Rafferty found a wide open de Jong back door as he slid the puck through traffic and it found its way onto the freshman’s stick for the goal. Quinnipiac would take a 5-2 lead into the final 20 minutes.

“I was pretty excited [scoring my first goal],” de Jong said. “It feels good to get that off my back.”

In the final 20 minutes, Harvard was able to pull within two when senior forward Michael Floodstrand finished off a great rush with junior forward Colton Kerfoot and junior defensemen John Marino. Kerfoot found Floodstrand backdoor for the tap in goal, which was Floodstrand’s first of the year.

However, that was all the Crimson would muster as they could not put anything else past Petruzzelli and Quinnipiac took this one 5-3. Petruzzelli recorded 34 saves in his sixth win on the season.

“This game will go a long way in terms of players buying into our culture,” Pecknold said. “When we do that, we get rewarded like we did tonight.”