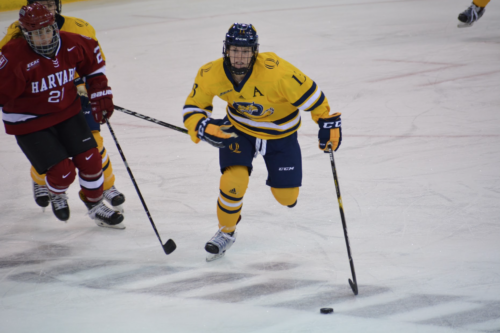 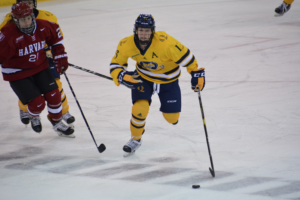 The first aspect is that the Bobcats have rebounded from their 0-4-2  start, to begin conference play with a 3-0-0 record. Head coach Cassandra Turner credits Harvard for the talent its recruiting and the style of hockey it plays with.

“Harvard’s a great hockey team, and they have some really skilled forwards that can create on the rush,” Turner said. “Our team was ready to execute today and I really like where we are and what we can do in our conference,”

The first period, both teams struggled to find a rhythm as they finished with a combined 15 shots and each team had a penalty.

Whereas the second period, the chances started to come and the Bobcats tallied 11 shots on goal, but Harvard freshman goaltender Lindsay Reed saved all of them and would finish the game with 25 saves.

In the third period, action began to pick-up and the Bobcats striked on their third power play as junior defenseman Kenzie Prater put a wrist shot in the top right corner to give the Bobcats a 1-0 lead.

That was Prater’s first goal of the season and even though she was able to put in the back of the net, she credits the team’s defensive strategy.

“We did a really a good job today,” Prater said. “It came from our forwards as they had great backchecks and great communication throughout the game.”

The other contributing factor in Friday’s win was Quinnipiac junior goaltender Abbie Ives getting her third shutout of the season. She finished the game with 17 saves and has now stopped 59 consecutive shots.

“I think struggling early on, pushed as a team to care more about the little things,” Ives said. “Just being patient, shifting to the puck and scanning are little things that can make a big difference throughout games.”

The Bobcats will shift their focus to Saturday, as they take on the winless Dartmouth Big Green and look to extend their winning streak to four games.

Even though Dartmouth is winless, Turner still wants her team keep their emotions in check and her team to continue the things that have gotten them to win three games in a row.

“We have to bounce back, our team is on such a huge high about this win and I told them that they should feel that,” Turner said. “But we have to get back to business Saturday because every point in our conference is something that you battle and fight for. Dartmouth is a good hockey team that’s coached incredibly well and we know they’re going to try to make us uncomfortable and we have to try to attack them on Saturday.”