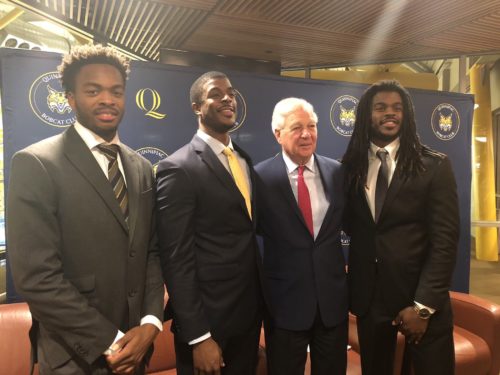 It’s not often that a college basketball broadcasting icon visits a small, mid-major campus, but that’s what happened last week when Bill Raftery came to Hamden.

The event was free for members of Quinnipiac’s Bobcat Club, which is essentially a group of alums and university supporters who donate at least $100 each year to Quinnipiac Athletics. Each member picks where their money goes, whether it be to any of Quinnipiac’s 21 Division I athletic teams, athletic academic support, intramural programs or sports medicine. Non-members were charged $20 for admission, which included food and drinks.

“We’re excited to have this event,” Amodio said. “It’s a new initiative to engage our fans and alums and the community. It  helps people understand where we’ve been as an athletic program, the level of commitment we’ve seen over the years to get where we are today.”

After Amodio gave a brief introduction speech, Fabbri took the podium to kick off her 24th year leading the women’s program.

“We talk about everything we’re trying to do as an athletic program – nurture individuals who will be great teammates, great student-athletes, great members of our institutional community – [Fabbri] does an excellent job [of that] on a year in, year out basis,” Amodio said.

The women’s basketball program has been one of the most successful on campus during Fabbri’s tenure. Last season, the Bobcats won their second straight conference championship and won an NCAA Tournament game for the second straight season.

“It’s an exciting time of year, a new season is on the brink for us,” Fabbri said. “I am a part of a team, and I couldn’t do it without my team.”

Fabbri went on to praise her current senior class of Aryn McClure, Jen Fay, Paula Strautmane, Edel Thornton and Brittany Martin, who will lead the Bobcats into another season as conference favorites.

On the men’s side, Dunleavy took a different approach to his address. Rather than harping on the history of his program – he’s only in his second year as head coach – Dunleavy focused on the future.

“This is what an evening of Quinnipiac basketball should look like,” Dunleavy said. “I couldn’t be more pleased to see this atmosphere – kind of like a standing room only, packed house – this is the enthusiasm we want to build around these programs.”

After Dunleavy finished up, it was Raftery’s turn to speak. Raftery, a 75-year-old from New Jersey, currently serves as a college basketball analyst and color commentator for Fox Sports, but worked for ESPN for 32 years prior to moving to Fox.

Raftery is known for his untraditional broadcasting style, as he often yells out random phrases that seem completely unrelated to basketball. Perhaps his two most perplexing are “Onions!” when a player makes a big shot late in the game and “A little lingerie on the deck!” when a player makes a shifty move and loses the defender.

Based on those unique catch phrases, it was clear that everyone in attendance was in for an interesting night. Right out of the gates, Raftery was firing off jokes.

“Baker is someone special,” Raftery said. “He’s from an extraordinary basketball family, a close-knit family. He wanted [his former boss] Jay Wright here tonight, but Jay has become an author, but he’s writing a book on the 10 greatest American people and what Jay thinks of the other nine.”

For about 10 minutes, Raftery electrified the crowd with dozens of jokes that kept everyone unable to contain laughter. Finally, though, he got serious.

“This is a community venture. I’m not shocked – I guess I could say surprised – with this campus,” Raftery said. “I basically visit every campus in the country that’s involved with college basketball, and you’ve got a gem here. You’ve got extraordinary people in your administration, your coaching and your players. It’s all about you getting behind them.”

Raftery mentioned some classic mid-major underdogs that have succeeded in college basketball – George Mason, Butler, UMBC – and said how he believed Quinnipiac could model itself after those programs. The women’s team has already started doing that over the past few years, and the men’s team isn’t far behind, Raftery added.

Now through the first year of these season-opening events, Quinnipiac is ready to make it an annual tradition.

“This event embodies the commitment from the university for us to compete at the highest level – hockey, basketball and across the board – and provide our student-athletes with all the resources they need to compete for national championships,” Amodio said.