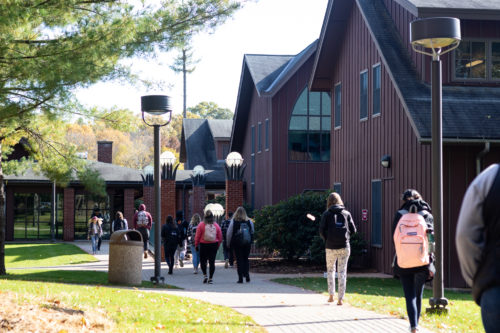 The College of Arts and Sciences (CAS) is responsible for teaching most of the core classes at Quinnipiac, but is also at the core of the problems facing the university. Currently, Quinnipiac does not have enough faculty or facilities to maintain the high quality of education that it has become accustomed to delivering and the College of Arts and Sciences has been hit the hardest.

Chair of the department of political science and philosophy, Scott McLean, has felt the effects of the resource deficits in his department for years, but acknowledges that the problem is much larger than that.

“In the College of Arts and Sciences, the number of faculty is not keeping pace at all with the increasing number of CAS students that we have and the increasing need for general education courses,” McLean said. “And that’s affecting the quality.”

“We have far more majors, especially in the freshman and sophomore classes and by the time those students become seniors,” McLean said, “it will be a real challenge to offer them the core political science courses in the way that we have become accustomed to.”

“There was only one section available,” Rogers said. “I remember there were three sections for this poli sci class and I really didn’t want to take the night one, but the night one was the only one available and the other ones said for poli sci majors only.”

Due to the fact that enrollment in the major has increased substantially, McLean has resorted for pre-registering majors required for political science. This creates a shortage of slots for minors and students looking to fulfill University Curriculum (UC) requirements.

Some of the shortages can be attributed to small changes, such as McLean teaching a communications course and a course in Washington D.C., as well as Professor Jennifer Sacco’s sabbatical leave. Another loss can be attributed to Professor Seán Duffy’s reduced teaching load due to his new position as the executive director of the Albert Schweitzer Institute.

Duffy, who was previously the chair of the political science and philosophy department, said that the problems have been building long before this year.

“I’m kind of intimately aware of some of these pressures and how these pressures have been building for several years,” Duffy said. “The world out there is now looking to the kinds of student skills that are taught in CAS majors, like critical thinking, like creative thinking, leadership, those kinds of things. When I started here at Quinnipiac somewhere around 20 percent [of students applied for CAS] and probably the norm here has been 18 to 20 percent of the students would come in interested in an arts and sciences degree and with the freshman class this year, 28 percent came in interested in arts and sciences.”

“If we have about 400 students graduating from arts and sciences in a given year, that means we need something like 25 or 30 sections of capstone to be offered every year,” Duffy said. “And we want them to be meaningful experiences so we’re going to need significant new resources to do this.”

However, these are resources that CAS does not have. Hiring more full-time faculty would be the only solution but according to McLean, this would be impossible due to space constraints. Full-time faculty need offices to advise and meet with students, but Quinnipiac does not currently have room for more offices.

However, Robert Smart, dean of CAS, is willing to get creative.

“When you walk down into Tator where the bank used to be, you notice there’s no bank there,” Smart said. “We’re asking if we can use that for offices. We’re going to find offices.”

Smart is considering occupying some of the underutilized research space on the North Haven Campus known as the “vivarium,” but believes the situation is not ideal.

“Now we’re talking about how to connect the vivarium on North Haven to the vivarium here. Can we increase the shuttle schedule?” Smart wondered. “For two years at least that’s going to have to be the game because it will take two years to build a building and then get in on-line.”

Smart is amazed at the speed at which Quinnipiac has outgrown its facilities, even after the purchase of the North Haven campus in 2007.

“I’ve been here long enough that I remember when President Lahey announced that we had bought North Haven,” Smart said. “I remember he stood in front of all of us and he said, ‘By buying this campus we have solved the space problems for Quinnipiac University for the next 50 years.’ We’re out of space, and that was not 50 years ago.”

Besides political science and philosophy, Smart identified criminal justice (CJ) as another department in need of resources.

“My CJ faculty are running on fumes, I have kids hanging out the window, I have advisors doing 45, 50 students. It’s crazy,” Smart said.

Increased class sizes is another problem occuring as a result of the faculty and space shortages in CAS. In departments like political science, McLean  said they have begun to offer “double-classes” to fit twice as many students into one class section.

“These are occasional courses where it makes sense to have a larger class than the usual Quinnipiac-sized class,” McLean said. “A couple of classes are going to be you know 45, 50 students instead of the usual 25, 30 students.”

Alan Bruce, chair of the criminal justice department, believes these larger class sizes are not suited to productive learning.

“I think larger classes discourage a lot of students from voicing their opinions and makes it more difficult to generate class discussion,” Bruce said in an email.

The shortages facing CAS have led to the hiring of significant amounts of part-time faculty, according to a Faculty Senate Report from May 2018, delivered by former Faculty Senate Chair, Lisa Burns.

“I think sometimes students don’t realize that their faculty are part-time or adjunct until you go to meet with them in office hours and find out they don’t really have an office,” Burns said. They don’t have office hours. Well that’s because they’re a part-time faculty and they might be teaching here and at two other universities.”

Students, however, have noticed part of the problem.

Class registration period ended on Friday Oct. 26, and students across campus expressed anger and frustration at the limited number of seats in their required classes. Freshman law in society major Tamia Barnes explained how difficult the process was for her.

“I minor in theater and I can’t take any theater classes,” Barnes said. “Like that’s ridiculous. People really need to get some availability, some sections so people can get into the classes they need.”

Getting availability is difficult, and will require significant investment in resources, but Burns thinks it is necessary for Quinnipiac to make these investments on behalf of the students.

Burns believes Quinnipiac, especially CAS, needs significant resources to help restore the student experience to a respectable condition, despite the way the university has been able to make due with next to nothing.

“This is both our greatest strength and our biggest weakness,” Burns stated in her report. “It’s how we’re able to make things work in spite of being starved for resources. The problem is that we make it look easy, which has allowed the administration and this Board to assume that everything’s fine for too long. But it’s not fine.”