The movie ‘U’ should see 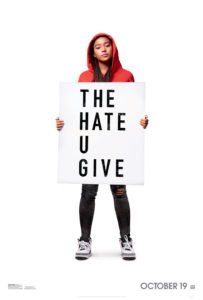 [/media-credit]The film adaption of the young adult novel “The Hate U Give” by Angie Thomas, was released at the beginning of October to rave reviews. The film details the powerful story of Starr Carter, a high school student who suffers a great tragedy through the death of a friend she has known since her childhood.

The film begins with Maverick Carter teaching his three children, all at the age of 10 or younger, the ins and outs of what it means to live as a black person in America. He educates them of the possibility of racial profiling and how to react when it occurs.

The film then cuts to Starr, now in high school, who lives in the all-black neighborhood of Garden Heights but attends the mostly white school Williamson Prep. She details how she has two versions of herself–the Garden Heights version and the Williamson version, and how the two may never intersect with each other.

As the scenes of the film moves along gracefully, we find Starr meeting up with her friend Khalil at a party. Eventually, after gun shots ring out at the party, the pair get into a car and begin to drive. They are pulled over by a white police officer. The officer refuses to announce his reason for pulling the car over. Khalil, frustrated by racial profiling, begins to argue with the officer. The officer instructs Khalil to step outside the vehicle and takes his license and registration.

While the officer is running the license, Khalil reaches into the car to reassure Starr. Starr is being very careful and making sure her hands are visible. Khalil then innocently reaches for a hairbrush on the seat. The scene then turns deadly, with the cop shooting Khalil–Starr being the only one to witness the horror.

Following the shooting, Starr goes through a difficult, psychological journey of self discovery to find her voice. Not just for herself, but to honor and defend Khalil as well.

Starr, played by Amandla Stenberg, most known for her role as Rue in “The Hunger Games,” gives a breakthrough performance. The capacity of emotion she displays in one single image of the film is astounding. Stenberg gracefully shows Starr’s rise from quiet girl to the girl who becomes a social justice warrior.

Russell Hornsby, who plays Starr’s father Maverick, gives an emotional performance as a man trying to defend and hold his family together. It is one of the most emotional and powerful parental performances I’ve seen in years. Hornsby gives a performance that warrants Oscar attention.

The screenplay written by Audrey Wells, who passed away from cancer the day before the film was released, is a magnificent piece of film writing. Wells is able to juggle various different storylines without the film losing focus and feeling that it will buckle under the pressure. This is also because of the swift direction completed by George Tillman Jr. The film is able to make agile shifts from a comedic note to tear jerking one in a matter of seconds and never does it feel like a tonal mess.

The film takes a strong inspiration from real life cases of police brutality that have become prevalent in the news in recent years. From the moment the news of another shooting hit the waves of social media, people’s anger begins to boil. Protesters took to the streets and fought for justice for the various victims. Hashtags were created and a movement was born. Similar to the events of the film.

Since the shooting of 17-year-old Trayvon Martin. The shooting of Martin ignited the “Black Lives Matter” movement. Since then various cases have added fuel to the fire like the strangling of Eric Garner. Garner was approached by officers under the suspicion of selling cigarettes without tax stamps. Garner complained of harassment by police officers and was then placed under arrest, but he moved his arm away. Garner was then placed in a choke hold on the ground by officer. Garner told officers the he couldn’t breathe four times during the encounter. Nevertheless the officers did not listen and Garner died. There are many high profile cases of police brutality such as the cases of Philando Castile, Michael Brown and Sandra Bland. In each instance a black person was shot by a white police officer. More often than not the officer faces no consequences for their actions.

This movie is more than just a young adult film, it encompasses emotions that few young adult films have been able to. “The Hate U Give” moves the genre in a strong step forward. This film has the power to become a classic and inspire people like few movies have done before.