The wizard of Haz 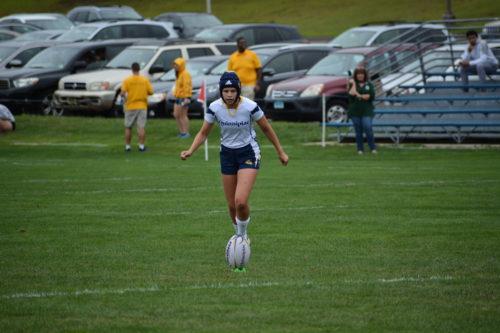 Her season is almost over, but her journey has just begun.

Quinnipiac freshman Mckenna Haz grew up in Shawnigan Lake, British Columbia playing a variety of sports other than rugby. Most crucially, she played soccer and developed a strong kicking game that was transferrable to rugby. However, Haz’s rugby career didn’t begin until high school.

[/media-credit]“I went to boarding school in Canada called Brentwood College School, and we had academics six days a week, so that’s a little bit different,” Haz said. “We are a part of a tripartite program, so you actually had to play a sport, and you had to do an art. So rugby was kind of introduced to me because I had to take a different sport during my first semester, and I thought I’d try it out.”

Although Haz started playing rugby late, she had interest in the sport since middle school. She also had ancestral ties to rugby, which also drew her to the sport.

Haz was not allowed to play rugby in middle school, so she thought it would be fun to try it out in high school. She continued a legacy set by her grandpa, the captain of the rugby team at her high school. Her grandpa’s high school friend and teammate, Marius Felix, was Haz’s high school coach and main mentor for her during these developmental years. The first year, Haz was placed on the wing, so her job was to get the ball, run with it and score tries.

Prior to coming to Quinnipiac, Haz traveled the world. She played in Canada for years and even received offers from Queen’s University, University of Victoria and University of British Columbia to play collegiate rugby. Ultimately, she turned down those offers and adventured to New Zealand to play 7s rugby for eight months.

Normally rugby is played with 15 players on each side, but Haz opted to go with a faster-paced game with only seven on a side. In 7s, the teams only play seven minute halves rather than the normal 40 minutes.

“[New Zealand] was faster pace, those girls definitely know how to play because they’ve been playing it since five years old,” Haz said. “That’s the difference between America and Canada – they have a ball in their hands from a year young age, and their parents played, their grandparents played, their siblings played. Everybody plays.”

After eight months in New Zealand, Haz felt it was time to play collegiate rugby. Haz previously conversed with Quinnipiac rugby head coach Becky Carlson over email and Skype, but it wasn’t financially feasible for her to enroll. Haz reached back out to Carlson, and they bonded quickly.

“We talked, and you could just tell that she was independent, and she was just one of those people who goes after whatever it is that she can tackle like she’s going to go after,” Carlson said. “I mean that figuratively and literally. She just had this persona where she was so together, and she answered every email and was so polite. Those things actually matter to a college coach. Her playing was secondary to how well she handled herself in the process of being recruited.”

Haz knew Quinnipiac was the school for her. It provided her with a balance between strong athletics and strong academics that cannot be mirrored in many other universities. She took notice of some Quinnipiac players – including All-American Ilona Maher – during a 7s tournament in Barbados.

“There were a few strong players that were playing on the Quinnipiac side,” Haz said. “Also, coach [Carlson] was recruiting another one of my friends to come here, but she didn’t end up coming. Overall, I knew about the accelerated dual degree program, and I knew that I wanted to go down the advertising/entrepreneurship/media studies type way. Everything seems really meant to be.”

With all the opportunities at Quinnipiac, Haz finds herself greatly busy. She is a 3+1 communications student on top of being a collegiate athlete.

“I’m running around a lot like a chicken with its head cut off,” Haz said. “It’s manageable. I think I’ve just had such a routine oriented lifestyle since I was younger, constantly running from sports to school that it’s kind of easy to simulate into college. I’m definitely used to it.”

Haz plays flyhalf for a young Quinnipiac squad that is coming off three-straight national championship titles. Losing key seniors set the team back, but that never stopped Haz from taking a leadership role. Carlson has been inspired by Haz’s work ethic and leadership qualities at such a young age.

“She’s intense and focused,” Carlson said. “As a coach, I need to be direct, be bright, and be gone, which means Mckenna doesn’t require a whole lot of peppering in the coaching. She’s more of a player that’s like, ‘Why use 15 words when five will do?’ She is processing exactly what you’re saying and she’ll go out and execute it. She will be direct and ask questions if she doesn’t understand something, but that’s not very often.”

Haz has naturally taken on the role of being a leader as the starting flyhalf, but she credits the seven other freshmen teammates for sticking together and being a strong unit where each player is a leader on the field.

Carlson has been impressed all season by Haz’s leadership, especially since she plays an extremely difficult position.

In addition to her academic and athletic activities, Haz has created and continues to run an organization called KidLED.

“My younger brother and I started it in grade 11,” Haz said. “Our mission is funding brighter futures. We create campaigns for charities and organizations. Our first campaign was in support of Wounded Warriors Canada.”

KidLED is designed to raise money to provide kids with a bright future in Leadership, Education and Development. Haz and her brother, Cooper, have recently partnered with Drumroaster Coffee for their newest campaign.

“We have seven sports teams signed up for our new coffee fundraising campaign,” Haz said. “We partnered with Drumroaster Coffee, it’s a local coffee shop. For every coffee bag a sports team sells, they make $5 on it.”

Throughout this busy season, Haz and the other seven freshmen progressed each day on and off the field. The team is 3-4 on the season with the playoffs nearing. Carlson knew this would be the case prior to the season.

“I had to take a huge step back before the season started,” Carlson said. “We didn’t drill into them like we previously had about championships, and we didn’t talk about a four-peat. We didn’t do any of that because we really had to fall in love with the process and kind of let go of the result.”

Carlson hopes for the team to return to its championship ways in the upcoming years as the freshmen mature. Carlson sees Haz as a leader among the rest of the freshmen, and believes success is in the future.

“[Haz’s] demeanor and energy was two of the most inspiring things,” Carlson said. “She also had a directness about her when she spoke and we when we would Skype. We chatted for a pretty long time, and I just got the sense that she was one of those athletes that would do anything to achieve that level of success.”