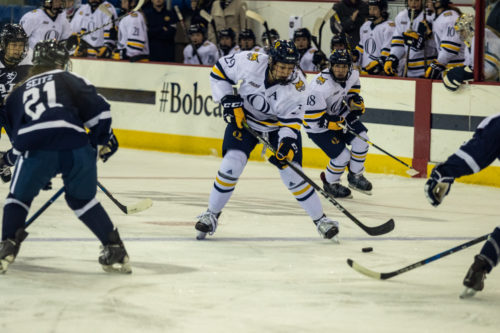 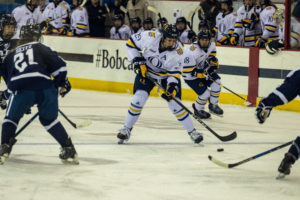 [/media-credit]After a poor start to the season, the Quinnipiac women’s ice hockey has won its past two games, this game a win on Saturday afternoon at Frank Perrotti, Jr. Arena, as the Yale Bulldogs were defeated 2-0.

This win also gave the Bobcats their second straight win in ECAC Hockey.

Quinnipiac head coach Cassandra Turner acknowledged a difference in the way that her team’s been playing two games, compared to how they started the season.

“I think we’re playing with a little more confidence than we were earlier in the season,” Turner said. “Our kids have a quote on the board on the locker room today just about believing. I think they believe in a different way now than they have done prior to the last two games.”

The first period was full of action. Both teams were pushing the pace of their offense and creating opportunities to score. It was Quinnipiac who broke open the game with a goal from senior forward Kenzie Lancaster, getting her first goal of the season, while giving the Bobcats the lead 1-0 with 12:12 in the first period.

Though she was not sure how the puck got in to the net, Lancaster knew the way she shot the puck, it was going to go in.

“I was trying to get my body in position to the inside and it turned out to be great,” Lancaster said.

The Bulldogs had their opportunities to score, with sophomore forward Laura Lundblad getting a penalty for holding at 9:01 in the first period and the amount of times they went on the breakaway. Despite the fact the Bulldogs were down one at the end of the first period, both teams had nine shots on goal.

Going into the third period, the Bobcats took the momentum from the second period and brought it with them. They were as aggressive as they were in the second period and did not look back. Eventually, their aggressive gameplan led them to another goal, this time from junior forward Kati Tabin, also getting her first goal of the season and giving the Bobcats a comfortable lead with 15:36 remaining in the third period.

Tabin talked about her first goal of the season and how it felt that it went in at that moment.

From that point in the third period, the Bobcats defense dominated the rest of the game, only allowing four shots on goal.

In the end, it was the defense that really came to play today, pointed out Tabin.

“We really focused on defense today, with preventing shots and not allowing anything to get behind us,” Tabin said. “I think we took a step in the right direction these past two weeks and we just have to build from here.”

The Bobcats look to move their winning streak to three games as they play the Harvard Crimson on Friday, Nov. 2 at 6 p.m. at the Frank Perrotti, Jr. Arena.