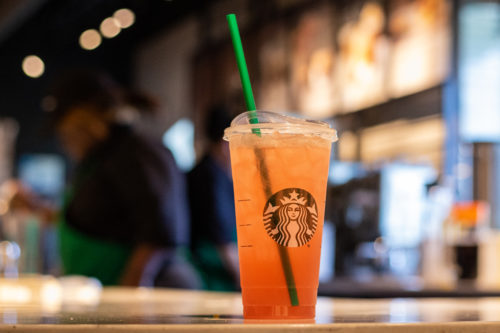 This past summer, Starbucks has announced its transition to using eco-friendly plastic lids instead of its typical green straws along with the flat lid. However, some Quinnipiac students are having a hard time committing to the new change and are still using straws.

“Many students ask for straws even though our kids are updated to not need straws,” Radiant, an employee at Starbucks at Quinnipiac said. 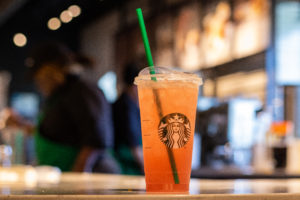 [/media-credit]This began in July 2018 with lids just recently making an appearance at Quinnipiac. Starbucks estimates this change will help to eliminate more than 1 billion plastic straws per year, according to the Starbucks website.

Quinnipiac Dining recently received an email from Starbucks about the new plastic lids.

“Starbucks is committing to eliminating plastic straws from our stores by 2020,” the email from Starbucks to Quinnipiac Dining read. “As part of our ongoing commitments to promote environmental sustainability through waste reductions and recycling in our stores. To do this, we will be offering the Starbucks exclusive strawless lid, which is currently the nitro/cold lid, in place of straws for most cold beverages.”

Soon after, the Starbucks at Quinnipiac began using the plastic lids. Despite the new plastic lids, there is still a container of straws available to students to take if they want one.

On the other hand, some students are confused, thinking that the straws were supposed to be eliminated completely.

“I’m all for saving the environment I love the turtles, but I think I’m gonna invest in a reusable straw because I can’t walk and drink at the same time without spilling on myself, but I think that’s more of a me problem than a lid problem. So all in all I’m down for the lids if it helps with the environment,” freshman biology major Alyssa Nelson said.

Students really do believe getting rid of the straws will save the environment and be better for Quinnipiac. “I feel like it’s easier to drink now and it’s better for the environment- a win win for me and my PSL,” freshman communications major Shannon Flaherty said.

Although students have mixed reactions, Starbucks is sticking to going environmentally friendly.

“Starbucks estimates this change will help to eliminate more than 1 billion plastic straws globally per year, most of which ends up in landfills and the ocean,” according to Forbes website.

Starbucks will be making other changes in their U.S stores as well. “Starbucks invested in a $10 million NextGen Cup challenge, which seeks to develop a fully recyclable and compostable hot cup,” according to the Quinnipiac  Sustainability club’s Instagram. “Starbucks is also encouraging customers to BYOT- bring your own tumbler- as part of its efforts to reduce waste. In 2014 Starbucks began selling a $1 reusable cup in the U.S.”

This is a big deal for the animals living in the sea, according to an article by Forbes.

“The impact on sea life has been immense. Research has found that 70 percent of seabirds and 30 percent of sea turtles have some amount of plastic in their systems,” according to NBC news, official website.

Not only do straws affect marine life in the ocean, but other animals as well.

“It can take between 500-700 years for most plastics to decompose, so they remain in the environment for a very long time if not properly disposed of,” Quinnipiac professor of earth science Marta Clepper said. “They can be harmful to animals that may try to eat them and as they decompose, they release possibly dangerous chemicals into the environment since most plastics are made from petrochemicals (A chemical obtained from petroleum and natural gas).”

With just Starbucks eliminating its straws, there will be a huge impact on the environment and even in the seafood we eat.

“Plastic straws increase the presence of microplastics in landfills and oceans,” according to Forbes. “Both straws and the broken-down microplastics are ingested by marine life, ending up in our seafood and harming marine ecosystems.”

This will also have an effect on the Quinnipiac environment.

“I do think that the Quinnipiac community could benefit from not having straws, or any single-use plastics for that matter,” Clepper said. I think that understanding the impact of single-use plastics, and understanding that they are not really needed in our lives, will teach students how to do things differently when it comes to the things that we use in our lives and the impact that they have on the environment.”

A big issue is also that single use straws are not recycled, they are thrown out with the rest of the drink causing the pollution in general.

“Eliminating single-use straws will be beneficial to the environment because there would be less plastic getting into the environment and less plastics going into landfills as well,” Clepper said. “Unfortunately, most single-use plastic products are not recycled, so they just add to the overwhelming amount of materials that are being disposed of and are filling up our landfills.”

According to Clepper, many people believe the elimination of the Starbucks straws will just affect the environment, but it will also affect our world economically, having less toxic trash will help spend less money on trying to clean up all of this waste.

“People need to understand that there is not only an environmental impact of properly disposing of these items, but there is also an economic one, Clepper said. “Eliminating the amount of trash caused by single-use plastics can save money as well as the environment.”

For all of the straw lovers out there, there will be an alternative option coming out soon instead of the new lids.

“Starbucks will begin offering straws made from alternative materials – including paper or compostable plastic–for Frappuccino® blended beverages, and available by request for customers who prefer or need a straw,” according to Starbucks, official site.

“Hopefully students can learn that while many of the plastic items that we use in our daily lives may be convenient in the short term, they are very harmful to the world we live in in the long term,” Clepper said.