Will ‘First Man’ place first at the box office? 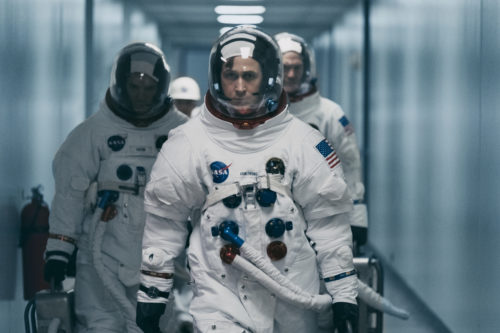 Oscar season is almost here, and likely to be in contention for many awards is Damien Chazelle’s third big-screen directorial effort, “First Man.” “First Man” is the story of Neil Armstrong in the many years leading up to his world-famous voyage to the moon. Where “First Man” will surprise most is in its content, choosing to focus heavily on Armstrong’s family and his relationship with his wife, Janet. 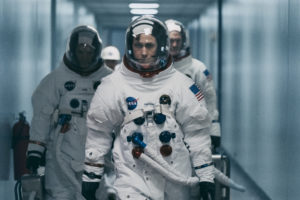 [/media-credit]Ryan Gosling takes on the titular “First Man”, making this his second time working with Chazelle since 2016’s “La La Land.” The film boasts an extremely impressive cast starring Claire Foy, Corey Stoll, Kyle Chandler and Jason Clarke. Gosling plays a stoic, intellectual character who always tries to remain calm, and his performance is consistent and well earned throughout the runtime. Claire Foy shines as Janet Armstrong, giving an understandably emotional performance, as the space race put the Armstrong’s marriage to a real test. Stoll is delightful as Buzz Aldrin, but unfortunately, I believe his character is underutilized.

“First Man” follows the eight years leading up to the moon landing, and it portrays all the trial and error that NASA went through to try to reach the moon. As stated earlier, the film focuses heavily on Neil Armstrong’s family dynamic and tragedies he endured as a father, and it really deals with the emotional weight that such a dangerous mission would drop on someone.

“This was a man who I think was forged through failure and through loss” said Chazelle in an interview with Flickering Myth. “He was not this sort of born icon, he was not necessarily this sort of born American hero from the outside.” Gosling’s performance conveys an enormous amount of emotion despite his character’s few lines.

The perspective of “First Man” is told almost entirely through those involved with NASA, and fails to capture the cultural significance of the space race in the sixties. Oddly enough, the film underplays the magnitude of travelling such a long distance, while the focus lies on the sheer difficulty of the mission. That being said, every sequence involving an aircraft is both spectically satisfying and nail-biting. On the ground, the film montages over most of the extremely in-detail planning to pull off a feat like this and dialogue is used to push the story forward.

“Shaky Cam” techniques are utilized extremely effectively in scenes where characters are flying in the aforementioned aircraft sequences, where the turbulence feels real and intense. Oddly enough, shaky cam sticks around for the entire movie, where the vast majority of shots are handheld and shaky. This technique is most commonly used to convey a sense of nervousness or uneasiness, however Chazelle seems to use this technique in almost every second of the film. This is a strange choice for such a renowned director, and it bothered me as a film fan, impacting my enjoyment, because I found it gimmicky and unnessecary

After “Whiplash” and “La La Land,” it’s to be expected that a Chazelle film would have a great score composed by Justin Hurwitz, “First Man” didn’t disappoint. Hurwitz’s score captures a distinct sense of urgency and emotion, almost better than the actual film does.

“There was no margin of error,” Hurwitz said in an interview with Indiewire.

Hurwitz wanted to compose a score that both created a sense of spectacle and emotion according to the same interview. He finished mixing the score within days of its release at the 2018 Venice Film Festival. Though this is Chazelle’s first major project without music being essential to the plot, it’s still a very big part of the film.

“First Man” is a fine movie with untapped potential. I would say it’s worth seeing in theaters for its breathtaking outer space sequences. Unfortunately, the film does not live up to its full potential and seems to understate the cultural and historical importance of the events of July 21, 1969. Performances by Gosling and Foy grant the film some of its much needed depth, and they almost make up for the fact that the camera was never steady on set, but the lack of a portrayal of the space race really brought the film down. Chazelle established a name for himself four years ago, and though it’s the weakest thus far, it’s still worth your ticket.