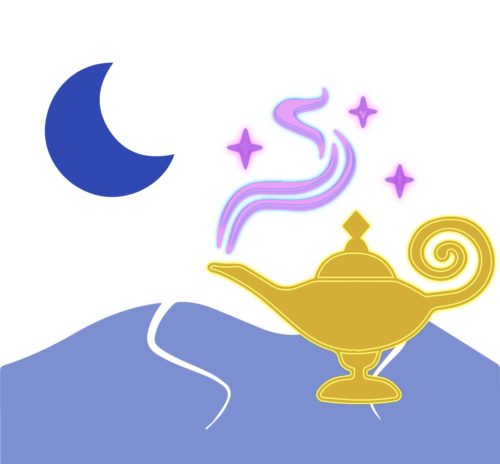 The magical kingdom of the beloved Disney film “Aladdin” is being reimagined in Guy Ritchie’s upcoming live-action film of this classic movie. The teaser trailer was dropped all over the internet on Thursday, Oct. 11, just a day after Will Smith, who is playing the Genie, posted the first movie poster that featured the Genie’s magical gold lamp.

The teaser trailer included the scene when Aladdin, played by Mena Massoud, finds the Genie’s magical lamp that will soon grant him wishes from the Genie himself. Right before when Aladdin grabs the lamp, a menacing voice refers to Aladdin as, “a diamond in the rough.”

According to Disney, the remake is going to follow the basic plotline of the original animated movie that premiered in 1992. The trailer not only shows a brief glimpse of the lamp and Aladdin, it also shows Agrabah and the Cave of Wonders. Right when Aladdin appears, the trailer is over before showing Jasmine, who is played by Naomi Scott, and Smith decked out in blue playing the Genie. It was a true tease.

Disney announced the live action version of this movie back in 2016, saying it was in the works. However, film production was pushed back several months in 2017 when the director, who was searching for just the right actors to play Aladdin and Princess Jasmine, took more time than expected. In 2018, Disney faced criticism when reports came out that it was using brown face paint to blend extra actors into the background during specific scenes.

“Diversity of our cast and background performers was a requirement and only in a handful of instances when it was a matter of specialty skills, safety and control (special effects rigs, stunt performers and handling of animals) were crew made up to blend in,” Disney said according to BBC.

Alongside Massoud, Smith and Scott in the film, stars such as Billy Magnussen (Prince Anders), Nasim Pedrad (Dalia) and Marwan Kenzari (Jafar) will be a part of the cast.

Even with the hype that this new remake is giving to fans around the world, not everyone is so happy. A screenwriter of the original 1992 film, Terry Rossio, is showing his distaste for the lack of recognition the original writers received from Disney when the remake was made. In the trailer, the dialogue used was  written by Rossio and his partner.

“So strange that literally the only words spoken in the new Aladdin trailer happens to be a rhyme that my partner and I wrote,” Rossio said on Twitter. “Disney offers zero compensation to us (or to any screenwriters on any of these live-action remakes) not even a t-shirt or pass to the park.”

Even though the new film of “Aladdin” is based off of the original film and is using dialogue from it, Disney retains all rights to this version of the film, so compensating the original writers is not contractually required by the company. However, years ago, when the animated “Aladdin” movie came out, Disney did grant Rossio and the other screen writers lifetime passes to the Disney theme park, but took away this gift later on.

“Aladdin” is not the only Disney film that is being remade as a live-action or even hybrid live-action movie since these remakes have now become a huge part of Disney’s strategy for making new movies. Past remakes, like “Cinderella” and “Beauty and the Beast” have proven to be very successful financially for Disney therefore the company wants to continue doing well and feeding into fans’ desire to watch their favorite classic movies on the big screen in a new way. In the next year, there will be three live-action remakes heading to theaters, one of which is “Aladdin.” Tim Burton’s “Dumbo” and Jon Favreau’s “The Lion King” will be accompanying “Aladdin” a few months after onto the big screen.