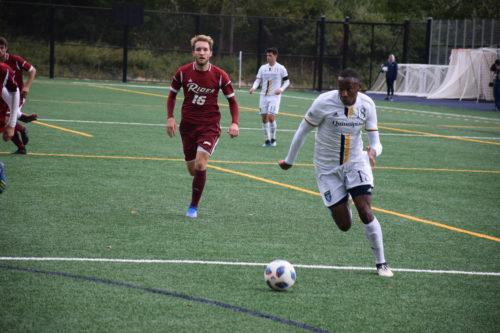 It was another tight game for the Quinnipiac men’s soccer team as junior forward Eamon Whelan scored two late goals to give the Bobcats the 2-1 victory over MAAC rival Rider University on Wednesday afternoon at the Quinnipiac Soccer Stadium.

The first half started off slow for the Bobcats. Rider had the majority of the possession to begin and was able to keep the ball in its offensive half. Though the stats had the game in the favor of Quinnipiac with shots 4-3, Rider certainly had control overall. Rider’s passes were cleaner and the team was able to intercept many of Quinnipiac’s. 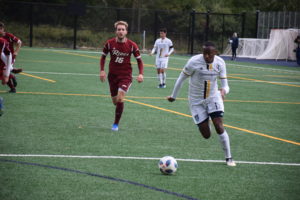 [/media-credit]Whelan, Quinnipiac’s team leader in all offensive categories, did not start the game and was substituted in the 32nd minute of the first half and changed the dynamic of the game for the rest of the half.

“We knew Rider was a bit more physical than other teams that we’ve played and Salah (Oumorou) has a bit more to him,” Quinnipiac coach Eric Da Costa said. “We know what Eamon is capable of, but splitting time between the two of them today was the right call given the team that we were playing.”

When Whelan stepped on to the field, the play seemed to shift in favor of Quinnipiac. There was almost an energy that he brought onto the field with him.

Both teams went into halftime with no goals and only one shot on target.

Quinnipiac started off the second half almost opposite of how they started the first with two promising shots in the first five minutes. Possession spent the majority of the half in the midfield or in the Bobcats’ offensive half. The Bobcats were completing passes, had successful crosses and were making cleaner plays, but still couldn’t find a way to put the ball in the back of the net.

Just as things seemed to be going Quinnipiac’s way, Rider forward Aaron Robinson was able to lob a ball just above Quinnipiac junior goalkeeper Chrys Iakovidis and into the net for the first goal of the game in the 61st minute.

Quinnipiac was not ready to give up after falling behind and only a few minutes later had a chance at a possible goal-scoring opportunity with a through ball to senior forward Rashawn Dally, but he was called offside.

The Bobcats started to play a more high-press game after going down a goal. Whelan was put back in the game with some other fresh legs in players like junior and sophomore midfielders Romain Daniellou and Bruno Aguillon in hopes to tie the game.

In the 72nd minute, it was Whelan against the goalie, but his shot went high above the crossbar. It was Quinnipiac’s best chance at a goal all day, and it was a game-changer. After that attempt, the Bobcats got the push they needed to continue the game.

“It was a great team performance and everyone on the field was making a difference,” Whelan said.

Whelan must have not been content with only a tie because in the last minute of play, the forward scored his 10th goal of the season off of a rebounded shot. Junior defenseman Jeppe Haehre had a beautiful cross into the center of the box where Dally was waiting. Dally then flicked the ball to Whelan who headed the pass Rider’s keeper.

The game-winning goal is his fourth of the season.

“Doesn’t everybody dream of it?” Whelan said jokingly about scoring the game-winner. “I mean my teammates put the ball where it needs to be and I just happen to be there.”

The Bobcats are now 5-1-0 in the MAAC and their next game is on Saturday, Oct. 20, when they take on Fairfield University in Fairfield, Connecticut with kick off at 7 p.m.