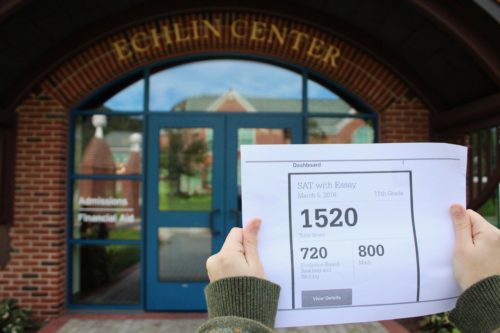 Applying to Quinnipiac will now be a little cheaper and a lot simpler due to a recent change in policy. The university will begin allowing prospective students to self-report standardized test scores rather than sending official score reports. 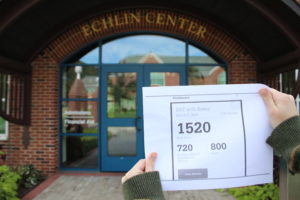 [/media-credit]The change will allow students to type their scores into the Common Application as an entry instead of sending them separately.

Greg Eichhorn, vice president of admissions at Quinnipiac, said the goal of the change was to make the application process simpler and faster for students so they will be able to get decisions earlier.

“I just think it’s going to be easier for students to apply,” Eichhorn said. “It’s going to make it quicker in a number of cases, so they’re not going to have to wait to have test scores released. In some instances, they’ll save some money.”

The new policy, which was trialed during the spring 2018 semester, was officially enacted this August for the Class of 2023 applicants. It allows students to self-report scores on the Scholastic Aptitude Test (SAT) and ACT which previously had to be submitted through the College Board or the ACT website for a $12 fee. Additionally, it used to take about three weeks to process the scores.

The policy, Eichhorn said, was not as much about saving money as it was about ensuring that students who want to apply can get their scores in before the deadline.

Quinnipiac’s decision to accept self-reported scores is not an uncommon one. Schools across the country are gradually adopting this policy, including Yale, who ran a pilot program this summer.

“The problem I think schools are seeing more and more is that they’re seeing students not able to complete their application, because they’re waiting on test scores to be released from testing agencies,” Eichhorn said.

Freshman nursing major Mary Vidallon, thinks the policy has the potential to be beneficial, but also could lead to dishonesty.

“I think that the new policy, while helpful, can be easily exploited,” Vidallon said. “In competitive programs where SAT or ACT scores are required like PA, scores can be manipulated.”

Eichhorn acknowledged that a common concern is how they will check and see if students are telling the truth about their scores. He said that Quinnipiac will verify the scores once the student has committed to Quinnipiac. Eichhorn said he is confident that the majority of scores will be reported honestly.

“The national research on it is that 97.3 percent of students indicated accurately,” Eichhorn said, referring to other schools who already have instituted this policy. “The majority that were incorrect, actually lowballed their scores.”

Eichhorn said this is because students often take the SATs numerous times, and the score they report can end up being lower than a subsequent score. Eichhorn said this problem can be resolved by allowing students to email screenshots to Quinnipiac with more updated scores.

If after verifying the scores for the admitted students, Quinnipiac admissions discovers a student who reported an artificially inflated score, there will be consequences.

“The fear is it will happen at some point,” Eichhorn said. “Somebody will self-report test scores that are different, that will change their admission decision or their scholarship and that’s going to be the tough part.”

While Eichhorn is confident in the integrity of college applicants, freshman occupational therapy major Sarah Bugbee has mixed feelings about the new policy.

“Kids could potentially lie about the scores,” said Bugbee, whose class was the last one to have to send official score reports. “But it will also increase the number of applicants which could make the acceptance rate lower overall.”

Eichhorn said that this change could continue to help Quinnipiac grow as an academically strong university, but did not mention a lower acceptance rate as a result.

Many programs and majors at Quinnipiac are currently test optional. Eichhorn believes the expedited score reporting process could encourage more students to report scores, even when they are not required.

“My guess is that they’ll be a slightly higher percentage of students that submit test scores in this year’s applicant pool than there was last year,” Eichhorn said.

Glastonbury High School senior from Glastonbury, Connecticut, Madilyn Rafferty, is considering applying to Quinnipiac. After learning about the new policy, she thought it was a good idea.

“I think it would be beneficial to send in SAT scores without having to pay,” Rafferty said. “It could get more people to send them into schools that are test optional.”

“Tests are part of our process,” Eichhorn said. “But grades and performance and strength of curriculum and strength of high school would be the best indicator of how our students are going to do in college.”

Bugbee believes there are larger burdens placed on students than paying the $12 to send scores. She thinks waiving the application fee would have a larger impact on students.

“The application fee is a bigger fee that would be more beneficial to students who find the costs associated with colleges applications to be difficult,” Bugbee said.

“Having no application fee generates a lot of what I would call soft applicants,” Eichhorn said. “You want them to show some sort of interest and not just make it a completely easy process.”

This week, Quinnipiac’s new policy was mentioned in numerous articles in major press outlets including The Washington Post and the Associated Press. Eichhorn is excited about the attention the announcement is getting because he believes it is a positive change for the admissions process.

According to Eichhorn, students who have already applied to Quinnipiac for the Class of 2023 have reported test scores that have verified at 100 percent.