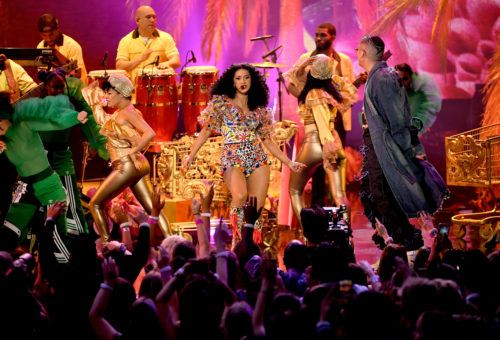 If Nielsen ratings are any indicator, you probably missed the AMAs.

ABC’s broadcast of the storied American Music Awards took a remarkable tumble in viewership this year, marking a 28 percent dip. 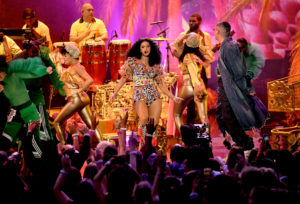 [/media-credit]And by the sounds of it, Quinnipiac students were part of that drop– echoing each other closely when prompted with “Did you watch the AMAs?”“I did not,” freshman finance major Ricky Keller said.

“What even is the AMAs?” asked freshman finance major Ryan Heng.

Despite what the numbers and QU students may say, last Tuesday’s show was a star-studded spectacle, showcasing a wide range of musicians and performances.

Taylor Swift provided the show opener, performing her latest single off her “Reputation” album, “I Did Something Bad.”

In typical Swift fashion, her showing was theatrical and intricate, featuring digitally generated flames, a troupe of dancers and her single’s explosive chorus.

Tuesday proved to be a big night for the 28-year-old pop star; she took home four awards, thus becoming the most decorated female American Music Award holder, with 23 wins. That record was previously held by Whitney Houston, who holds 21.

This year’s show also marked an important moment for one of the music industry’s biggest rivalries; it was one of the rare times that Jennifer Lopez and Mariah Carey performed at the same event.

Carey was up first, offering a dramatic rendition of her latest single, “With You.” Decked out in an elegant, skin tight gown, she wowed the crowd when what had to be a dozen dancers appeared from under her dress mid-song.

She is currently promoting her upcoming album, “Caution,” set to be released on Nov. 16.

Meanwhile, Lopez brought the heat with her latest and greatest– debuting “Limitless.” Written by Sia, the track fits seamlessly into Jenny from the Block’s discography, and is set to be featured on the soundtrack in the upcoming comedy movie, “Second Act.”

The list goes on. Cardi B did what she does best; rile up the crowd with her larger than life persona and attitude. This time, she used her Bad Bunny and J Balvin assisted track, “I Like It” to deliver her signature sound.

Meanwhile, Shawn Mendes was joined by Zedd to promote his most recent song from his eponymous third album, “Lost in Japan.”

Closing the show with a bang, the legendary Gladys Knight honored Aretha Franklin alongside a myriad of gospel singers– each bringing the chops critical in handling the intense vocal pyrotechnics of Franklin’s greatest hits. “Respect” and “You Make Me Feel” (Like a Natural Woman) were represented, among several others.

With so many adored musicians represented, it’s hard to imagine why the broadcast is seeing staggering ratings.

But the AMAs are certainly not the first to see this drop in viewers. The VMAs, Emmys, Oscars and Grammys are all experiencing a similar decline– leaving network bosses and media experts alike scrambling for a solution to the sinking numbers.

“There’s a lot of people who are looking at why we’re seeing such a decline in viewership,” QU media studies professor Kearston Wesner explains. “And there’s several theories.”

One of those theories, as Wesner explains, has to do with the new ways people have come to enjoy watching TV– namely binge watching, which emphasizes little to no commercials and casual viewing.

“I think there’s less of a desire to see this as a big event and gather around for and watch now,” Wesner said. “I would hinge that on how differently we experience media in general. I think when you have a binge watching culture, it doesn’t necessarily lend itself to watching award shows in the same way.”

Streaming services aren’t the only thing networks are battling for viewers’ attention.

“You can follow along without having to watch– online and see what people are posting about,” Wesner said. “You’re not just competing with other networks. You’re competing with the computer.”

And that, Wesner says, is one of the most difficult things to compete with.

As to how the future looks for these types of awards shows, the media studies professor says something has to change in order “to make it more interesting and relevant for people to watch now.”

All eyes will certainly be the 2019 Golden Globes, set for Jan. 6, to see if they are able to accomplish that.

But until then, enjoy the AMA highlight reels on YouTube.