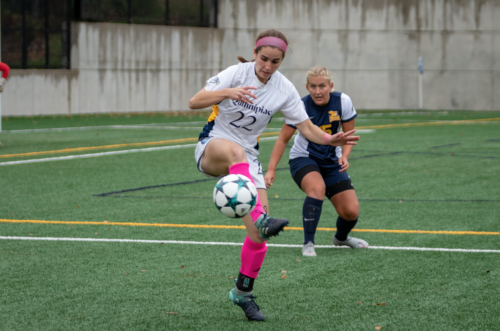 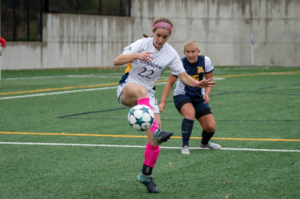 [/media-credit]The Quinnipiac women’s soccer team came out of Saturday’s matchup against the Canisius Griffins’ with a draw. Despite an all-around dominant performance by the Bobcats, the final score was 1-1.

This is the second time this season that Quinnipiac has finished a game in a draw, its record now reading 6-6-2 after the game. This draw, however, was an incredibly frustrating result to swallow.

In the opening minute of the game, the Bobcats had the first of their 28 opportunities to put the ball in the net. After some nifty footwork and a cross, senior forward Al Pelletier found the ball at her feet. She took a shot on net, only to have it saved by Griffins’ junior goalkeeper Alana Rossi. After the save the ball fell to junior forward Ally Grunstein’s feet inside of the 18 yard box, but her shot sailed over the net and the Bobcats walked away empty handed from their early opportunities.

“If Al puts that away or Kelsey buries it, you know, and it’s in the back of the net, you’re up one nil after a minute,” Bobcats head coach Dave Clarke said. “It’s a whole other game.”

The opportunities to jump out to a lead didn’t end there for Quinnipiac. Twelve shots in the first half amounted to zero goals for the Bobcats as they failed to capitalize on any of their early chances.

“That’s three games where we should be up 1-0 in the first 90 seconds, and the games totally change after that,” Clarke said. “Hopefully that’s a lesson learned, but we’ve got to stop trying to learn these lessons and we’ve got to actually implement what we’ve learned. I think that’s the final step for some of the players.”

The Griffins’, on the other hand, took advantage of their few opportunities in the first half. Despite taking only two shots in the opening frame, they finished on one and entered the second half with a 1-0 lead.

The second half was reminiscent of the first — the Bobcats outshot the Griffins 10-1. With the ball rarely leaving Canisius’ half of the field, the Bobcats seemed on the verge of scoring all half, but again struggled to do so.

Finally, though, they broke through and put one of their many shots in the back of the net. After two scores that were called back because of offsides calls, Quinnipiac finally got one the right way. After a free kick was deflected by a Canisius defender, the ball quickly found its way back into Bobcat possession. A cross that was played to the middle of the six yard box by freshman midfielder Lauren Wendland and sophomore forward Kelsey Goldring was sent into the back of the net off the right foot of freshman midfielder Selena Salas.

That would prove to be the final goal of the game as neither team could make good of their remaining shots on net. After 110 minutes and two overtime periods, the teams walked away from their draw feeling opposing emotions towards the game.

“It has to come from them,” Clarke said of his players. “They’ve had all the tools, they know what to do. It showed just the way they played, all of their shots. Some of the final deliveries…they weren’t quite there, but eventually that will come back.”

With only three games left on the regular season schedule, the Bobcats will need to get “that” back sooner rather than later.

Hoping to play its way into the postseason, Quinnipiac looks to take down the Rider Broncs on the road this Wednesday, Oct. 17 at 7 p.m.