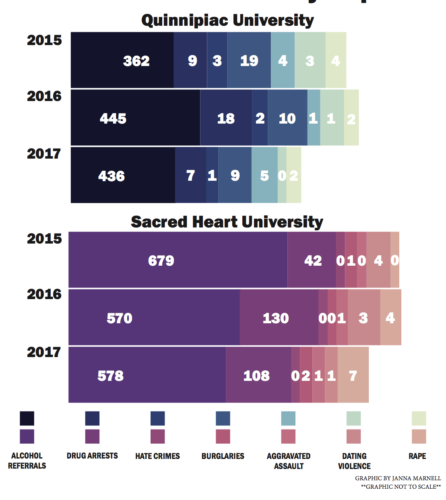 “In compliance with the Jeanne Clery Act, the university has published its annual security and fire safety report,” according to the email. “The university publishes one report for the Mount Carmel and York Hill campuses and a separate report for the North Haven Campus.”

The university’s annual security and fire safety reports provides a list of all documented criminal activity committed by members of the student body among the Mount Carmel, York Hill and North Haven campuses between 2015 to 2017. 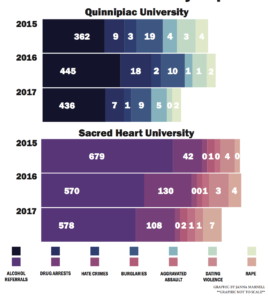 [/media-credit]The Clery Act is a consumer protection law that aims to provide transparency around campus crime policy and statistics, according to clerycenter.org. The law was first issued in 1990 after the Crime Awareness and Campus Security Act of 1990 was established. The title for the Clery Act was named after Jeanne Clery, a college student who was raped and murdered in her residence hall in 1986.

The full security reports can be found on the official university website under university policies. If interested in receiving a hard copy, the email said to contact Karoline Keith, clery compliance officer, to get one.

The reports reveal that most of the criminal activity committed took place on the Mount Carmel campus, but none were located on the North Haven campus. Most of the offenses have shown to decrease in number throughout the past year.

One of the more noticable differences, is the report of crimes that go against the Violence Aganist Women Act (VAWA), as there have been no reports of dating violence last year. Between 2015 and 2016, a total of seven cases of dating violence were reported, with five of those cases occurring on the Mount Carmel campus.

Other offenses listed included aggravated assault, which had a slight rise in number. There were five reported cases last year, four of them happening on the Mount Carmel campus and one on the York Hill campus, whereas only one incident was recorded in 2016 and four in 2015.

Burglary has an even higher amount, with 19 cases in 2015. One of those cases took place at a non-campus building or property which was defined back in 2015 as a university-owned or leased house occupied by students. The amount of burglaries has decreased over time though, as the report shows 10 cases reported in 2016 between the Mount Carmel and York Hill campus and nine in 2017 solely taking place on the Mount Carmel campus .

There is also a section referring to reported hate crimes on campus. This calls attention to crimes such as intimidation of race or sexual orientation, vandalism of religion and assault on religion or race. The report shows there were three cases of hate crimes in 2015, two in 2016 and one in 2017. All of these cases occurred on the Mount Carmel campus.

The majority of these crimes have decreased in number over time which contrasts against the security and fire safety reports released by Sacred Heart University, which shows an increase in most of the criminal activity on that campus.

At Sacred Heart University, there has been an increase of dating violence, having a total of four reported cases last year, following up with three in 2016 and one in 2015. There has also been an increase in the numbers of reported rapes, from an original report of zero in 2015 to four in 2016 to seven last year.

There were no reports of aggravated assault at Sacred Heart University in 2015, but there was one case each in 2016 and 2017. Burglary is also low compared to other crimes, with one act committed in 2015, none in 2016 and two last year.

In Sacred Heart University’s reports, there is no section that specifically shows the numbers of drug arrests on their campus. However, the amount of drug law violations that are listed under judicial referrals states that 42 were reported in 2015, 130 in 2016, and 108 last year.

The only section in the report that shows absolutely no reports of crime in the past three years are hate crimes. This includes every category of hate crime listed in Sacred Heart University’s report, including hate against race, gender, religion, sexual orientation, ethnicity and disability.

In case of an emergency pertaining to any of these crimes or more, students at Quinnipiac University can contact 911 from any telephone on campus, according to a statement on the official university website. Students can also contact the public safety office phone for non-emergencies at (203) 582-6200 or email at [email protected]