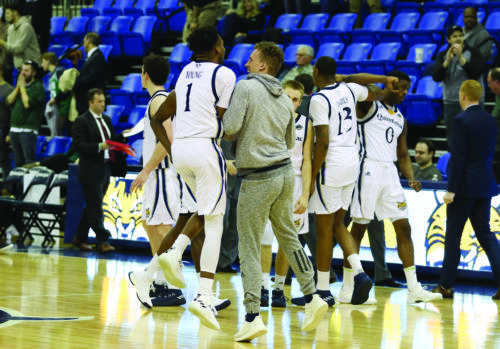 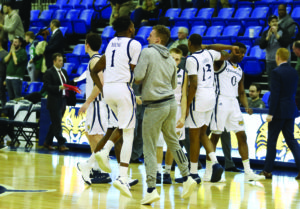 [/media-credit]You’re a college student. Imagine having to go to class and do all of your school work each week, only to be told you can’t go out with friends on the weekend.

That’s somewhat similar to the situation college basketball players deal with when they decide to transfer schools.

There’s no NCAA rule about them staying in on weekends, but there is one that says players who transfer are ineligible to play in games for one year while still being able to fully practice with the team. So, the players are going through the daily grind of practices and workouts, but aren’t able to go out on the court with their teammates and play the games.

Last year, now-juniors Travis Atson and Kevin Marfo were both stuck in this situation for the Quinnipiac men’s basketball team. Atson, a transfer from Tulsa, and Marfo, a transfer from George Washington, had very different experiences in their year away from game action, though.

One week into practice last October, Atson suffered a torn ACL in his knee, an injury that generally takes at least six-to-nine months to fully heal. Suddenly, his season of no game action turned into a season of no basketball at all.

“I officially came back when summer practices started,” Atson said. “I’ve just been grinding all summer, getting back into things. It feels great. It’s been a long time sitting out all year just rehabbing, so now getting back into it feels amazing.”

Unlike most athletes, Atson is not wearing a brace on his knee now that he’s back in action. One year after a devastating injury, the 6-foot-5 guard is a full participant at practice. 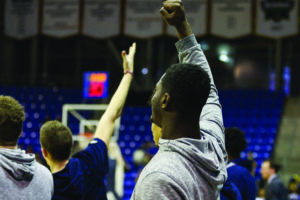 [/media-credit]Marfo, on the other hand, practiced all throughout last season. Even though all of his teammates got to go out into battle and he was forced to sit back and watch, the 6-foot-8 forward didn’t really see a difference.

“It’s pretty much the same mindset, to be honest,” Marfo said. “Last year, practice was usually like my games, so I tried to go as hard as I could. You obviously have your good days and your bad days, but hopefully it’s consistent this year. It’s no difference for me [at practice this year], it’s just now I’m playing. It’s still the same mentally.”

Atson echoed Marfo’s statement, despite the fact that he was only able to practice for a week last season.

“It feels a little different [knowing I’m going to play],” Atson said. “But we still come with the same mindset – play hard every day and just do what we have to do.”

Players that are forced to sit out the season can’t really be used in full capacity in practice because there’s no reason to play them over guys that are eligible. Because of that, their coach thinks practice this year will be just a bit different.

“There’s naturally going to be a little bit more of a purpose toward some of the intricacies of what we’re doing because they can play,” Quinnipiac head coach Baker Dunleavy said. “A lot of their responsibilities last year were to be more scout team just because they couldn’t play. But all along they were picking up our core values, our principles.

“Both of those guys are coming back, maybe not with the experience of a guy who played last year, but they’re certainly not like newcomers. They know what we’re doing.”

Atson and Marfo are likely to play key roles for the Bobcats this season. Both transferred from schools in larger conferences (American Athletic Conference and Atlantic 10 Conference, respectively) and were key contributors in their freshman season before making the move.

“I’m trying to play whatever coach needs me to play,” Atson said. “Whatever he asks me, I’m going to try to do it.”

Last season, Dunleavy didn’t have the personnel to fully employ his four-guard system. He tried, but overall the Bobcats weren’t deep enough to do it as much as the then-rookie head coach would’ve liked.

“We have some smaller guards, but we also have some bigger guards with Travis being one of them,” Dunleavy said. “Those guys just have to play big, they have to rebound. I think our fives in [Abdulai Bundu] and Kevin Marfo are two of the best rebounders in the our league. They’ll eat up rebounds, but then guys like Travis, Cam Young, the Robinson’s are bigger guards – those guys will have to do it.

“It’s going to be a committee-type thing – something we’re all going to have to be committed to.”

With such a guard-heavy roster, Marfo is in store for significant minutes as one of the two bigs on the team.

“We all got a job,” Marfo said bluntly. “Everyone has a different role. I just have to do what they tell me to do. The coaches know what’s best so we just have to listen to them and pretty much just go from there.”

Aside from the Xs and Os on the court, these two are just grateful to finally take the court with their teammates again.

“When you have something you love so much like basketball taken away from you for two years, you start to really appreciate and value it,” Marfo said. “[I’m] more appreciative that I get to play again. This is what I love. Any time I have the opportunity to do something I love, it’s an amazing feeling.”