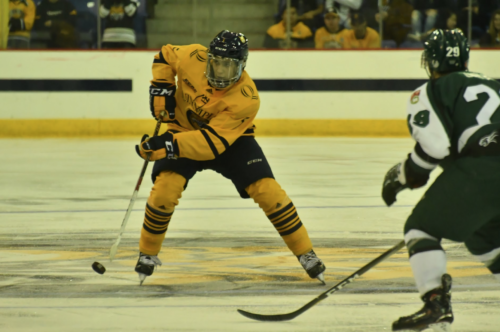 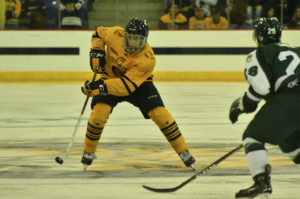 [/media-credit]The Quinnipiac Bobcats men’s ice hockey team went up against the University of Prince Edward Island (UPEI) Panthers for their first exhibition game on Saturday at home as the Bobcats won by a score of 5-2.

“It was a good win tonight,” Quinnipiac head coach Rand Pecknold said. “I thought our compete level was good. We weren’t perfect…we had some issues at times, [we] battled and found a way to win.”

The Bobcats found a way to win in a big way as they outshot the Panthers, 37-17. The pace of play was on the Bobcats side as well, seeming as though the team always controlled the puck and kept it away from the Panthers, negating them from gaining any momentum throughout.

Also, the Bobcats had nine power play opportunities. However, the team was only able to put it in the back of the net on one of those chances when senior left wing Craig Martin scored with one minute and 36 seconds off the clock in the third period to make the score 3-1.

“Like our power plays we were lights out in practice,” Pecknold said. “Tonight we couldn’t make a pass. Pucks were bouncing all over the place…we got a little nervous”

However, the Bobcats are a very young team with about half the team being made up of freshman. A freshman that did step up was forward Desi Burgart, who had two assists and the highest plus/minus on the night.

“I just want to contribute in any way I can,” Burgart said. “Today i was put on the penalty kill and that is something i take pride in.”

For the young team to step up, the upperclassmen have to help the freshman mature. Senior forward Scott Davidson, who had one goal on the night, as well as an assist to junior forward Alex Whelan to make the score 4-1, was asked how he is helping the young guys be brought up to speed.

“All the seniors and juniors are taking care of them, showing them the ropes,” Davidson said. “We have done a good job, have a few things to clean up but besides that everyone’s on board”.

Besides those three previous goals, the two other Bobcats to score were junior forward Nick Jermain to tie the game up 1-1 in the first period, as well as senior defenseman Brandon Fortunato to take the lead on the Panthers in the second period 2-1.

Quinnipiac’s next game will be its first regular season game as the Bobcats will play at Vermont on Oct. 13 at 7 p.m.