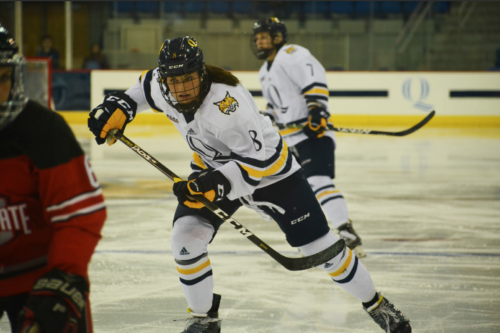 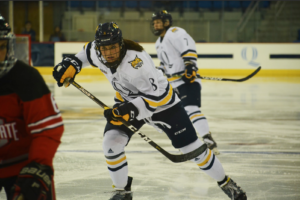 [/media-credit]The Quinnipiac women’s ice hockey team (0-2) was defeated by No. 7 Ohio State (2-0), 3-2, on Saturday in Hamden in the second and final game of a weekend series.

Despite getting swept (3-2 loss on both days), head coach Cassandra Turner was impressed by her team’s fight and sees this team making the necessary adjustments to win.

“I think we showed a lot of really good things and we need to keep getting better,” Turner said. “I’m happy with some individual efforts and I’m happy with spaces on the ice that were probably as good as we’ve ever been. We just have to grow with the puck and find ways to get it into the back of the net.”

The game started off with a first period that ended up scoreless, but finished with 20 combined shots and nine combined penalties.

Although Ohio State would take the lead to start the second period, Quinnipiac captain and senior forward Melissa Samoskevich got herself a breakaway opportunity and put the puck past Ohio State sophomore goaltender Amanda Zeglen’s left shoulder to tie the game at one.

Ohio State started to regain the momentum in the third period as sophomore forward Tatum Skaggs scored twice to give the Buckeyes a 3-1 lead. But Samoskevich’s second goal was one that even she feels was lucky as she was able to sneak the puck to the opposite side of the net while being behind the net.

“I was getting down low and tried to slide the puck towards her feet,” Samoskevich said. “It was a bad angle so I just threw it towards the front of the net and I’m fortunate that it went in.”

The luck would only take the Bobcats so far as they got a power play within the final minute, but could not capitalize and finished the day being 0-for-4 on power plays.

How does Turner feel that her team has yet to score on a power play? She believes that with the new system implemented, the power play will improve with more games played.

“It’s early and both of our units are brand new,” Turner said. “I think we have a lot of work to do, but I also think that the conversations they are having as a unit, the performance isn’t in as bad of a spot as the stats show.”

Quinnipiac sophomore goaltender Allison Small made her first start of the season on Saturday after junior Abbie Ives started on Friday. With facing the No. 7 ranked team in the country, and it being her first start, Small faced 35 shots and was able to save 32 of them.

Turner feels she has a good problem at the goaltender spot, and believes both of her goaltenders have yet to play their best.

“Small had a really good offseason and worked very hard,” Turner said. “We have great goaltending, but we just need to find ways to keep the goal total under three.”

The Bobcats will have to turn the page to next Friday and Saturday, as they play a back-to-back games against Maine at home.

“I think this team is going to grow differently then teams we’ve had,” Turner said. “They’re so attentive and willing to put in the work to get better so I look forward to next weekend and to see what they accomplish this week.”