Quinnipiac women’s soccer tops Iona, improves to 2-0-1 in the MAAC 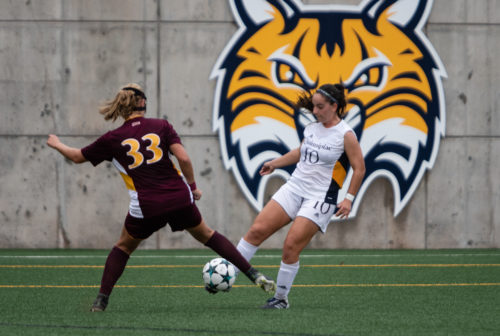 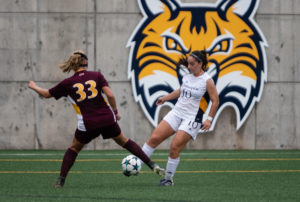 With that win, not only were the Bobcats able to bring their record over .500, but they were able to keep their MAAC record at 2-0-1 in three games.

The game started out with the Bobcats imposing their will against the Gaels. They were beating them defensively by hounding Iona players, poking balls loose and not allowing the Gaels to get a shot on net, only allowing one shot on goal in 24 minutes.

As time went on, the Gaels were able to wear down the Bobcats defense and create shots of their own. No shots were recorded until 20 minutes left in the first period, when junior goalie Olivia Myszewski saved a shot from a Gael player. At this point, the tide started to go in favor of the Gaels, who were almost doing anything they could against the Bobcats as the Gaels were able to shoot at junior goalie Olivia Myszewski three times in seven minutes.

Going into halftime, the game seemed like it was going to be a good fight, with both teams clawing at the bit to get any lead they could as the game is at a deadlock at zero, but head coach Dave Clarke did not think the Bobcats did well in the first half and solved their problems in the second half.

“We didn’t play on what we worked on in the first half,” Clarke said. “No shots, no crosses, no deliveries, just bad decisions. We slowed the game down way too much, changed a little bit in the second half. The goals, it was working right. The goals came and then we did what we were supposed to do, put them back in and that’s a game you need to close out.”

From the start of the second half, it seemed as if Clarke lit a flame under the Bobcat players. It seemed like Quinnipiac took what it did in the beginning of the first half and replicated it for the whole second. This was shown very early in the second half, when the Bobcats got their first shot of the game two minutes into the second half.

Not long after that first shot, the Bobcats were able to get on the board first at 53:24 on sophomore forward Kelsey Goldring’s fourth goal of the season, breaking the tie and putting the Bobcats ahead 1-0.

The Bobcats continued this teamwork when they were able to put four shots on Iona freshman goalie Emma Havrilla. One of those shots resulted in a goal for the Bobcats at 65:49, this time from senior forward Al Pelletier, getting her second goal of the season and the Bobcats an astounding 2-0 lead.

Not long after, the Gaels were able to get on the board at 67:26 with a goal from junior midfielder Amber Crispin, getting her third of the season and cutting the lead to one with 23 minutes remaining. From this point, all the Bobcats needed to do was play defense – and that’s what they did – as they secured the win against the Iona Gaels, 2-1.

On Saturday, Sept. 29, the Bobcats go to play the Niagara Purple Eagles at 1 p.m. at Niagara Falls, New York. Clarke knows what he and the soccer team must work on in order to preserve their 2-0-1 MAAC record.

“We need to score more goals first, but the road trip up there is what we got to focus on first,” Clarke said. “We will reflect on the game tomorrow and hop on the bus and hopefully find our legs. We may freshen up the squad a little to give some people a rest and put some new people in. But for now, we’ll go from there.”