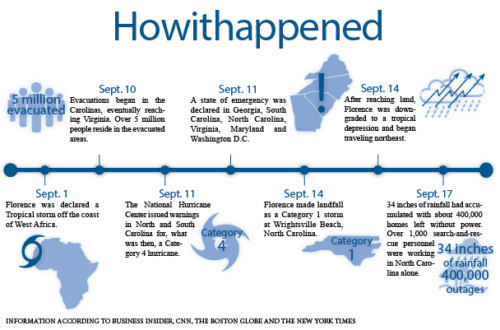 Hurricane Florence has swept the country’s attention, leaving damage to large portions of the east coast. The ongoing storm has caused at least nine deaths in North Carolina, Business Insider reported on Sept. 15.

Many Quinnipiac students in the northeast may have felt far removed from the plight of the southeast. Here’s what the Bobcats should know and can expect going forward from superstorm Florence. 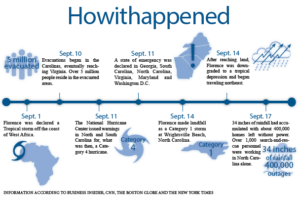 [/media-credit]Hurricane Florence began as a tropical storm Sept. 1 over the Cabo Verde islands off the coast of West Africa. The storm peaked as a Category 4 hurricane and sustained winds of 140 mph. It officially made landfall as a Category 1 hurricane Sept. 14 in Wrightsville Beach, North Carolina. The storm was downgraded that night to a tropical depression and is currently moving northeast.

A state of emergency was declared in Georgia, South Carolina, North Carolina, Virginia, Maryland and Washington D.C. the week of Sept. 10 as North Carolina alone was expected to receive 9.6 trillion gallons of rain. This is enough to cover the entire state in 10 inches of water.

“I cannot overstate it: Floodwaters are rising, and if you aren’t watching for them, you are risking your life,” North Carolina Gov. Roy Cooper said in a Sept. 15 Associated Press report. “It’s an uninvited brute who doesn’t want to leave.”

As of an article done by the AP Press on Sept. 17, heavy rains have risen to nearly 34 inches from Thursday through Sunday in Swansboro on the North Carolina coast, according to the National Weather Service. About 400,000 outages still leave residents in the dark in their homes.

Damages are estimated at about $17 billion to $22 billion in lost economic output and property damage, according to economists at Moody’s Analytics.

Over 1,000 search-and-rescue personnel equipped with 36 helicopters and over 200 boats were working in North Carolina. The Defense Department also assigned 13,500 military personnel to help relief efforts.

North Carolina is facing serious flooding issues throughout the state that are still threatening over a week after the hurricane’s downfall. North Carolina Gov. Roy Cooper has said Saturday Sept. 22 that nine of the state’s river gauges are at a major flood stage and four others are at moderate flood stage.

Cooper encouraged residents to avoid driving east of Interstate 95 and south of US-70 as certain areas of both roadways are still underwater. He also urged residents of southern North Carolina to stay alert for flood warnings and evacuation orders.

North Carolina’s transportation secretary, Jim Trogdon stated in an interview with CBS News that 114 primary roads are currently closed and there are 547 total closures statewide. Emergency officials don’t expect the water on those highways to recede fully for another week or possibly longer.

Forty-three people have died since the storm hit the coast more than a week ago. Additionally, there have been 5,000 rescues reported in the state, Cooper said, of which some have been able to return. Cooper said that 2,600 people and 300 animals have been moved to safety as of Sept. 17.

Returning home is the first step towards rebuilding. The nonprofit Institute of Inspection, Cleaning and Restoration Certification (IICRC) suggests that the severity of the damage caused during flooding in a storm increases the longer it sits, but BELFOR Property Restoration Chief Executive Sheldon Yellen warns not to go back until officials local officials give the OK.

Upon returning home, it is important to note the various forms of damage so they can be addressed individually. Fungus, which can overtake a home in as little as 48 to 72 hours according the IICRC, need to be ventilated as soon as possible. If the house has electricity, turn on fans, but never heat.

Addressing the issues first-hand prevents the time it takes for professionals to come in to help with clean-up. Many people spend weeks to months waiting for assistance that could have been addressed in DIY form much sooner.

Correctly timing reconstruction is key in waiting till everything is dry before beginning to rebuild. Building on top of wet and moldy material will only ensure the life of mold. Getting an expert’s opinion is crucial to ensuring that the foundations are ready to be built on.

How Florence got its name

Hurricanes are named by the World Meteorological Organization, an international committee based in Switzerland. The organization maintains and updates six alphabetically-arranged lists of Atlantic, Eastern North Pacific and Central North Pacific tropical storms as they accumulate over the years. The lists are used in rotation and are recycled every six years. The purpose of naming a tropical storm is to help people more easily identify it in its region and to better facilitate risk awareness.

** According to an article by CNN