The wrath of Bell 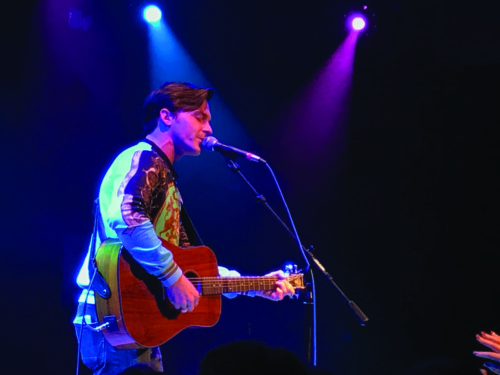 The “Drake & Josh” child star turned acoustic rocker took the stage not long after 9 p.m.. Bell, dressed in black skinny jeans and a tribal looking shirt, began his set with a selection of some of his latest musical offerings. 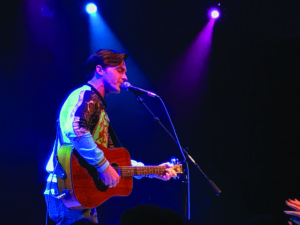 [/media-credit]Stripped down and heartfelt, Bell’s knack for strumming a guitar and softly singing pop-rock was on full display through his newer material.

That recent material was one of the biggest surprises of the evening. A quick scan of Bell’s iTunes page reveals three studio albums, two extended plays and a soundtrack album. The 32-year-old is a far more active musician than what his public persona suggests.

The college age mob was not shy in reminding him as to why they sacrificed $25 and their Friday evening. Repeatedly chanting “theme song, theme song” – suggesting he recite the opening number from “Drake & Josh” – it was clear that it was not to hear Bell sing his heart out on anything unrelated to Nickelodeon.

Not succumbing to the pressure, Bell persevered through a setlist featuring a handful of his latest songs, before erupting into “Makes Me Happy” and “I Found A Way.” Admittedly, the ending made sitting through a few snoozers worthwhile.

He may have stuck to his guns, but Bell was not happy about the crowd’s feedback, read a since deleted tweet from Bell’s account.

“Screaming ‘theme song’ in the middle of other songs is not going to make me play it any sooner in the set,” he tweeted.

Posted Saturday morning, it’s only reasonable to infer that Bell was referring to the prior evening’s affairs.

That tweet expresses a frustration on Bell’s part that is unfounded, but understandable.

Putting oneself in Bell’s shoes, it’s easy to imagine being annoyed by the situation presented. He is touring to promote new music, trying to connect to his audience with new sounds and more mature songs. But his effort seemed lost on the buzzed crowd; they wanted the Drake Bell from “Drake & Josh” –  regardless of the 11 years separating him and the series finale.

While that may be stagnating to a 32-year-old still trying to find his professional footing, Bell managed to fill a college town nightclub on a Friday night, all without having a hit song in over a decade. That in and of itself is impressive and almost unheard of. But getting a crowd would be impossible  without the “theme song” crutch – which was made overwhelmingly obvious to be the only reason most of the audience was even there.

And maybe that was for good reason. Bell’s latest work blurred together – and not in a good way. John Mayer-esque, breezy and nonchalant, the five or so songs he recited before the finale were uneventful. They were pleasant, and Bell is by no means a bad musician. His guitar playing remains as agile and ever and his voice continues to exude a boyish charm. But more talented than the next dive bar cover artist? Debatable.

And in that sense, it’s tough to feel bad for Bell. Considering the music he’s produced since his Nickelodeon days, it’s remarkable he can book the gigs as he does.

Drake Bell is by no means the only musician, or even celebrity who faces a similar plight. There are so many whose former stardom incessantly won’t get out of their way. They are doomed to strictly be a nostalgia act.

It’s possible to escape the mold, though. Ariana Grande, Selena Gomez, Justin Timberlake and Demi Lovato all went from child stars to pop stars in a fairly smooth transition. They are the exception, though. Not the rule.

This is not to say that Drake Bell put on a bad show. He engaged the crowd, skillfully riffed his guitar and provided a strong vocal showing. It is to say, however, that it was the Nickelodeon produced music that brought the concert goers. And without that, Bell is no different than  another singer-songwriter, looking for someone to listen.