Chuck of all trades 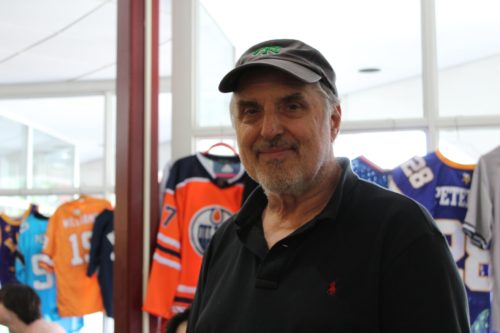 Chuck Blue doesn’t have the most well-known name at Quinnipiac, but his face is one of the most recognizable here. He sits in the Student Center behind tall stacks of old records and hangs up jerseys that catch the attention of any passersby. It’s common for him to strike up conversations with Quinnipiac students because he finds them kinder, more aware and more knowledgeable than those he meets at other schools. Students who meet Chuck Blue tend to find those same qualities in him.

Blue was born in Budapest, Hungary in 1952. When he was about 5 years old, he and his parents escaped Hungary during Soviet military occupation and lived in Austria as Hungarian refugees. In Austria, he learned to speak German. Two years later, he and his parents moved to the U.S., where he was pressured to quickly become fluent in English. Not only did Blue need to learn two languages in the span of two years, but he had to quickly adjust to the culture.

“It was rough,” he said, chuckling. “You have to remember the time period was about 15 years after World War II, so there was still a very strong anti-Nazi kind of element still pervading the culture. So because of the way I looked and because my demeanor at the time was very Germanic-looking, I was perceived as being a kraut or a Nazi or whatever…I also had an accent at the time. I very quickly dropped the accent; I learned how to speak the language really quickly – out of necessity. I was winning spelling bees within a year after coming to the country. I had to.” 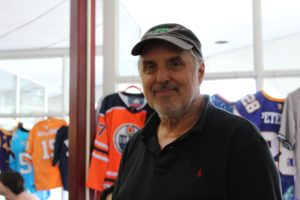 [/media-credit]From there, Blue grew up in Stamford, Connecticut and he’s been visiting Quinnipiac as a vendor for 35 years.

“A friend of mine, who was in the jewelry business, thought that I was a good salesperson and recommended getting into the college circuit at the time,” Blue said. “Quinnipiac is one of the few schools I have left from that time.”

Blue started with schools like Wesleyan University and University of Connecticut, but has since cut back.

One of the reasons Blue keeps coming back to Quinnipiac is that he believes the people are consistently kind.

“You guys are so polite and so aware … everybody is always so nice to open doors for me and pick up things that I’ve dropped … I don’t get that in every place I go to. I would say that your politeness-level and gentility has always stayed the same… you guys are good people here.”

Along with jerseys, Blue sells a lot of records. In the past several years, the listening medium that many people predicted would become extinct has made a huge comeback.

“It was a big surprise to me,” Blue said. “I’m not even sure what made me bring ’em here. To be honest, it still surprises me. I do recordings and I do not think the quality of vinyls is better than CDs, personally. But I would say if I spoke to nine out of 10 students, they would say the opposite.”

Blue thinks so many people like vinyl because they are attracted to the aesthetic and allure of the period records came from. He claims that people associate records with the music of the 60’s and 70’s and view them positively because of the excellence of that music.

“There’s a certain romantic element to the way things were when the great bands were around like The Beatles and The Stones and all that,” Blue said. “Records were really happening back then like 35, 40, 50 years ago. So I think that’s part of the element; there’s a great allure…And I think subconsciously all the kids know that the music sucks now,” Blue laughed.

This distaste for current popular music is not just Blue’s effort to glorify the classics, but rather a judgement based on his musical expertise.

“When I listen to music, I really listen for the nuances. I listen for subtleties. I’ll be honest, I’m not getting a lot [from the music of today]. ”

Blue mused about his own musical preferences, using them to explain his stance.

“You know, I’m a jazz guy, so I like overtones and weird chord patterns and stuff. I’m always listening to what’s disjointed and has interesting sounds to it. I’m not really being challenged by much of today’s music.”

Blue has been a self-taught pianist for about 60 years. In high school, he played jazz, blues and rock. In addition to playing the piano, he plays the flute and the harmonica.

He’s currently part of a two-man band called “In the Muse” and has sold his 2016 album, “Eclectic Cafe”, at his table in the Student Center and online.

Many dedicated musicians work with companies to promote and sell their albums. Blue, however, never has.

“I never work with companies. I always did everything. I was always an independent…That’s all I know. I just don’t know how to follow anybody else’s rules,” he said.

Despite the fact that Blue began playing piano at the beginning of his life, he says he’s become a much better musician in the recent months than ever before. He owes this partly to a transcendent mindset that he has been experiencing lately.

“I think presently, I’m really being shaped,” he said thoughtfully. “I’m getting closer and closer to ether. I’m just feeling more and more in tune with my cosmic wellbeing. It’s kind of late in life but I feel very, very…I feel divine, you know? I guess I’m getting closer to God, I’d say, if I had to sum it up.”

As Blue reflects on his own life and how his experiences have made him who he is today, Blue offers some words of wisdom for Quinnipiac students:

“Follow your vision. Don’t let naysayers say no to you. Don’t let anybody ever tell you that you’re not good enough or you can’t do something. Even when it appears that you are not good enough and can’t, it doesn’t matter. Really, really be stubborn in what you want. Like, really be stubborn. And I always tell my kids now: it’s okay to be selfish. ‘Cause you know, the world teaches you – especially ‘cause I was raised Catholic – you can’t be selfish. No, you can be selfish. You can be very, very selfish for what you want in life. Get it for yourself. Go after it. No holds barred.”

“Eclectic Cafe” by Blue’s band, In The Muse, is available for purchase on Amazon, SoundCloud and CD Baby.