Bobcats Around the World: ‘Footy’ phenom 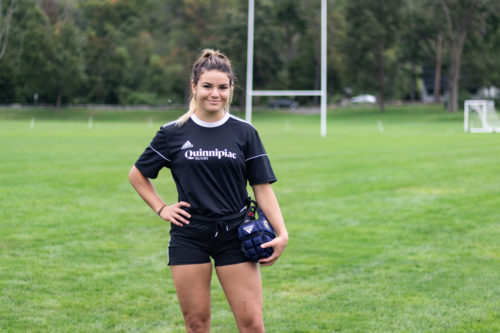 When considering your options for college, most students take their time, spending months scouting out schools and being tedious on where they want to spend their next four years.

It couldn’t have been more of the opposite for Quinnipiac rugby freshman Margot Vella.

“I made my decision really impulsively,” Vella said. “I was like, ‘I’m just gonna go.’”

Vella hails from Leppington, Australia, a suburb of Sydney. It’s a little over 10,000 miles to get from her Australian home to her Hamden residence. The fact that she made that decision so quickly is something to marvel at. 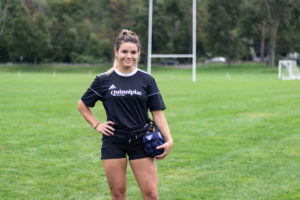 [/media-credit]“I didn’t make my decision until two days before I actually left my country,” Vella said. “I booked a flight because the guy who scouted me said if you want to come, you have to be here at this date and I was like ‘Okay, I’m gonna be there.’ So I booked my flight and two days later I left the country.”

Backtrack a little bit to this past March and that’s when the process all started. Vella played for a club rugby team in Australia called Illawarra. The team travelled to Hong Kong in the spring, where they competed against other countries. While Vella had her focus on playing against teams from Singapore and Hong Kong, Quinnipiac had its focus on her.

“[The scout] asked me if I wanted to come play and I looked into it a little bit further,” Vella said. “He gave me his information and I saw the campus and it was really pretty. I had heard that it’s a really good academic school so I knew I definitely wouldn’t be wasting my time if sports failed, I’d have a backup plan. I thought it would be a great opportunity.”

As you could imagine, it was quite the change for Vella. But the adrenaline rush of coming over to another country didn’t quite put in perspective what the change actually meant.

“It kind of emotionally didn’t hit me until I was over here in America,” Vella said. “And I realized I couldn’t see my family, I couldn’t see my friends. It did kind of had a delayed onset for my emotions. It’s been a big change but the girls and the friends I have here have been really supportive, so I’ve been dealing with it fine.”

Not only was a change of scenery the situation with Vella, but a change in rugby.

In Australia, the rugby, or “footy” as it’s called down under, is played with seven players on the field, as opposed to the 15 players in the U.S. So, when Vella came over to begin her career at Quinnipiac, she was playing a style of play that she hadn’t experienced before.

“[Adjusting] from Australia to America footy, it’s very different,” Vella said. “I think our Australian football isn’t as structured, we kind of just throw the ball around, we have a few plays that involve maybe like three people and then some support work. Here, we have the whole back line involved in our plays and the forwards have such structured positions and I think it works really well. For us, it’s worked well in just providing guidance on how to play.”

Quinnipiac head coach Becky Carlson knows what skills Vella gathered while playing 7’s, but is also seeing how the transition has been for the Aussie.

“Margot’s speed is obviously a huge weapon but speed without an understanding of angles and vision weakens that weapon,” Carlson said. “She has all three and despite coming from the 7’s game she has adapted well and used the weapons efficiently for 15’s.”

While Vella is adapting to game play, the team is adjusting to unfamiliar territory. After winning the NIRA championship the last three years, the team is off to a 1-2 start. While the results may not be there, there were certainly positives to take away from their first few games.

“The girls have really high standards because of their reputation,” Vella said. “They hadn’t lost a game at home until this year so that was a big wake up call for us that we need to work on our weaknesses. But I think the losses really helped us identify specifically what areas needed work rather than versing easy teams where we could’ve won.”

Seeing what this team is capable of has boosted the team’s overall confidence from where they were to start to now.

“We’re a lot more confident,” Vella said. “We believe in ourselves a lot more now. We always believed in each other, but now we really know the abilities of each other and we can trust each other and try new things on the field as well.”

Individually, Vella has stood out this season. She’s one of two freshman who already have recorded two tries, the other being Clara Lemal-Brown. Given the fact that the team lost so many seniors, including standout Ilona Maher, the freshmen have a big role to fill, but Vella believes the group has that ability.

“I definitely think we’ve brought a lot of energy to the team and a lot of athleticism,” Vella said. “A few of the freshman are forwards, but we’re mainly backs, so I think more of that energy outside the field.”

Carlson reiterated Vella’s point, saying the freshmen “bring a new energy and are prepared to work.”

In terms of individuality, the speedy wing brings about characteristics that gel well with the team, both on and off the field.

“I think her spirit and willingness to work fits in well with this new group,” Carlson said. “And I wouldn’t credit that to her being an international student as much as I would her just being an all-around great person.”

Quinnipiac is still looking at five games remaining on the year before the NIRA playoffs start. Even though it may feel early, after this weekend’s matchup on Saturday, Sept. 29 with Notre Dame College, the season will be halfway over. The team will be looking to build a winning streak after they defeated Norwich on Sept. 15.

Vella will need to continue to secure tries, but Carlson believes that Vella will ultimately be filling whatever necessary role for the team.

“Margot’s role will be one that she defines and given that she is such a team player I think it will depend on what the team needs and she will answer the call,” Carlson said.

Being only a freshman, Vella is just beginning her time here at Quinnipiac. In addition to finishing this seasons, she is still looking at three more years here as well. But the question of what to do after Quinnipiac left Vella pondering her options.

“I’m not really sure yet,” Vella said. “I’m supposed to be here for four years which is a really long time for me. After I’m not sure if I want to take up rugby here or if I want to try back home because it is home and it means a lot.”