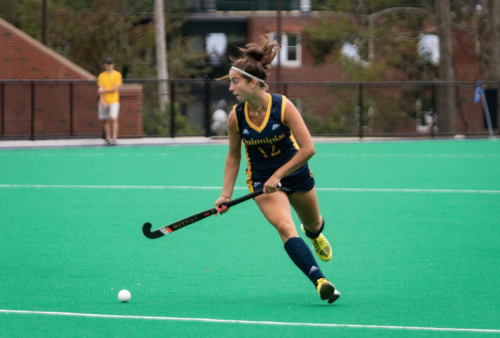 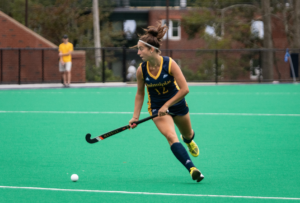 [/media-credit]In one of the premier games of the season, the Quinnipiac field hockey team came with one of its best performances, as the Bobcats beat Georgetown 2-1 at the Quinnipiac Field Hockey Stadium on Friday afternoon.

With that win, not only did the Bobcats secure their first Big East victory of the season, but they were able to even their record at 4-4 on the season.

Even though the Bobcats were successful in getting the win, head coach Becca Main was not pleased with how the team controlled their emotions and the strategy the Hoyas came out with.

“We struggled today with the emotion when you play a Big East game,” Main said. “Nobody comes into a Big East game prepared and Georgetown came in totally different than what we scouted all week. Very emotionally involved, they looked great, they stepped to the ball and they obviously gained confidence they had one of the best starts to a season ever. They’re 6-2 now and they came in today playing that way, so we had a little trouble. We were a little annoyed with their energy and the way they stepped up to us, but I liked the way we worked it out and decided ‘This is the way you’re going to come, this is the way we’re going to come.’”

The game started and finished in a very physical manner, with both teams having a total of 86 fouls throughout the whole game. The game first broke open with a goal from the Hoyas from junior forward Lindsay Getz after a miscommunication and a costly turnover from the Bobcats halfway into the first half. Looking like they were going to go down one goal going into the half, Quinnipiac came back with a goal of its own from senior midfielder Elisa Ruiz Martinez almost five minutes later, allowing the Bobcats to go to the half tied at one.

From this point, the second half is where the energy and the emotions picked up.

The second half started out very slow until the last 12 minutes of the game. It was then that the Bobcats finally took the lead with the help of a corner shot by freshman forward Elisa Van Winkel, getting the team both the lead and the motivation needed to get the win. From that point on, the main strategy that the Bobcats were going with was to manage the clock and not allow the Hoyas to score.

Junior captain Valerie Perkins described what was being said during the timeout with a little under five minutes left in the game.

“We knew we wanted to manage the clock, not try to slow things down, not take quick restart. We kind of wanted to make sure we were passing it to each other, 100 percent passive, keeping possessions, so we can come out with the win.”

As the Bobcats go into the next couple of games, at the UMass Lowell River Hawks on Sunday, Sept. 23, and at the Liberty Flames on Friday, Sept. 28. Ruiz Martinez does not think they need to make any adjustments, rather to be  ready when the ball drops and the game starts.

“We know Liberty is really good team and we won against them last year, so we are really excited to play against them,” Ruiz Martinez said. “We go to their field, so I think it is going to be a good opportunity for us to play against a good team. It will make the team better.”