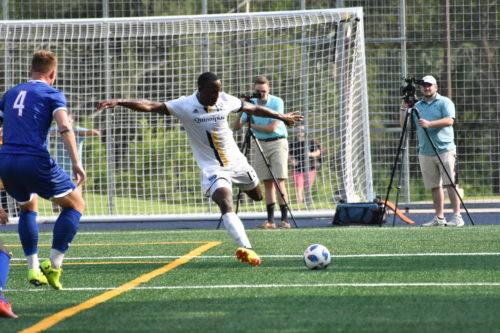 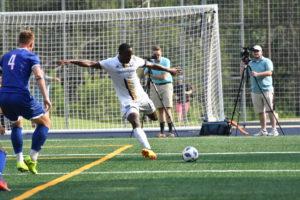 Despite the victory, head coach Eric Da Costa still wants his team to play a more consistent gamer no matter the competition.

“In the first half, I felt we were a little too flat,” Da Costa said. “I think we underestimated them, even though we had a lot of time on the ball because we didn’t have the last four-to-five games due to the nature of our opponents. We took too much time on the ball and had too many touches and it led to a game of transitions when it didn’t have to be.”

The Bobcats started off the game by striking first as their senior midfielder and captain Matthew Taylor launched a kick 30 yards away from the box as it was able to find the back of the net to give a 1-0 lead.

CCSU didn’t give up as senior forward and leading goal scorer Louis Beddouri netted one to tie the game late in the first half.

Taylor wasn’t done, as both teams ended up in a stalemate until Taylor scored his second goal of the game in the 76th minute to ultimately lead to a 2-1 win. Taylor is the fourth Bobcat to score a goal this season, with freshman midfielder Oriac Vila Roxtes and junior midfielder Romain Daniellou scoring goals in their 2-1 overtime win against Albany. Junior forward Eamon Whelan added four goals in the first five games.

Although Taylor is the one who gets the credit on the scoresheet, he gave his teammates credit for making the necessary plays.

“Came to me, Jeppe (Haerhe) with the brilliant ball, and I took it down was able to see the space and it deflected and went in,” Taylor said. “The second one was perfect positioning at the edge of the box and I just hit it in.”

Quinnipiac had to adjust to a more physical style of play on Friday as three players received yellow cards.

Graduating in 2001, Da Costa cites the history of these two teams playing as reasons for the increased physicality.

“In the old NEC, Quinnipiac vs. CCSU was a battle,” Da Costa said. “A lot of good play, bad play and red cards. For me it was great to see a local game filled with that type of competitiveness.”

As for what’s next for the Bobcats? They are finished with out of conference games and look ahead to their first MAAC game of the season Wednesday at Canisius.

Da Costa knows that his team has had its challenges at the beginning of the season, but understands that it has prepared them for what MAAC competition is going to look like.

“As we move towards the second half of the season, our non-conference games are used to prepare us and show what we need to play like going into conference games and learning lessons on how to pick up points during these games,” Da Costa said. “Now we move into league play and it’s not a flip of the switch but were prepared as to what happens within the next 10 games and what our season looks like.”