Bob Woodward’s ‘Fear’ was important for our country 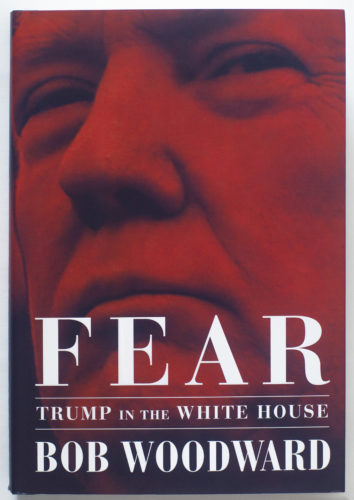 Since Trump’s induction into the White House nearly two years ago, the United States and its citizens have witnessed him on his personal social platform, in derailed speeches, in ghost-written novels and in occasional secretly recorded sessions.

Now, the country has a contemporary taste of its president in Bob Woodward’s most recent non-fiction book, “Fear: Trump in the White House.” It is frightening in its honesty, and inspiring for reporters everywhere – whether they are intrigued by investigative journalism like I am or not.

For example, in “Fear,” citizens can now read and catch a glimpse of the president’s propensity for eating.

“Trump arrived and sat down. Hot dogs and hamburgers were laid out. The fantasy diet of an 11-year-old, Bannon thought, as Trump wolfed down two hot dogs.”

Taxpayers can likewise cite, as Woodward writes, what his investment bankers do, “to derail what they believed were Trump’s most impulsive and dangerous orders.”

U.S. citizens can also read that which Trump thinks, but is not on his Twitter handle.

For instance, in an interview with Woodward, Trump is quoted saying, “real power is – I don’t even want to use the word – fear.”

Published this last week on Sept. 11, Woodward’s book takes us through a descriptive journey of the current presidency through hundreds of interviews with members of Trump’s administration.

As a reporter, this book galvanized me and reminded me to remain inspired by unwavering investigative journalism.

The Daily Herald described “Fear” as “an important book, not only because it raises serious questions about the president’s basic fitness for the office but also because of who the author is.”

When I first heard about Woodward, I was intrigued. This man, who had broken one of the largest cases in American history, The Watergate Scandal, was not just a reporter off the street.

Woodward was resolved. He was unfaltering. He once said that, “journalism gets measured by the quality of information it presents.”

This concept – quality over quantity – is the definition of good journalism. Stories of such caliber requires in-depth analytical researching and a broad scope of testimonies. Woodward, in particular, took extensive records of “almost all” of his interviews.

I began to learn more about him, and his strategies, when I started a class directed by him on Masterclass. I read his articles from the early 1970s and researched his avid following of George W. Bush in his presidential administration. Prior to “Fear” coming out, I had never read any of his books.

I won’t be making that mistake in the future.

“Fear”, and its publication, struck me to my core. The last two years have consisted of pushback against Trump from both Democratic citizens and the press alike.

Yet, the United States had not before seen the state of conflict within the White House or what our president says within the confines of his Oval Office.

As I read the book, I grew less and less appalled at the discoveries Woodward released. It was the first chapter specifically that most unnerved me.

Woodward begins the first chapter with a scene of Trump, in a private setting. It is set back in 2010, where Trump was questioning the possibility of campaigning a second time. While the public heard about his official candidacy in 2015, Trump had considered running for many years before.

In this first chapter, a fervent David Bossie, a “longtime House Republican investigator and conservative activist,” and Steve Bannon arrived at Trump Tower in New York City. After Bossie sat down and described to Trump what he would need to do to have a successful campaign, Bossie admitted that Trump had “some problems on issues.”

In particular, Bossie argued that Trump would need to support the pro-life movement.

Without thought, Trump replied, “That can be fixed. You just tell me how to fix that. I’m–what do you call it? Pro-life. I’m pro-life, I’m telling you.”

Prior to this moment, Trump was strictly pro-choice in his public opinion. He donated to abortion groups and openly made statements supporting the pro-choice movement.

This quick and reckless change of opinion is dangerous, in my mind, for any man or woman with political standing. It reveals that the only intent he has for taking a stance on a critical issue is to gain votes.

When citizens vote, they are electing not the person but the priorities and principles their candidate says they value.

This book has done something that has been attempted, but never mastered. It carefully and meticulously exploits all of the discrepancies in the Trump administration, like the one above. It provides evidence that his advisors and staff consider his actions of that of a “fifth or sixth grader,” according to Military.com.

“Fear” does just this. It highlights the internal problems in our government that we, as citizens, have not yet had a glimpse of. Woodward took these issues, lit them on fire and set them ablaze for the country to witness. This was the book we needed.